How J.Law morphed into Katniss: "Mockingjay" is a perfect metaphor for Hollywood's blockbuster machine 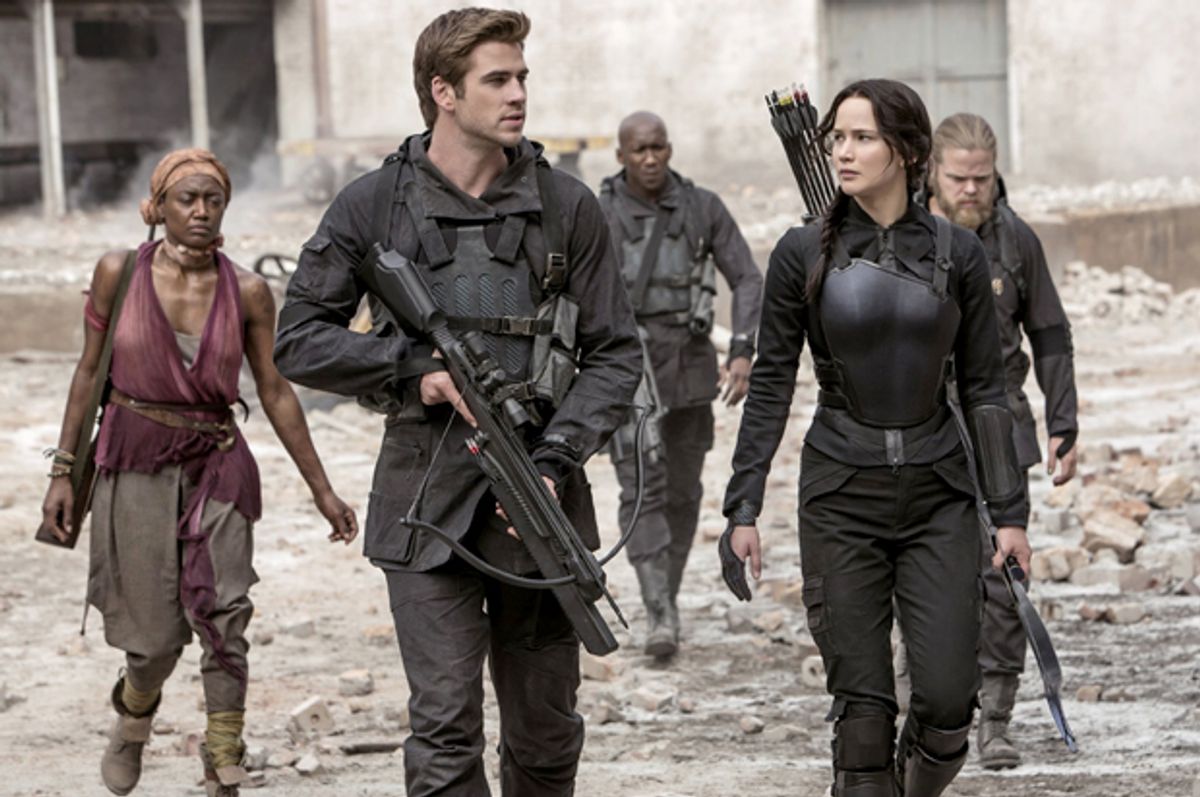 “Mockingjay: Part 1” is about a lot of things: teenage love, coming-of-age, the perils of autocracy and the futility of rebellion (as Andrew O’Hehir dubs it, “the Roman Empire vs. Khmer Rouge”). And funnily enough — although Suzanne Collins couldn’t have known this while she was writing the source material — it also serves as a remarkably prescient metaphor for the tribulations of helming a major blockbuster franchise, with the arc of the Girl on Fire displaying a spooky resemblance to the trajectory of the Hollywood golden girl who plays her.

Much of “Mockingjay”centers on the District 13 rebels’ attempts to force Katniss (Jennifer Lawrence) to serve as the face of the revolution by shooting a series of viral propaganda films for the rebel cause. When attempts at eliciting a compelling reaction out of Katniss in the studio fail, the handlers send her out into the field with a film crew to try to capture some of the spontaneous, crowd-pleasing magic that she worked in the Games.  And it works: Real life happens (a hospital is bombed to the ground), Katniss responds with the sort of unfiltered outrage that made Panem love her, and a star is (re)born. It is both gratifying to see Katniss perform, and deeply uncomfortable — discomfort that registers on Katniss’ face, too — at how tragedy is exploited for the purposes of propaganda. Meanwhile, throughout the film, the things Katniss says and does in these videos become memes: The song she sings spontaneously by a river becomes a battle hymn, her impromptu “when we burn, you burn with us” outburst becomes a rebellion rallying cry.  And, as a number of critics have pointed out, it’s all so very meta: The rebels’ first promo film ends on the same whistled notes that close out the real-life trailer.

In a wonderful piece from last year, Jordan Hoffman asked whether Jennifer Lawrence was “Katniss-ing” us — whether her seemingly “authentic” personal brand is merely a grand show to give viewers what they want, and “if so, how much longer until people get tired of the show?” But even if Lawrence is Katniss-ing us, it is only because today’s blockbuster industry puts her and young stars through a version of their very own Hunger Games. In a (regrettable) interview, David O. Russell had this to say about Lawrence’s commitments to the “Hunger Games” franchise: “I personally think they should give her a bit of breathing room over there because they’re printing money … I’ll tell you what it is about that girl — talk about 12 years of slavery, that’s what the franchise is. And I’m going to get in so much trouble for saying that.” (He did).

Political incorrectness aside, Russell sort of has a point: Now, more than ever, young stars are at the mercy of the franchises that sign them. In the age of the superhero movie and the YA dystopia boom, blockbusters are getting bigger and bigger, with the box office dictated increasingly by franchises instead of individual movie stars. With billions on the line, slim tomes are sliced and diced into multiple films to milk audience buying power, sequels and spinoffs proliferate, and the films themselves becomes almost peripheral to the grueling press tours and constant media scrutiny needed to promote them (Lawrence has been promoting a “Hunger Games” film at a rate of one a year).

What’s more, it is often young, little-known actors who are plucked out of anonymity to anchor these series, tethered by contracts that mean we see them growing up in the public spotlight through their teens and onward. Nowadays, a first outing in the blockbuster arena is always followed by a quarter quell: “Twilight” was five movies, while “Harry Potter” saw eight films stretched over 10 years. As Captain America, Chris Evans is committed to at least six Marvel outings, but probably more. And much like Katniss, the stars of these franchises are expected to exhibit a certain natural aptitude for junkets and red carpets, to offer up an illusion of authenticity while still only coloring, as Vulture’s Hoffman puts it, “just a tiny bit out of the lines.”

So it is difficult — indeed, for me it was impossible — to watch "Mockingjay" and not think of the meme-ifcation and commodification of Lawrence and the other young stars thrust into the center of today’s mega-franchises. In today’s celebrity culture, where virality is our most prized currency and the Internet demands constant, unmediated access to celebrities, stars have increased pressure to appear candid and authentic at all times (It says a lot that the reigning Homecoming King and Queen of the Internet are Chris Pratt and Jennifer Lawrence, who both excel at these moments of “unfiltered” spontaneity.) In hindsight, the relatively unknown Lawrence was a remarkable casting choice, not just because of how good an actress she has turned out to be, but because of how good a celebrity she has turned out to be. When you’re helming a blockbuster franchise, particularly a YA one, you need to be good at playing the game, and the goofy, photo-bombing, red-carpet cool girl is a master at it. Just as Katniss’ spontaneity and unwillingness to conform ironically make her the perfect poster girl for the rebel propaganda movement, so J.Law’s candidness and unfiltered persona have made her America’s sweetheart.

Alas, not all of J.Law’s fellow tributes have navigated the shackles of franchisedom with as much seeming ease as she has: Chris Evans for one has been vocal about his frustrations with fame and his fear about signing his life over to Marvel. As he said in Variety about his reluctance to sign his contract, “The problem was initially, it was a nine-movie contract," he says. "And they said, if these movies take off and do very well, and my life changes and I don’t respond well, I don’t have the opportunity to say, listen, I need a fucking break. That just scared me.” (Once he signed, he entered “panic mode” and promptly went into therapy.) Kristen Stewart, who suffered torturous media scrutiny when she admitted to cheating on her “Twilight” costar Robert Pattinson with her “Snow White and the Huntsman” director Rupert Sanders, has often spoken out about the pitfalls of life in the limelight, calling fame “incredibly lonely."

These days celebrity is tough for all young actors, of course, but there is something particularly oppressive about the modern franchise machine: the way it demands that these stars process through decades of fame with unflagging charisma, as winning and tough as their characters, all while providing us with an infinite stream of off-the-cuff GIF-worthy moments. The narrative of their development becomes a weird patchwork of their real coming-of-age and the one we see on-screen. They have to simulate spontaneity even as they march from one preordained inflection point to another. So "Mockingjay" eerily captures the glassed-in claustrophobia of life as a Hollywood franchise star.

Obviously there are plenty of people more worthy of sympathy than 20-something-year-old A-Listers, and of course there is an extent to which hostile publicity is a necessary cost of celebrity.  Yet being a young star yoked to a franchise these days comes with a new level of unwanted scrutiny that few could sanely withstand. Just as Katniss pleads to the rebels that she never wanted any of this: Her ascent was inevitable from the moment she volunteered as tribute. In a Vanity Fair article about the photo leaks titled “Both Huntress and Prey,” Lawrence weighed in about the real cost of being a Hollywood golden girl. "Everybody can be like, ‘Well, you knew what you were signing up for,’ but you don't. You expect paparazzi to be annoying. You don't expect them to be terrifying,” she told VF’s Sam Kashner. “Just because I'm a public figure, just because I'm an actress, does not mean that I asked for this. It does not mean that it comes with the territory. It's my body, and it should be my choice, and the fact that it is not my choice is absolutely disgusting. I can't believe that we even live in that kind of world. People forget we’re human.”

I’m not going to spoil how the “Hunger Games” series ends, but let’s just say Katniss’ involvement in the revolution ends up coming at a high personal cost. Hopefully life doesn't mirror art and Lawrence is able to retain her dignity and autonomy despite the poking and prodding that comes with growing up in a gilded cage. J.Law has remained remarkably good at being a celebrity thus far, but one need look no further than to some of her young peers to see how easy it is for the star machine that lifts you to simultaneously destroy you. How funny that a movie that represents the apex of the contemporary blockbuster machine should also turn out to be a metaphor for just that.