We all know about turkey and pumpkin pie. But these other Thanksgiving traditions might just stun (and entice) you 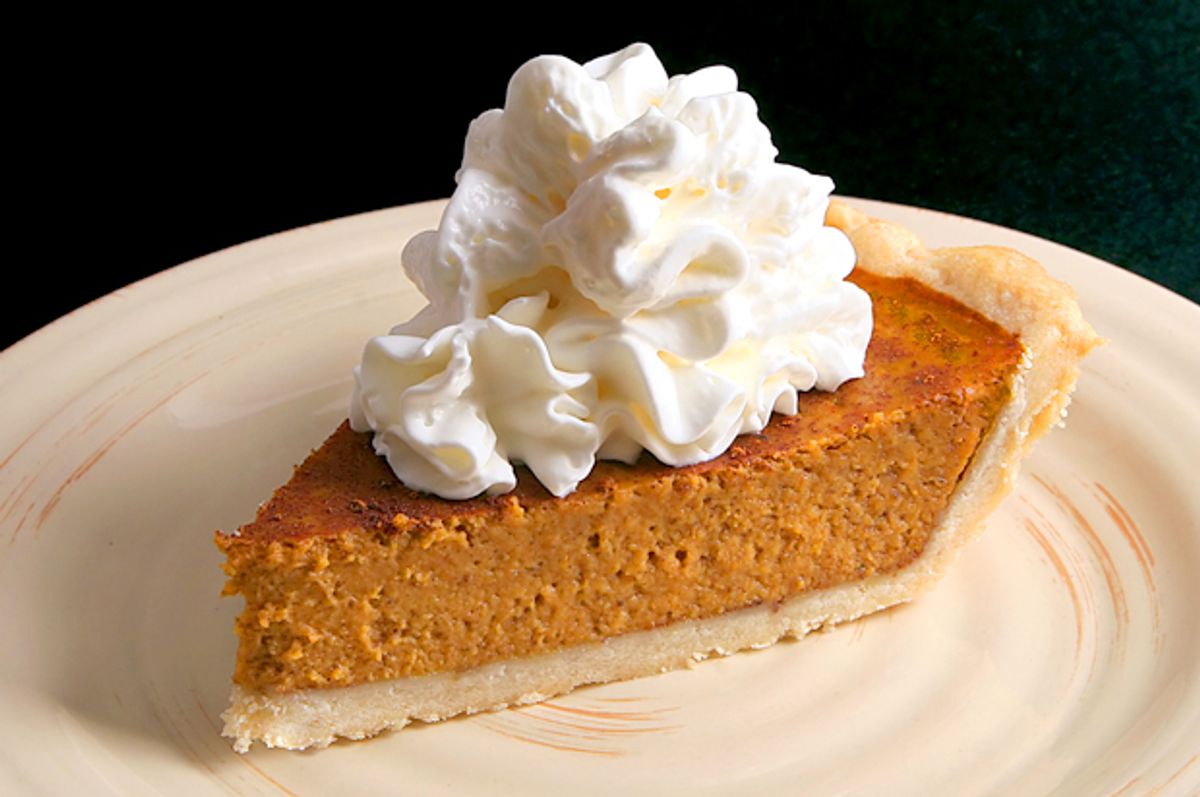 Most of us know the Thanksgiving story from our little pageant in grade school where we put on Pilgrim hats and made construction paper turkeys from a tracing of our hand. We learned that the first Thanksgiving was a beautiful meeting between the settlers and the Indians, who brought us all kinds of delicious food that we still eat today. Unfortunately, that story is mostly apocryphal; but the tradition of the Thanksgiving meal does go way back and we have been eating some version of the traditional meal from the very beginning.

The star of the show is the turkey, of course. But strangely, the stories differ about whether the Pilgrims actually ate turkey at all at that first Thanksgiving, seeing as the native bird was supposedly stringy and dry in those days. So it was likely everybody feasted on fish and wild game instead. Others insist that the turkey was discovered long before the first Thanksgiving by the Spanish conquistadors, who brought the bird back to the Old Europe with them where it was a huge hit everywhere it was served. So in this telling the Pilgrims knew all about turkey and how to cook it long before the Indians turned up with their offerings. Whatever the case, turkey today is not the turkey of yesteryear. Modern science has bred a bird with so much white meat that the poor things are unrecognizable from the svelte birds of the ancient wild.

Stuffing is said to be Americans' favorite dish of the Thanksgiving meal. It has been around in one form or another since Roman times, and there are as many versions in America as there are regions. From oyster to Southern cornbread to traditional sage to Hillary Clinton's favorite "Pepperidge Farm white bread stuffing," the only thing that's changed about this dish is the fact that most Americans don't actually use it to stuff the bird anymore due to the public health warnings about bacteria growing in the cavity. It's too bad. Stuffing in the bird, soaking up all the juices, tastes really great. And yes, some people call it dressing instead of stuffing. They are probably from the South or from England, which changed the name to dressing during the Victorian era because the word stuffing was considered vulgar. Expressing what type of meat you preferred must have made Thanksgiving a terrible trial for English visitors at the time. ("I'd prefer a limb, thank you.")

Virtually everyone serves mashed potatoes and gravy. These need no explanation. There was a time when this dish was served pretty much nightly on American dinner tables. There's nothing particularly special about it except that it's a delicious, perfect amalgamation of salt, fat and starch. Even the healthiest eater in your family can be seen sneaking spoonfuls of it directly from the leftover plate in the fridge. At 2 in the morning. Cold.

And then there is the traditional relish tray featuring celery and olives. What?  You don't serve a traditional olive and celery tray? Well, at one time it was considered the most special part of the meal. In fact, it was a delicacy from the 1700s all the way up until the 1970s. I know. Go figure.

And then we have the all-American processed, manufactured plastic foods that we just can't seem to get enough of. Many of these dishes go back to the turn of the 20th century, but at least a couple come right out of the atomic space food kitchens of the 1950s and '60s. Let's just say that no self-respecting Pilgrim or Indian would have gone anywhere near that bizarre concoction known as the green bean casserole. And they wouldn't have recognized the neon-colored gelatinous mass known as a Jell-O mold as food. They would have probably thought they needed to kill it.

It used to be common for appliance and food manufacturers to create little recipe pamphlets. My mother had piles of them. The famous green bean casserole was created by a home economist named Dorcas Reilly who worked in the Campbell Soup recipe kitchen, whose job it was to think up ways to use canned condensed soup in novel ways. Why this particular recipe caught on the way it did is unknown. But catch on it did, and it became a staple of Thanksgiving menus. The recipe: green beans, canned soup, milk and canned fried onions. That's it. Oh, and years later they added a little dash of soy sauce just to make it fancy.

The brightly colored Jell-O mold was likewise the result of an all-American advertising success story, although it happened half a century earlier. Aspics and gelatin had been around forever, but an enterprising couple by the names of Pearl and May Wait found a patent for turning the stuff into a powder, added a ton of sugar and food coloring and the rest is history. My husband's family eats a version they call Green Death. This is considered a good thing.

And then we have the cloying concoction known as candied sweet potatoes with marshmallow topping. Evidently, the first thing home cooks thought of when mass-produced marshmallows became available was that they would make a wonderful substitute for sweet meringue on top of tubers that had been baked in sugar. (Everyone had bad teeth in those days so what the heck, might as well enjoy.) And contrary to popular myth, this dish did not come from the South. Southern cooks prefer their sickeningly sweet candied yams naked, thank you very much. It's the Northerners who went for the sticky, carmelized goo covering; don't let anyone tell you differently.

Finally, there is pumpkin pie. This is one recipe that's been there from the get-go. But again, stories differ on whether or not Columbus and company took pumpkins back to Europe where they perfected the pudding that became the pie or whether the Indians introduced it to the Pilgrims. However it came to be, along with the turkey and the cranberries, it's the most traditional element of the meal and one that virtually everyone serves on Thanksgiving. (Whether everyone likes it is another matter.) It's simple, it's plain, it's very, very old-fashioned. And it's an example in which modern food manufacturing hasn't degraded the dish. If there's one canned good that isn't particularly inferior to the fresh version it's pumpkin. Of course, it isn't really pumpkin -- at least not entirely. It's actually squash or squash mixed up with pumpkin. But who cares? An orange pureed mush by any other name would taste as sweet, right?

These are all traditional Thanksgiving foods. But every family has its own spin along with the traditional. Some Italian-American families frequently throw in a pasta dish or two. Some African-Americans like to add some soul food to the menu. Some Asian-American cooks have been known to stuff their birds with sticky rice. Here in California a lot of us eat tamales as a side dish. And foodies of all stripes make new and interesting versions of the foods we all grew up with.

There really aren't any rules about this, and traditions change as families merge from generation to generation. It's one of the few things that we can enjoy in our culture where nobody takes the various differences too seriously. And right now, that's certainly something to be thankful for.