Hundreds of millions flow to Amazon from the national security state. It's a kind of partnership we shouldn't allow 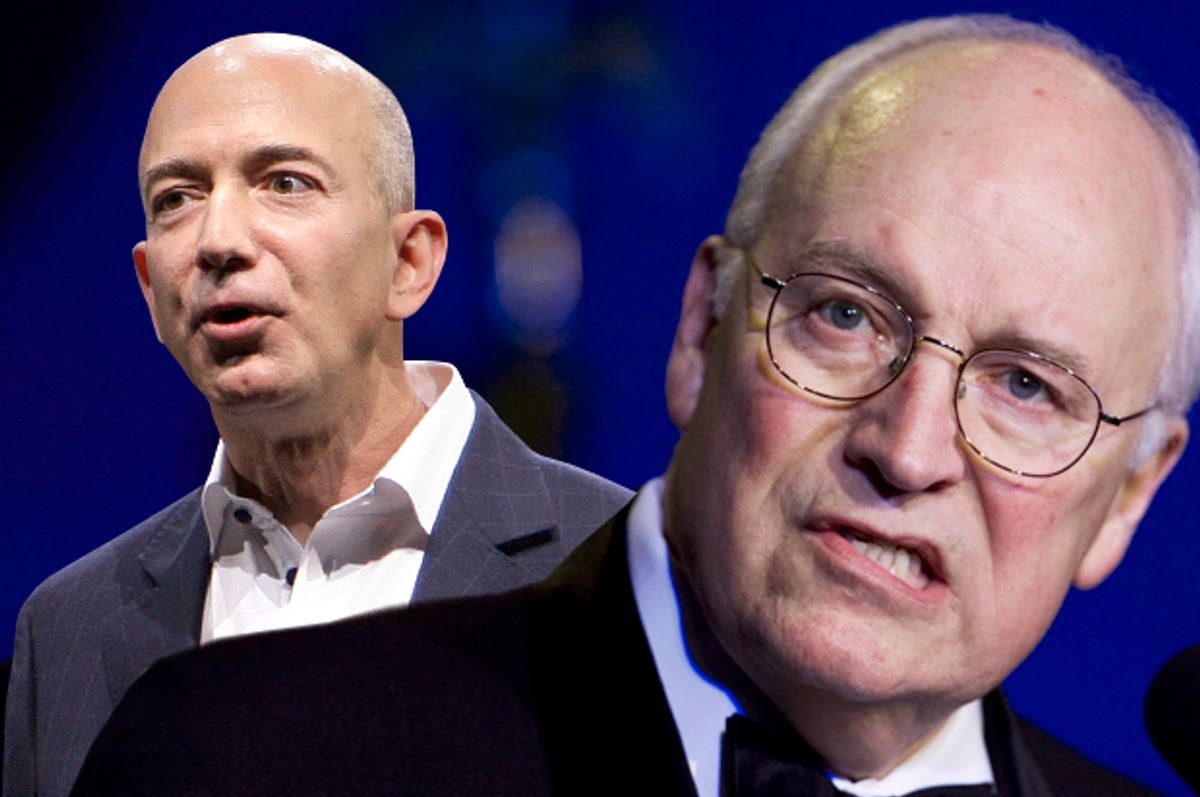 When Internet retailer and would-be 21st century overlord Amazon.com kicked WikiLeaks off its servers back in 2010, the decision was not precipitated by men in black suits knocking on the door of one of Jeff Bezos’ mansions at 3 a.m., nor were any company executives awoken by calls from gruff strangers suggesting they possessed certain information that certain individuals lying next to them asking “who is that?” would certainly like to know.

Corporations, like those who lead them, are amoral entities, legally bound to maximize quarterly profits. And rich people, oft-observed desiring to become richer, may often be fools, but when it comes to making money even the most foolish executive knows there’s more to be made serving the corporate state than giving a platform to those accused of undermining national security.

The whistle-blowing website is “putting innocent people in jeopardy,” Amazon said in a statement released 24 hours after WikiLeaks first signed up for its Web hosting service. And the company wasn’t about to let someone use their servers for “securing and storing large quantities of data that isn’t rightfully theirs,” even if much of that data, leaked by Army private Chelsea Manning, showed that its rightful possessors were covering up crimes, including the murder of innocent civilians from Yemen to Iraq.

The statement was over the top -- try as it might, not even the government has been able to point to a single life lost due to Manning’s disclosures -- but, nonetheless, Amazon’s capitalist apologists on the libertarian right claimed the big corporation had just been victimized by big bad government. David Henderson, a research fellow at Stanford University’s Hoover Institution, explained that those calling for a boycott of Amazon were out of line, as the real enemy was “megalomaniacal Senator Joe Lieberman,” who had earlier called on Amazon to drop WikiLeaks (and is, admittedly, a rock-solid choice for a villain).

“The simple fact is that we live in a society whose governments are so big, so powerful, so intrusive, and so arbitrary, that we have to be very careful in dealing with them,” Henderson wrote. That Amazon itself cited a purported violation of its terms of service to kick WikiLeaks off its cloud was “a lie,” according to Henderson, meant to further protect Amazon from state retribution. Did it make him happy? No, of course not. “But boycotting one of the government’s many victims? No way.”

But Amazon was no victim. Henderson, like many a libertarian, fundamentally misreads the relationship between corporations and the state, creating a distinction between the two that doesn’t really exist outside of an intro-to-economics textbook. The state draws up the charter that gives corporations life, granting them the same rights as people -- more rights, in fact, as a corporate person can do what would land an actual person in prison with impunity or close to it, as when Big Banana was caught paying labor organizer-killing, right-wing death squads in Colombia and got off with a fine.

Corporations are more properly understood not as victims of the state, but its for-profit accomplices. Indeed, Amazon was eager to help the U.S. government’s campaign against a website that -- thanks almost entirely to Chelsea Manning -- had exposed many embarrassing acts of U.S. criminality across the globe: the condoning of torture by U.S. allies in Iraq; the sexual abuse of young boys by U.S. contractors in Afghanistan; the cover-up of U.S. airstrikes in Yemen, including one that killed 41 civilians, 21 of them children. The decision to boot WikiLeaks was, in fact, one that was made internally, no pressure from the deep state required.

“I consulted people I knew fairly high up in the State Department off the record, and they said that they did not have to put pressure ... on Amazon for that to happen,” said Robert McChesney, a professor of communication at the University of Illinois, in an appearance on "Democracy Now!." “It was not a difficult sell.”

And it paid off. A little more than a year later, Amazon was awarded a generous $600 million contract from the CIA to build a cloud computing service that will reportedly “provide all 17 [U.S.] intelligence agencies unprecedented access to an untold number of computers for various on-demand computing, analytic, storage, collaboration and other services.” As The Atlanticnoted, and as former NSA contractor Edward Snowden revealed, these same agencies collect “billions and perhaps trillions of pieces of metadata, phone and Internet records, and other various bits of information on an annual basis.”

That is to say: On Amazon’s servers will be information on millions of people that the intelligence community has no right to possess -- Director of National Intelligence James Clapper initially denied the intelligence community was collecting such data for a reason -- which is used to facilitate corporate espionage and drone strikes that don’t just jeopardize innocent lives, but have demonstrably ended hundreds of them.

Instead of helping expose U.S. war crimes, then, Amazon’s cloud service could be used to facilitate them, for which it will be paid handsomely -- which was, in all likelihood, the whole point of the company proving itself a good corporate citizen by disassociating itself from an organization that sought to expose its future clients in the intelligence community.

"We look forward to a successful relationship with the CIA,” Amazon said in a 2013 statement after winning that long-sought contract (following a protracted battle for it with a similarly eager tech giant, IBM).

If it were more honest, Amazon might have said "We look forward to a successful relationship with the [coup d’état-promoting, drone-striking, blood-stained] CIA.”

And if it were more honest, Amazon could have said the same thing in 2010.

So long as there are giant piles of money to be made by systematically violating the privacy of the public (the CIA and NSA together enjoy a budget of over $25 billion), corporations will gladly lie in the same bed as those who created them, which is, yes, gross. Protecting consumer privacy is at best an advertising slogan, not a motivating principle for entities whose sole responsibility to shareholders is to maximize quarterly profits. This isn’t an admission of defeat -- and when companies fear state-sanctioned invasions of privacy will cost them customers in the private sector or contracts with foreign states, they do sometimes roll back their participation -- but a call to recognize the true villain: If we desire more than just an iPhone with encryption, we must acknowledge the issue is not just a few individual megalomaniacs we call senators, but a system called capitalism that systemically encourages this behavior.

In the 1970s, following the resignation of President Richard Nixon, the Church Committee exposed rampant spying on dissidents that was illegal even according to the loose legal standards of the time. Speeches were made, reforms were demanded and new laws were passed. The abuses, it was claimed, were relegated to history. What happened next? Look around: The total surveillance we enjoy today, enabled by high-tech military contractors including AT&T and Googleand Verizon and every other nominally private tech company that capitalism encourages to value profits over privacy -- a public-private partnership that grants those in power a means of spying on the powerless beyond the wildest dreams of any 20th century totalitarian. Sure, ostensibly communist states can of course be quite awful too, but the difference is that, in capitalist nations, the citizens actually place the eavesdropping devices in their own homes.

Now, whether the reforms of the 1970s were inadequate or were just plain ignored by those who were to be reformed is sort of beside the point; the status quo is what it is and, at least if one values privacy and the ability to organize and engage in political discussion and search the Internet without fear a spy agency or one of its contractors is monitoring it all in real-time, it sure isn’t good. So when groups such as the Electronic Frontier Foundation and progressive magazines such as The Nation call for “another Church Committee,” the question we ought to ask them is: “Fucking really?”

Abolishing capitalism is indeed a utopian goal, but when corporations routinely go above and beyond their legal duties to serve the state -- granting police and intelligence agencies access to their customers’ data without so much as a judge’s rubberstamp on a warrant -- expecting meaningful change from a few hearings or legislative reforms will only leave the reformers disappointed to find their efforts have just led to dystopia. So long as there’s money to be made serving the corporate state, that is what corporations will do; there’s no need to resort to conspiracy for it’s right there in their corporate. And that’s not to be defeatist, but to suggest we ought to try a different approach: we ought to be organizing to put a stop to public-private partnerships altogether.

Right-wing libertarians and other defenders of capitalism are absolutely right when they say that the profit motive is a mighty motive indeed -- and that’s precisely why we should seek to remove it; to take away even just the prospect of a federal contract. If the demands of privacy advocates are limited by myopic concerns of what’s politically possible here and now, all they will have to show for their advocacy will be a false sense of achievement. The problem isn’t, as some imagine it, a state spying without appropriate limits, but the fact that capitalism erases the distinction between public and private, making it so non-state actors gleefully act as the state’s eyes and ears. This isn’t about just Google or the government, but both: the capitalist state. And until we start recognizing that and saying as much, the result of our efforts will be more of the same.