House leaders want to fund the government while letting the right "vent." Here's the fundamental problem with that 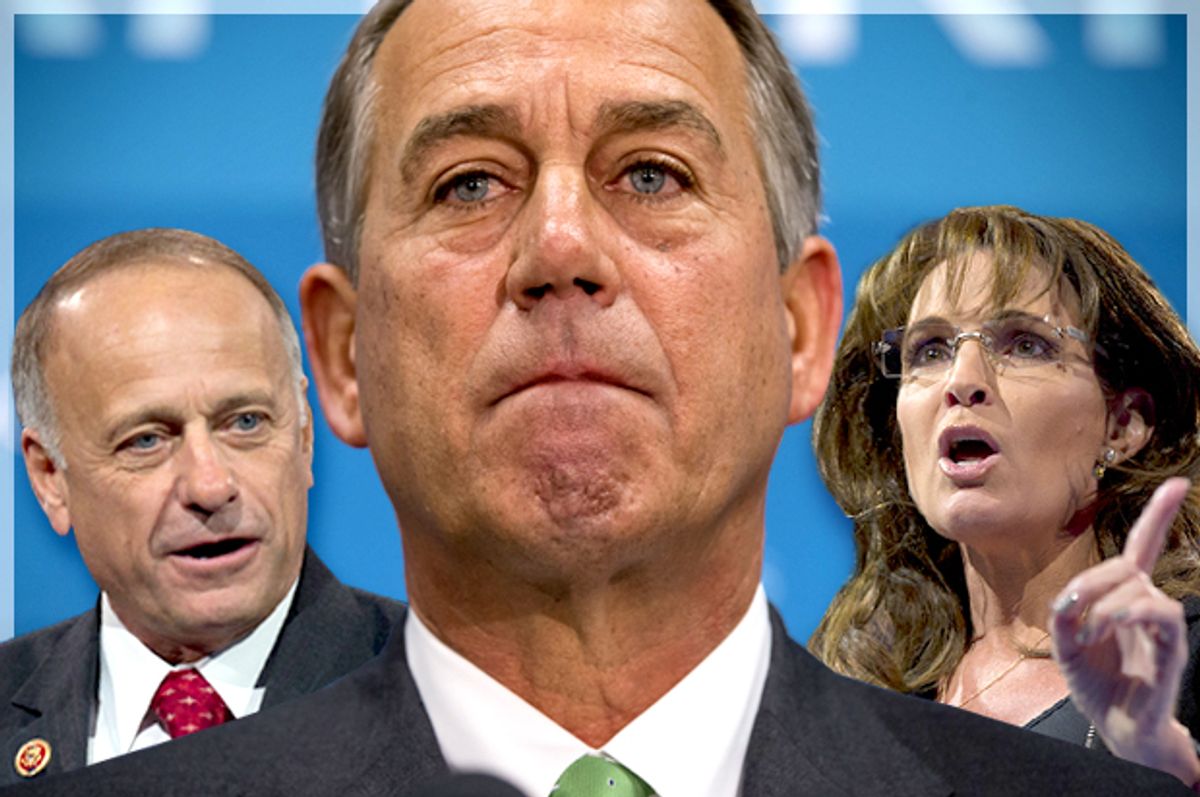 Congress returns to work today after a long Thanksgiving weekend. They're just like you! And after another week or so of work, they'll go back on vacation for the remainder of the month. They're not just like you!

In this final session of the 113th Congress, House and Senate leaders will consider only the most vital pieces of legislation, like funding the government and extending a bunch of tax breaks for corporations. We can be fairly certain that the corporations will get their tax breaks in one form or another eventually. This is America, goddamnit. But funding the government? This is a whole other thing.

The House Republican leadership has coalesced around a strategy that allows them to keep the government fully funded in the near term. It's an archaic parliamentary maneuver called "kicking the problem into the next Congress and then doing ??? in the next Congress." The leadership will appease the appropriators (and themselves) by passing most of the omnibus appropriations package funding the government through the end of the fiscal year -- while leaving out appropriations for those agencies tasked with enforcing immigration laws. Funding for those agencies will be brought up in a short-term continuing resolution lasting only a few months. At that point, after several more months' "thinking time," Republican leaders will once again find themselves staring at another government shutdown, if only a partial one. (Since they'd be shutting down immigration enforcement agencies, ironically, this would provide for an excellent opportunity to sneak across the border.)

Politico reports today on this latest test for the House Republican leadership as it tries to appease the most conservative element of its conference. The idea, according to Politico's reading of the leaders, is to find a way to allow the far-right flank to "vent" without unnecessarily and arbitrarily damaging the country and the Republican brand:

But inside Republican leadership, senior aides and lawmakers freely admit that the executive order — no matter how unpopular it is — will likely stand and there’s little Congress can do about it. So Boehner, McCarthy and Scalise need to craft a process that will allow conservatives to vent, but prevent a shutdown.

This doesn't quite get to the root of the leadership's problem. If Boehner, McCarthy and Scalise could properly sate conservatives by giving them an opportunity to "vent," their lives would be a whole lot easier.

"Venting" implies an opportunity to register a protest vote, or some other act of materialized rage -- basically a messaging stunt, coughed out and recorded, clearing the space for the actual work of marginally competent governance to resume. If conservatives were to accept venting as an appropriate recourse to the Obama presidency, our government would function exponentially better than it has in the past few years. Appropriations chair Hal Rogers' rescission strategy, which would fully fund the government through next September but grant Republicans an effective protest vote afterward, could be moved. House Republicans would have accepted the original Boehner/Cantor strategy in September 2013 to pass a government funding measure defunding Obamacare, even though it would have allowed Harry Reid to strike it out in the Senate. There would be a venting, in the form of a protest vote, but the government would never come in any danger of shutting down.

The conservatives who give the leadership headaches don't want to "vent," though. That's the problem: they want to eliminate the policies they don't like -- Obamacare, the immigration executive action -- even though that's not mathematically possible given the current occupant of the White House and the lack of two-thirds Republican majorities in both houses of Congress.

They don't like being told about this impossible math, because they are stubborn blowhards. So when the leadership devises a strategy that maintains the status quo but gives them an opportunity to "vent," they think the leadership is selling them out; they rebel, and shutdown politics come into play. Rep. Steve King, perhaps the most prominent anti-immigration hawk in the House, will not be persuaded into shutting up by any strategy that doesn't end the Obama Executive Tyrannical Amnesty. As in: there's no strategy that will shut up Rep. Steve King. There are others like him, and Speaker Ted Cruz is constantly egging them on. This causes problems.

Then again, there may be a third option that could pull off the trick: the Super Vent. This would be a form of registering protest so dramatically childish that (enough) conservatives may actually go for it. We're talking about John Boehner canceling the State of the Union. Boehner's aide tells Politico that it won't happen, which is a real shame. It could be the silver bullet to this whole mess. If he could trade it to conservatives in exchange for taking a shutdown off the table? And basic functioning of the government wouldn't be interrupted? And -- on top of everything else! -- it would be fucking funny? Perfect.