Bravo's first scripted series knocks it out of the park: “Girlfriends’ Guide to Divorce” is like a more grounded "Sex and the City" 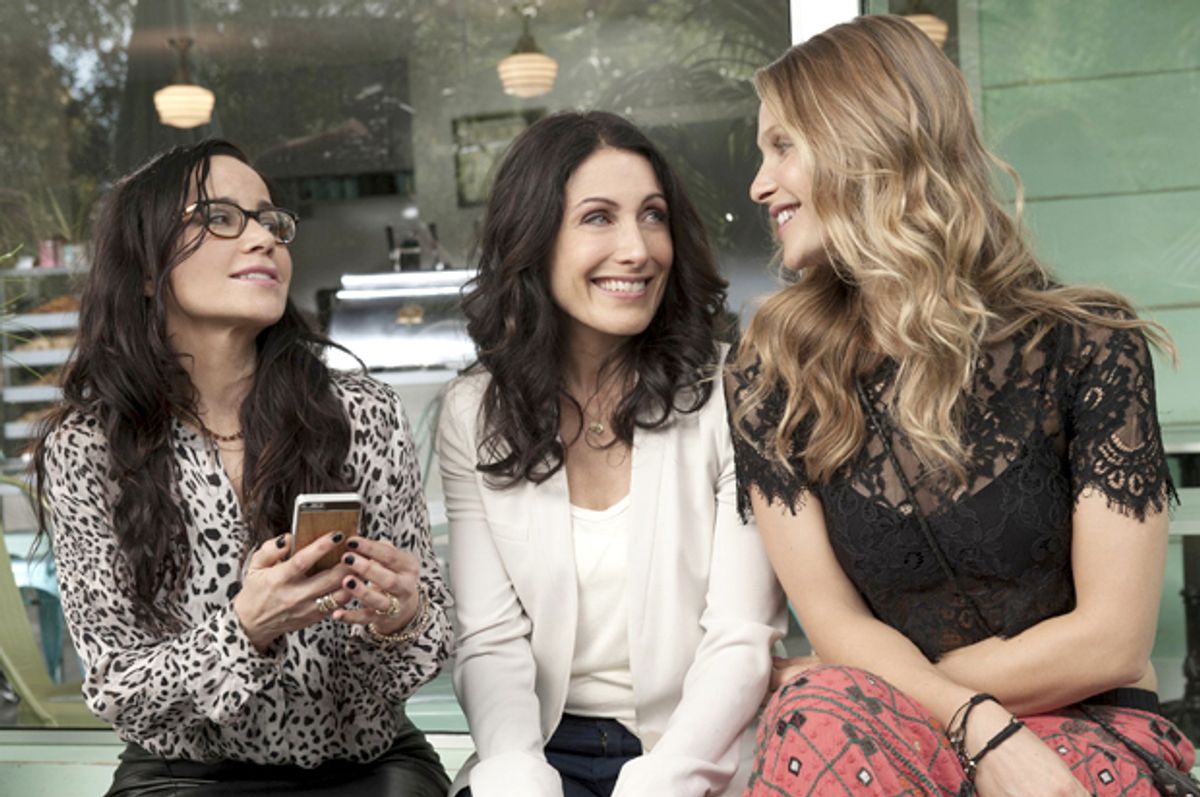 As hackneyed as the formula can be, there’s something instantly engaging about a story starring a group of girlfriends. When done well, it’s a treat: a story where women are real people, and their relationships with men are not all that defines them. Friendship may get sung about less than romance, but it’s an equally rare, equally transformative experience, and one without the established arc of courtship, marriage, children and either death or divorce. I wrote a few weeks ago about how the relationship between girlfriends is the stabilizing force in Comedy Central’s “Broad City,” and that’s true of dramas like “True Detective,” about the intense, fraught partnership between two friends, and “Mad Men,” which has increasingly depended on the dynamic between Don and Peggy for its pathos.

“Girlfriends’ Guide To Divorce” is a light, fun show, designed to fit well alongside Bravo’s smash reality hits, the “Real Housewives” franchise. It’s hard to avoid comparing it to HBO’s landmark “Sex and the City,” because both shows are so unabashedly focused on the frothy joys of being wealthy, successful, and female, while enthusiastically prying open the awkwardness of romantic misadventure as an adult woman. But as the many banal copycats of the “Sex and the City” franchise have failed to learn — and indeed, the later iterations of the franchise, compared to the former — the power of the HBO show wasn’t that it was about either sex or the city, but rather about being female in the world.

“Girlfriends’ Guide to Divorce” fast-forwards through what is, presumably, a decade or so of happily married life to its messy, inevitable denouement: divorce. In the last years of “Sex and the City,” each main character was finding a man to settle down with. In the first episode of “Girlfriends’ Guide to Divorce,” each woman has jettisoned the man and the marriage in favor of joint custody and nights out with the girls. The “Real Housewives” franchise is far more splashy and mean-spirited than “Girlfriends’ Guide to Divorce,” but the demographic of its characters is basically identical. “Sex and the City” reclaimed being single in your 30s; Bravo is now reclaiming being single in your 50s (provided you create as much drama as possible).

Dozens of shows have tried to be a “Sex and the City” substitute or knockoff — from mediocre curiosities like “Desperate Housewives” to abject failures like “Emily’s Reasons Why Not.” And given that the “Real Housewives” franchise is not without its flaws, but for a few choice subtleties in its execution, “Girlfriends’ Guide to Divorce” could have easily gone the route of banal schlock. Thankfully, it doesn’t. The Bravo show has lots of sex and lots of the city — not New York, but L.A. — but at its heart, it’s about a few women supporting each other, in ways that are both tragic and hilarious.

The show’s protagonist is Abby McCarthy, played by Lisa Edelstein, in a role that seems to come as naturally to her as waking up. In “House,” her most well-known role opposite Hugh Laurie, her character was usually portrayed as tough and emotionally restrained. In “Girlfriends’ Guide to Divorce,” she’s offered a lot more expressive range, and she takes to it with enthusiasm, offering everything from a girlish ducking of her head while flirting, dilated-pupils arousal during sex, and a naked, wild anger directed toward her husband. In the past, Edelstein has been cast as a sidelined love interest and a high-class hooker, but as Abby McCarthy she’s the most comfortable I’ve seen her: a woman with experience and character.

The show does hew close to its inspirations: As was Carrie Bradshaw before her, Abby’s a writer — and like Carrie, she mines her personal life for material. Carrie had a column about sex. Abby writes books about motherhood and marriage, in what has become its own mini-franchise: “The Girlfriends’ Guides to [Insert Something Feminine Here].” Like Carrie, Abby’s affections are split between a few different men, including one who is married and emotionally unavailable. And like Carrie, one of Abby’s best friends is a ball-busting lawyer — Janeane Garofalo’s Lyla, who is more comfortable with sabotage than intimacy.

But, perhaps due to the legacy of showrunner Marti Noxon — who is best known for her work on “Buffy the Vampire Slayer” — the characters never seem to fall into caricature, which is so often the pitfall of “groups of friends” shows. Lyla and Beau Garrett’s Phoebe are different, but not types, and their pattr is easy and intimate as they tackle bougie baby showers and elementary school drop-off politics. The friendships feel lived-in and tangible, and unlike a lot of other television characters, Abby, Lyla and Phoebe are good friends to each other — supportive, interested, and loyal — which makes it easy to root for them. Lyla and Phoebe break the news of Abby’s husband's new girlfriend — who is not just young and cute but a CW actress — by holding her hands and fanning her, letting her rock back and forth so she can cry, before reading over her text messages to him and approving of her word choice.

What ultimately makes “Girlfriends’ Guide to Divorce” so enjoyable is that intimacy — between the girlfriends, yes, but also between the characters and their own experiences, and between the characters and the audience. Unlike the consumerist, freewheeling, implausible approach to money and careers in “Sex and the City,” “Girlfriends’ Guide to Divorce” pays attention to the complications of finances in divorces, the relationship each character has with her children, and the day-to-day grind of holding onto a job and/or making alimony payments. (Two of our protagonists are the breadwinners for their families, which naturally complicates the divorce proceedings; brash, irrepressible Lyla is so frustrated by her husband’s expenditures that she makes an appointment with his dominatrix to confront her about financials.) This is a show unafraid of getting very messy; the pilot’s main sex scene is one punctuated with awkward pauses, saying the wrong person’s name, and nervous laughter. It is almost too real in its vulnerability.

The charming dysfunction of the characters draws the audience in; it’s an inviting kind of misadventure, one that is so free with sharing details about its life that it feels like another old friend, sitting down and telling a story over lunch. “Sex and the City” was notable for being willing to articulate details of sexual intimacy that very few other shows would, at the time. “Girlfriends’ Guide to Divorce” is getting into the many shades of gray of what Gwyneth Paltrow called “conscious uncoupling” with similar zeal. And like so many other genre-bending shows this year, it does so with grace, humor and pathos, making for a gem on a channel that is otherwise populated by “Real” housewives.