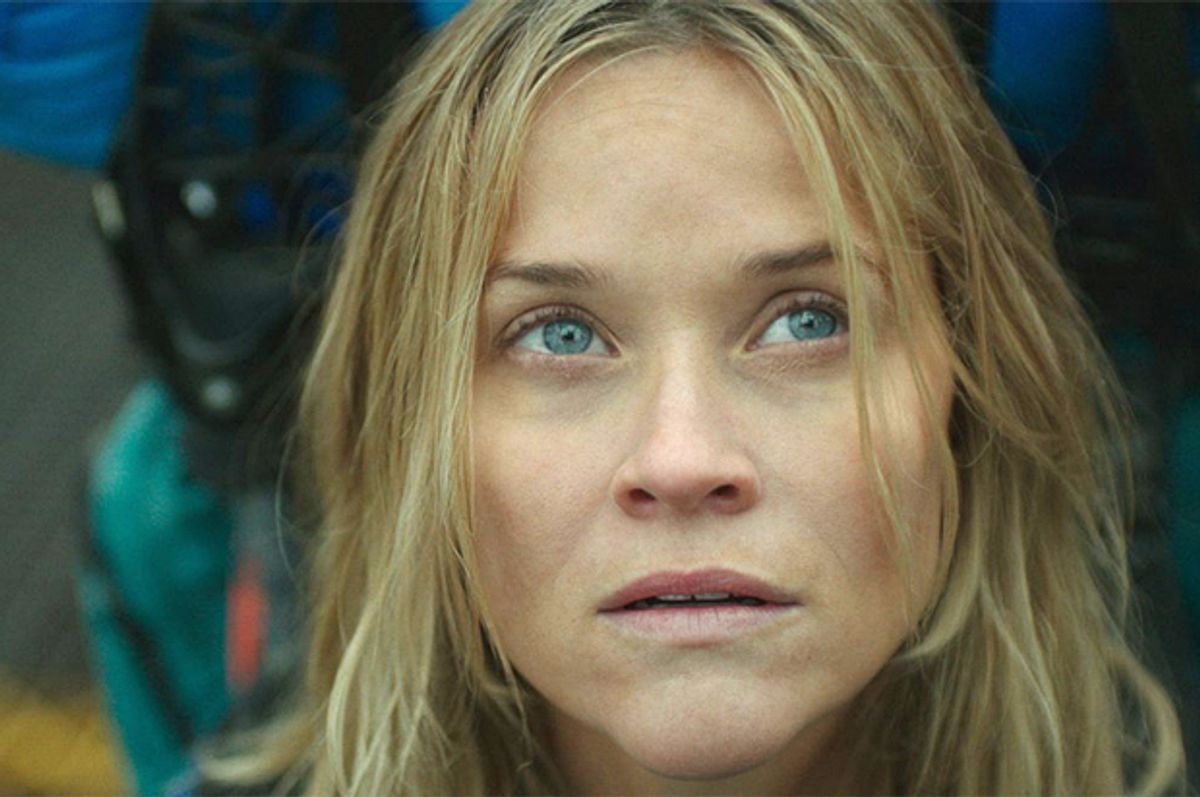 It seems to be Feminism Week in the fall movie season, and given our intense social focus on the nature and limits of female empowerment and women’s sexual agency at the moment, the timing is just about right. This week features a documentary about the founding of the modern women’s movement (“She’s Beautiful When She’s Angry”), a comic drama about female soldiers in the Israeli military (“Zero Motivation”) and an adaptation of Strindberg’s proto-feminist and/or anti-feminist classic “Miss Julie,” written and directed by Liv Ullmann and starring Jessica Chastain. But the star attraction and Oscar-season prospect, I suppose, is “Wild,” which features Reese Witherspoon as Cheryl Strayed, the real-life memoirist who turned her search for self on the Pacific Crest Trail into a best-selling book and something like a cultural moment.

“Wild” is a moving, engaging and deeply sincere story, set against some of the most magnificent scenery on the planet, and most of Strayed’s fans should be reasonably content. If you detect a note of caution there, you’re right. I really have nothing bad to say about Canadian director Jean-Marc Vallée’s clean and straightforward filmmaking or Nick Hornby’s script (which capably renders a subjective, first-person account into a dramatic arc), and Witherspoon gives us a transparent and compelling performance, on screen alone for most of the picture, with very little sense of star vanity. But “Wild” the movie has a curiously unsticky and unmemorable quality, as if it had melted along the journey, a Sierra Nevada snowball in the Mojave Desert. It has the same nearly invisible flaws as “Dallas Buyers Club,” Vallée’s last agreeable pop-anthropology fable of fall and redemption, but writ larger: It’s just that little bit prepackaged, it stands off from us a little too far. It wants us to feel, but not to feel anything dangerous.

I feel roughly the same about Cheryl Strayed as I do about “Eat Pray Love” author Elizabeth Gilbert (a former magazine colleague of mine), which has to begin with the observation that I will never understand, on a personal or intimate level, what it’s like to be a woman who feels imprisoned in her own life in a female-specific trap. On a broader level, there’s nothing wrong with the personal search for transcendence and reinvention; it’s one of humanity’s more admirable tendencies. There’s certainly nothing wrong with writing about one’s own quest, and there’s absolutely nothing wrong with writing an account that connects with millions of other people and gets you paid. But the problem with all self-help or inspirational literature, beginning with the doctrines handed down to Moses on the mountain (and probably quite a bit before that) is always the same: People want to take it literally, and we have a tendency to mistake the map for the journey.

I doubt that the park rangers along the PCT much appreciate Strayed’s book, or this movie. First of all, they’re depicted as leering, sexist boors who are alternately amazed and aroused by the prospect of a solitary female backpacker. Then there’s the possibility that as the “Wild” phenomenon spreads further into mass culture the 2,650-mile trail from Mexico to Canada will be flooded with ill-prepared spiritual seekers. To be clear, on the first count I have no sympathy. I’m not questioning Strayed’s account of what she observed and experienced, and I’m sure that backpacker culture circa 1995 was full of macho creeps. One of the real strengths of “Wild” is the way Vallée and Witherspoon capture the tremendous vulnerability of a woman alone in the wilderness, and the immense fortitude that was necessary for Strayed to complete her trek.

Every encounter Cheryl has on the trail is loaded with tension and possible menace. A scraggly-looking rancher in the desert seems to be propositioning her; it turns out he means to take her home to the trailer park for a home-cooked meal with his wife. But a bow-hunter she meets in the mountains – and whom she rescues from a dangerous situation, ironically enough – has a different end in view. Only the presence of his hunting companion, who is slightly more committed to social norms, saves Strayed from a likely sexual assault at that moment. In that one brief scene “Wild” conveys a truth of female existence that men hardly ever notice: There are times in every woman’s life where her safety depends on the goodwill, or just on the whims, of men. That can only be exhausting and depressing.

Because our public discourse is dominated by morons, and by preformed, lard-like slabs of ideology masquerading as thought, someone out there right now is writing an article inspired by this movie saying that women should be more sensible than to go hiking alone if they want to avoid sexual assault. First of all, of course Strayed didn’t want to get raped, and of course women should have the right to walk where they please, when they please. More to the point, they do have that right, and must take it, even when that involves the possibility of bad things happening. Strayed’s memoir expresses a fundamental truth, and Vallée’s film at least gestures toward it: You cannot reinvent yourself without taking risks, and furthermore that nothing expresses the debased moral code of our time – which spread relatively evenly across the “left” and the “right” – better than the superabundance of caution, the pathological desire to swaddle oneself and one’s loved ones from all possible dangers.

When we watch Witherspoon as Strayed on her own, or nearly so, against the spectacular desert, forest and mountain landscapes of California – she walked the entire Golden State portion of the PCT and into Oregon, about 1,100 miles in all – “Wild” is never less than captivating. It’s like a physical, philosophical and moral odyssey jointly crafted by Nietzsche and John Muir, with a light dusting of second-wave feminism and just enough humor to lift the dough. (The cinematography is by Yves Bélanger, Vallée’s customary collaborator, and as much as I like to complain about the Arri Alexa, the digital camera that has conquered the film industry, the results look great in this case.) When we get to the reasons why Strayed decided to go for a big long walk in the first place, the movie becomes more problematic, not to say formulaic.

Hornby’s script chops up the back story into digestible flashback fragments, which feature a lovely performance from Laura Dern as Cheryl’s long-suffering but relentlessly optimistic mother. But the overall effect feels a little canned: Cheryl was unable to grieve her mother properly, she retreated into booze and drugs and compulsive promiscuity, and the way to escape that cycle was to walk more than a thousand miles by herself, amid rattlesnakes and would-be rapists and temperature extremes. Whether Strayed knew this consciously or not, her story tapped into a deep cultural vein: The “I Walked Somewhere and Found Myself” narrative goes back at least as far as medieval pilgrimages like the Camino de Compostela, and has roots in the ancient world. In fairness, Hornby includes some of the more reflective and anti-moralistic insights from Strayed’s book, including the idea that all these things were part of the same process: At one point she needed cocaine and sex with random guys, and at another point she needed solitude in the wilderness. But in the end “Wild” is a Hollywood holiday movie “based on a true story,” meaning that its view of reality is conditioned by the three-act structure and the pop-Christian teleology of sin and repentance.

Of course I looked at the gorgeous images in “Wild” and told myself I’d love to hike the Pacific Crest Trail; anybody would. Hell, if the vicarious experience of this movie motivates a few people to go outside, it’s a positive social good. But if I feel driven to seek out specific places on a specific trail in imitation of someone else’s authentic experience, then I’m just following a script, and missing the point of her story. Cheryl Strayed is someone who threw the script away and tried to write her own, which is a marvelous example for women or men of all kinds. As her story of liberation gets iterated and reiterated and streamlined and metamorphosed into an inspiring movie produced by and starring a famous actress who has the best possible intentions, it suffers the same fate as the stories of Jesus and the Buddha and so many other seekers. It stops being a story of self-defining human freedom, and becomes instruction.