Black poverty is state violence, too: Why struggles for criminal justice and living wage are uniting 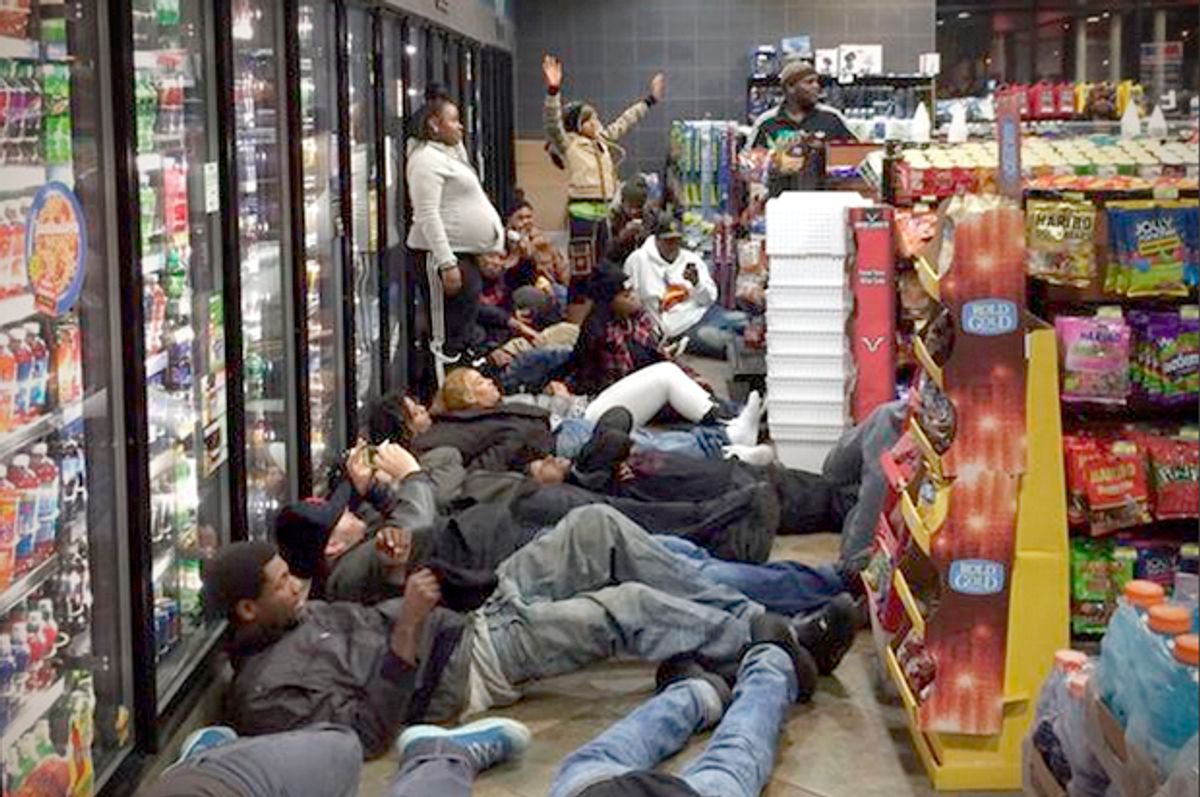 “Today felt different because we were doing it for the Mike Brown situation and trying to show people the significance between injustice in our workplaces and injustice in our communities,” says St. Louis Burger King worker Carlos Robinson, who has been organizing for $15 an hour and a union for about seven months. “It's a bigger difference when you're doing it for more than one reason but for the same cause.”

Convenience store workers, airport workers, and home care workers joined the actions calling for $15 an hour and a union, broadening the movement still more, but what really gave Thursday its kick was the connection to the emotions (and tactics) of Ferguson activists and their nationwide supporters.

Robinson and his fellow workers staged a “die-in” as part of their day of actions, in a North St. Louis convenience store, their bodies stretched between metal racks of chips and candy, clogging the space in an echo both of historic sit-down strikes (that Walmart workers also evoked two weeks back) and a reminder of the way Brown's body lay in the street for four and a half hours after he was shot. “That was an image of what injustice has been done in our community to a young teenager,” Robinson says. “It could have been any young child that that happened to.”

Around the country, fast food strikers held moments of silence, hands raised, for Brown, Eric Garner, and others killed by the police. They added “Hands up, don't shoot” to their chants as police flocked to protect fast food stores from the protests. In New York, where the fast food strikes began two years ago and where on Wednesday we learned that a grand jury had also failed to indict the police officer who killed Eric Garner, daytime marches and actions led into an evening rally at Foley Square, from which thousands of people departed in different directions, variously shutting down bridges, highways, and with the aid of an overzealous police blockade, the Holland Tunnel.

The phrase “Black Lives Matter” has become central to the movement, part of a project begun by organizers Alicia Garza, Patrisse Cullors and Opal Tometti after the killing of Trayvon Martin. As Garza, an organizer with the National Domestic Workers Alliance, points out, it is an encompassing slogan, one that challenges many kinds of injustice. “When we say Black Lives Matter, we are talking about the ways in which Black people are deprived of our basic human rights and dignity,” she writes. “It is an acknowledgement Black poverty and genocide is state violence.”

Labor struggles have a long, checkered history with struggles for racial justice and particularly against violence. In his book Hammer and Hoe, historian Robin D.G. Kelley tells the story of the struggles of the Depression-era Alabama Communist Party—at the time one of the few left-wing organizations committed to organizing black workers—to build worker organizations. Their efforts to challenge the economic oppression of black people were too often met with lynching and state violence. Black workers' unions were central to the Civil Rights movement, from the Pullman porters to the Memphis sanitation workers Martin Luther King, Jr. was supporting when he was shot. Their struggle—remember the “I Am a Man” signs carried by the workers in Memphis—was always about more than just wages. It was and is about being seen as humans worthy of respect, respect they would demand if it was not freely given.

The Ferguson protests targeted Walmart and other retail outlets over Black Friday weekend, making explicit the connection between the “business” part of “business as usual” and the devaluing of black lives. The workers of the Fight for $15, in turn, included tributes to Brown and Garner in their actions and got support in return. Robinson says, “The reason everybody came out is because they know just as well as we do that there's injustice in our communities and there's injustice in our fast food places and we need to do something about it. They're willing to show us support because they know that one day they had to take a stand for what they believed in, and now they see we're doing it and they believe in us.”

Solidarity. It's a basic labor movement concept, one embedded in the movement's oft-forgotten history.

Douglas Williams, at Hack the Union, challenged today's labor movement to show up in a more direct fashion for black workers and their struggles as black people. Police unions, it is true, have been unwavering in their support for police officers accused of crimes. Words of support for struggles against racist violence—even good words—are not enough from labor leaders, not when their members and would-be members have already taken the lead.

American Federation of Teachers president Randi Weingarten seems to have heeded Williams's words, getting arrested as part of Thursday night's protests alongside her partner, Rabbi Sharon Kleinbaum, and a group from Jews for Racial and Economic Justice.

As the protests continue and grow and incorporate more issues, there will be more opportunities to demonstrate solidarity. For Carlos Robinson, there is no choice but continued struggle for fair wages and justice. Until that happens, he said, echoing another call that has been heard a lot in recent weeks, “Shut 'em down!”