Bill O’Reilly teaches me about torture! Our spat reaches new level of surrealism

Guys, my torture views are “dumb,” Fox News genius says -- but he knows about war because he wrote “Killing Patton” 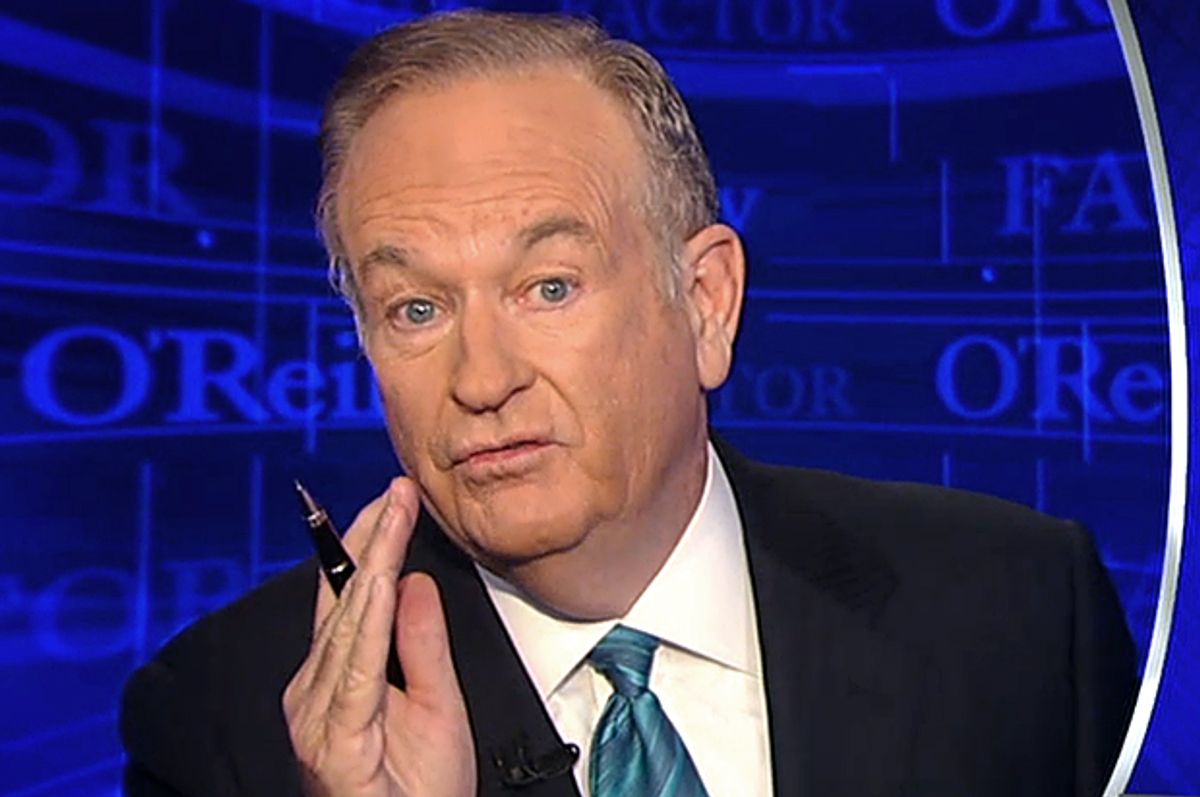 I can’t believe I wrote a whole piece about the dangerous authoritarian strain in American political culture without mentioning Fox’s Bill O’Reilly. O’Reilly must have been a little hurt at being left out, because he included me in his Talking Points rant that defended torture Wednesday night. It’s a strange feeling when you’re out having fun, and suddenly you’re getting semi-literate email from strangers and seeing equally poorly reasoned insults on Twitter.

O’Reilly likes torture. He thinks it works. He claims it saved “thousands of lives.” And he’s concerned that Americans may be “confused” by the Senate Intelligence Committee’s report. And he’s irritated by that confusion.

Yeah, he really said that.

Then, with no introduction or even mention of my name, he features me replying to "Hardball’s" Chris Matthews, who had observed that ISIS and al-Qaida don’t obey the Geneva Conventions. I noted that our years of torture hadn’t stopped the rise of ISIS, either.

O’Reilly was so not convinced.

“That is one of the dumbest statements I have ever heard.”

“Everyone knows that aggressive tactics have decimated [al-Qaida]. Every sane person knows that.”

Obviously, I’m not sane. O’Reilly closed his segment by asking who Americans would rather have protecting them: “Bush and Cheney – or Ms. Walsh and her cohorts?”

There’s your choice, America. I’m happy to protect you, just get back to me when you’ve decided between me and those other guys.

Seriously, though, O’Reilly seems bored. He’s got to defend torture, it’s his job, but reading from the Teleprompter, in his droning prison warden voice, he didn’t seem to have his heart in it. I appreciate the fact that he thinks I need no introduction, but the whole thing seemed sloppy, and kind of lazy. Why not at least use Sen. Dianne Feinstein as the face of dumb female cluelessness about the manly art of torture? I mean, I’m a relative nobody on this issue.

Or better yet, why not use Sen. John McCain? Why not have an argument with someone whose views on the issue are deep and complicated and based in life experience? Someone who actually went to war, rather than just writing a book about it?

Because, of course, O’Reilly would lose that debate. Better to run a five-second clip of me, call what I said “dumb,” and reassure “confused,” “everyday” Americans that he’s vanquished their enemies – al-Qaida, and that lady from “Hardball.” What a con.