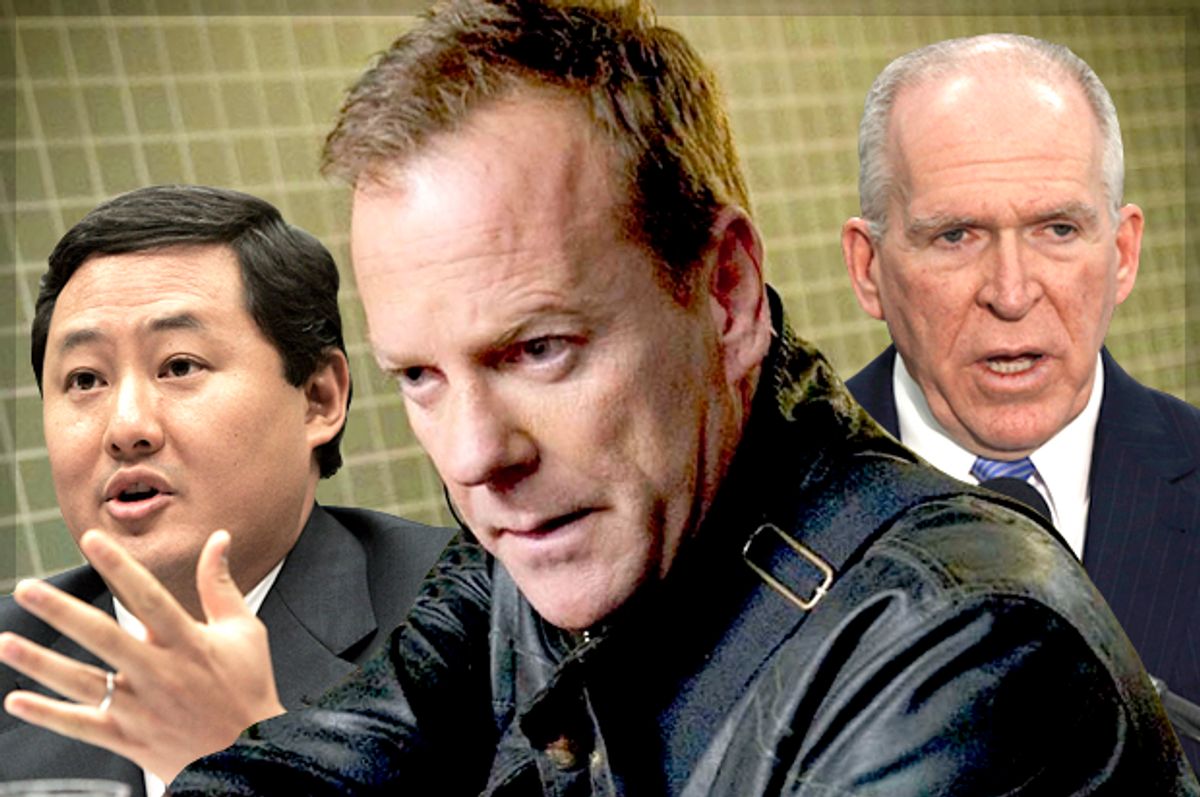 Despite the Obama administration’s multiple attempts to block it, on Tuesday the Senate Select Committee on Intelligence (SSCI) finally released a 500+ page, highly redacted executive summary of an investigation into the CIA’s programmatic torture, in CIA black sites, against men accused of terrorism. Even in its highly censored and narrow scope, the details of the report were damning.

As Mother Jones’ initial overview of the report highlighted: These detainees were tortured before the CIA ever determined whether they might cooperate. A significant percentage of the torture victims were wrongly held. Some detainees were told their children would be harmed, their mothers would be raped. One “mentally challenged” man was held so that the CIA could get leverage over his family. Many were suffocated by water, aka waterboarded, to the point of unconsciousness. “Rectal feeding” and "rectal rehydration" were common practices. One detainee was tortured because he refused to call his interrogator “sir.” Others were forced to stand for hours at a time on broken ankles.

As well, the CIA couldn’t keep track of detainees. Agents admitted to sexually assaulting detainees. Abu Zubaydah, the CIA’s first detainee, was waterboarded to the point of unconsciousness; had he died under torture, he was to be cremated by the CIA. He ended up on life support. He is still in Guantanamo. Khalid Sheikh Mohammed (KSM), the alleged mastermind of the 9/11 attacks, was going to be kept in confinement for the rest of his life. There is no discussion of the treatment of Dr. Aafiya Siddiqui, whose bizarre treatment at the hands of the U.S. military was briefly publicized in 2009. Siddiqui, a neuroscientist, was named by KSM as an operative shortly after he was detained and his “interrogations” began.

The widespread practice of torture, or “Enhanced Interrogation Techniques,” as news media often obsequiously described it, was initiated under the Bush administration and continued well into Obama’s administration, despite his seemingly earnest ban on torture issued early on.

Sadly, this isn’t the first report on CIA torture practices; they go back at least a decade to the CIA inspector general’s and Major General Taguba’s 2004 reports on Abu Ghraib, among others. In fact, the world has heard about CIA torture for years: from the horrific photographs of torture at Abu Ghraib, to reports of torture at secret CIA sites, to accounts by released Guantanamo detainees such as David Hicks and Moazzem Begg, to Ex-CIA agent John Kiriakou, to news articles about force-feeding, there has never been a moment when the media, the U.S. administration and many around the world were unaware of torture. That is, if they cared to know.

According to many of its defenders, the logic of the systematic torture program was that it helped protect American lives. At least this is the argument put forward in a letter signed by ex-CIA directors George Tenet, Porter Goss and Michael Hayden. How torture has helped us has never been clear because — surprise! -- all of that evidence is classified. And clearly, assertions that can’t be discussed can’t be refuted. But they should be treated with skepticism, especially when they come from an agency with a well-established history of dishonesty.

There are others who bring in fresh doses of reality. Salon contributor Marcy Wheeler argues that the Bush administration’s project in promoting torture was not the gleaning of intelligence that saves American lives, but even more dubious purposes that we are not discussing in the “debate” over torture: 1) the “exploitation” of detainee information that would justify the invasion of Iraq by creating a link to al-Qaeda. (As she points out, the Senate has known this for years.); 2) the production of propaganda; and 3) the inducement to create double agents. Read her posts for methodical, airtight context and evidence surrounding the decade-old discussion of torture.

There’s another aspect of the torture debate that we’re not talking about, perhaps so obvious as to be invisible. This was not a generic torture program for just anyone who threatened the national security of Americans; this was a torture program aimed exclusively against Muslim men who were suspected — but not proven — to be threats to Americans. Remember that many of these men were caught up in a bounty-led dragnet. They were caught and turned over to the U.S. military for cash, even though it was understood early in the War on Terror that many of them were being held wrongly. Many of them have been cleared for release for over a decade, but are still being held in Guantanamo under inhumane conditions. Some were children. Some were women. They were all Muslim, and linked — either by assumption or coercion, or as Wheeler points out, through prevarication — to al-Qaeda. And they were tortured. So let’s not pretend that torture was color-blind.

Brian Williams asked former NSA Director Michael Hayden how he would have felt had a member of his own family been tortured. Hayden’s flippant response:

“My citizens.” Not people, not human beings, but Hayden’s — America’s -- citizens. Of course, Hayden’s response is telling: His concern is the lives of (some) Americans. And yet it is the opposite of the truth: None of the hundreds of thousands of Muslim men have yet to be proven to have killed 3,000 people on September 11, 2001 — at least not according to evidence that the American or global public will likely see or hear. The evidence that could convince many skeptics is classified, and rightly so, according to government secrecy’s biggest champion, Senator Dianne Feinstein. Feinstein, you will remember from Tuesday’s Senate hearing, was shocked — just shocked -- about torture. Yet she was not shocked enough to be interested in declassifying the SSCI report.

Using the death of 3,000 people as an excuse, the U.S. charged into Iraq and killed hundreds of Iraqis who had nothing to do with September 11. As journalist Murtaza Hussain points out, using the same excuse, U.S. soldiers detained, violated, maimed and inflicted other forms of unspeakable pain on many of the Iraqis and Afghanis who were detained. Whose interests are being served here? Those of ordinary Americans? Or those of the American elite, for whom violence and torture are but household chores meted out to U.S soldiers and other personal servants, for the purposes of propaganda, fear-mongering and re-election?

If torture really stems from a desire to protect the health and security of all Americans, then how is this alleged motive being applied elsewhere in American civic life? Recently, our attention has been focused on the killings, by the police, of young black men such as Michael Brown and Eric Garner. I would venture that the pattern of police officers who kill black Americans is also threatening the security of Americans.

When undocumented migrant parents, whose children are citizens, are deported — leaving them exposed and vulnerable to strangers -- isn’t the security of young (Latino) Americans also threatened?

And then there are bankers who were deeply implicated in creating and sustaining a multibillion-dollar financial scam to push sub-prime mortgages, practices luring in and ultimately causing millions of working-class and minority Americans to become homeless or penniless through fraudulent foreclosures. I would venture to suggest that U.S. financiers are also threats to the security of American lives.

Unsurprisingly, I’m not seeing police officers, or ICE officials, or mortgage finance company executives being tortured — or even fired -- in order to protect American security.

Torture isn’t the answer to protecting black, Latino and working-class lives, I’m sure many would say. That is also true of the facile arguments defending the CIA torture program in relation to “American lives.”

Critics might say that I’m formulating the wrong equation: Torture wouldn’t extract information about how to protect the security of black and Latino and working-class Americans. Yes, that is the Senate Report’s point: Torture doesn’t extract that information.

Others would say that the lack of security for black, Latino and working-class Americans has to do with how little their lives are valued. Good point: Why does the righteous nation that invokes human rights at every turn value certain lives over others, and certainly not those of Muslims captured by dubious means?

Yet others will point out that the vulnerability of minorities and the working class stems from other sources: violence, brutality, racism, financial exploitation. True. The vulnerability — and not the national security — of Americans increases when their own government engages in such practices. So what’s torture got to do with American security?

Three thousand deaths (of Americans and non-Americans) became the raison d’etre to starve, freeze, waterboard and maim with impunity countless Muslim men, not just in Guantanamo and Abu Ghraib and Bagram, but elsewhere in places that the U.S. has yet to confirm.

This was a torture program against Muslim men alleged but never demonstrated to be terrorists. Let’s be more precise and stop identifying the SSCI report as the “torture” report. That name highlights the technique, but not the targets of torture. It reinforces the idea that torture, not the humans who were subject to it, is the only important aspect of it. But in fact, it’s not just about torture anywhere, any time. It’s about two presidentially approved Torture Enacted Against Muslims programs: the shorthand should be the TEAM USA report.

Let’s not limit our calls for accountability to G. W. Bush, Dick Cheney, torture architect John Yoo and the rest of the Bush administration, along with ex-CIA director George Tenet. Neither the current CIA Director John Brennan nor the current administration of Hope and Change -- including departing Attorney General Eric Holder -- has any interest in discussing, accounting for, or reckoning with torture committed against hundreds of Muslims (that we know of — and how many others we don’t know about).