Bush's willful ignorance: Why he wanted to know as little about torture as possible 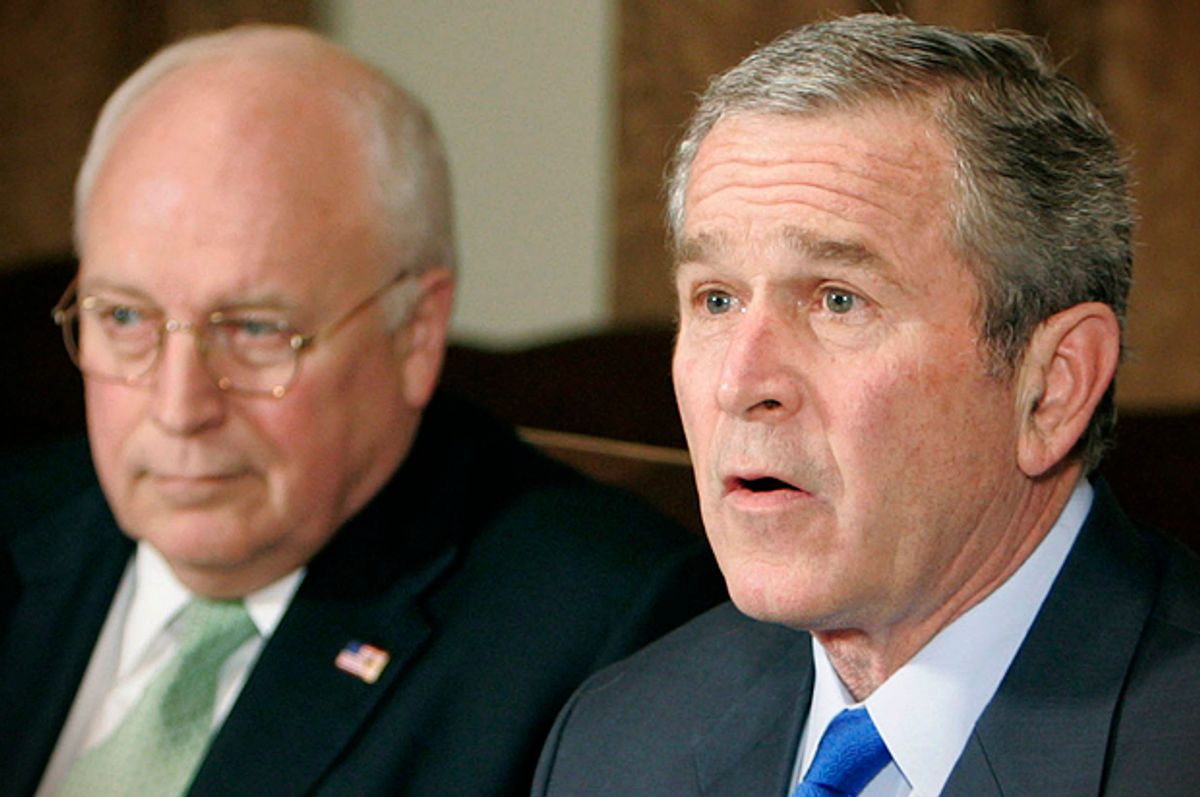 It’s happening more than 10 years too late (and in a better world it wouldn’t need to happen at all), but now that the Senate Intelligence Committee has released its so-called torture report, the American people are finally having an informed debate over their government’s use of “enhanced interrogation” during the presidency of George W. Bush. The process is not always pretty — at times, in fact, it is downright chilling. But now that we know some of the harrowing details of what was done in our name, it’ll be easier for us Americans to step a bit closer to the mirror and see what we’ve become. As Glenn Greenwald put it earlier this week, “Everybody’s noses got rubbed in [the torture program] by this report.”

Still, the human brain has an awesome capacity to reject information it finds upsetting — like proof that one’s leaders embraced practices refined by the Bolsheviks and the Gestapo. At least that’s my explanation for why some people would rather talk about alleged partisanship than “rectal rehydration.” Or why there’s been increasing focus on the question of whether the CIA “misled”  President Bush about the effectiveness of the program, as well as its essential nature. The whining from conservatives over the Committee not interviewing CIA agents is a red herring, of course (as Chris Hayes has noted, arguments about process are almost uniformly disingenuous). But I think the chatter about Bush the Younger really being Bush the Clueless gets to something deeper.

Before we get into that, though, let’s lay out the basic thrust of the Bush-as-patsy narrative. The key data point for the argument, which the report’s authors say is based on the CIA’s own records, is the fact that Bush wasn’t officially briefed on the agency’s use of waterboarding until 2006. By that point, CIA agents had been subjecting “more than three dozen prisoners” to a series of “near drownings” for years. The report also found that when the president was told of some of the program’s details — specifically, the practice of chaining alleged “evildoers” to the ceiling and forcing them to soil themselves — he “expressed discomfort.” He was, after all, the ultimate compassionate conservative.

Admittedly, there’s much in this formulation that’s seductive, confirming as it does a few widely held beliefs about Bush and his administration. For one thing, it jibes perfectly with the trope that depicts Bush as little more than a figurehead, the emptiest of suits. For another, because the torture program has been so vociferously defended by the former vice president, the story also seems to confirm the related suspicion that, for most of the Bush era, Dick Cheney was the real president. Last but not least, the idea that Bush was kept in the dark (not literally; that was reserved for detainees) lines up with another popular Bush motif: that he was, at least for a commander-in-chief, a “regular guy,” just like us, and not a sadistic authoritarian.

To paraphrase CIA Director John Brennan’s remarks this week, what Bush knew and when he knew it is “unknowable” to the rest of us. And to some extent, depending on how much “discomfort” he feels over being a war criminal, it may not even be knowable to him. All the same, there are a few signs that the Bush-as-patsy explanation is a little too pat. And there are historical reasons to believe that he not only knew enough to be culpable, but that he purposefully avoided finding out more than the bare minimum of what he needed. As Andrew Sullivan put it recently, there was “a desire not to know, not to have direct and explicit knowledge of what was actually being done, because of the immense gravity of the crimes.”

The first, most obvious, reason to question whether Bush really knew so little is the fact that in “Decision Points,” his listicle-cum-memoir, he claims to have directly given the thumbs-up in 2002 when the CIA asked if Abu Zubaydah, a high-ranking al-Qaeda detainee, could be waterboarded. “I thought about the 2,971 people stolen from their families by al Qaeda on 9/11,” Bush writes. “And I thought about my duty to protect my country from another act of terror.” After so judiciously weighing his duty to protect Americans from harm (which up to that point he hadn’t done so well) against his obligation not to be a war criminal, Bush came to his conclusion: “'Damn right,' I said.”

Of course, just because Bush had his ghostwriter Christopher Michel include this anecdote in his book doesn’t make it true. As a New York Times article on Bush’s response to allegedly being misled suggests, it’s quite possible that Bush is lying about giving the go-ahead to torture Zubaydah in order to shield the CIA — as well as to mitigate his embarrassment. “I suspect,” Sullivan writes in the post I mentioned previously, “Bush decided that, in his book, he had a duty to provide cover for the people who worked for him.” But even if you reject that explanation, there’s still good reason to doubt Bush was on the periphery — or, to be more precise, he was more marginalized than he may have wanted.

That reason has a name: Richard Bruce Cheney, also known as the United States' most powerful vice president. The theory here isn't that Cheney was doing a whole lot of dirty work behind Bush's back, but rather that he had taken the gloves off with the tacit encouragement and approval of the president. As Cheney-watchers — especially the Washington Post's Barton Gellman and former Cheney co-worker John Dean — have noted, Cheney's experience in the Nixon administration during its final days did not lead him to the same conclusion as most of us, that an unchecked president is dangerous for American democracy, but instead to conclude that Watergate was proof that if you're going to break the law, you'd better do it in a way that insulates the president. And as Greenwald noted in my interview with him this week, and historian Sean Wilentz wrote about in a 2007 New York Times op-ed, Cheney reached a similar conclusion after Iran-Contra (which, like Watergate, he believed to be a power grab by Democrats).

Plausible deniability, in other words, is the key phrase to understand what Bush "knew" about the global network of torture chambers and dungeons that will stand as one of the most enduring legacies of his tenure as president. And I suppose in a bitter, depressing way, that's all too fitting. Because while Bush is the American who bears the most responsibility for the evil unleashed by the United States in the wake of 9/11, the truth is that all of American society let fear and panic overwhelm its values and senses; all of American society was desperately willing to believe that impossible promise: that it had nothing to fear. And when the true costs of its panic and its terror began to float to the surface, all of American society was content to ask no further questions, and to look the other way.