Elizabeth Wurtzel: "You can’t write a memoir unless you aren’t afraid to sell everybody around you out" 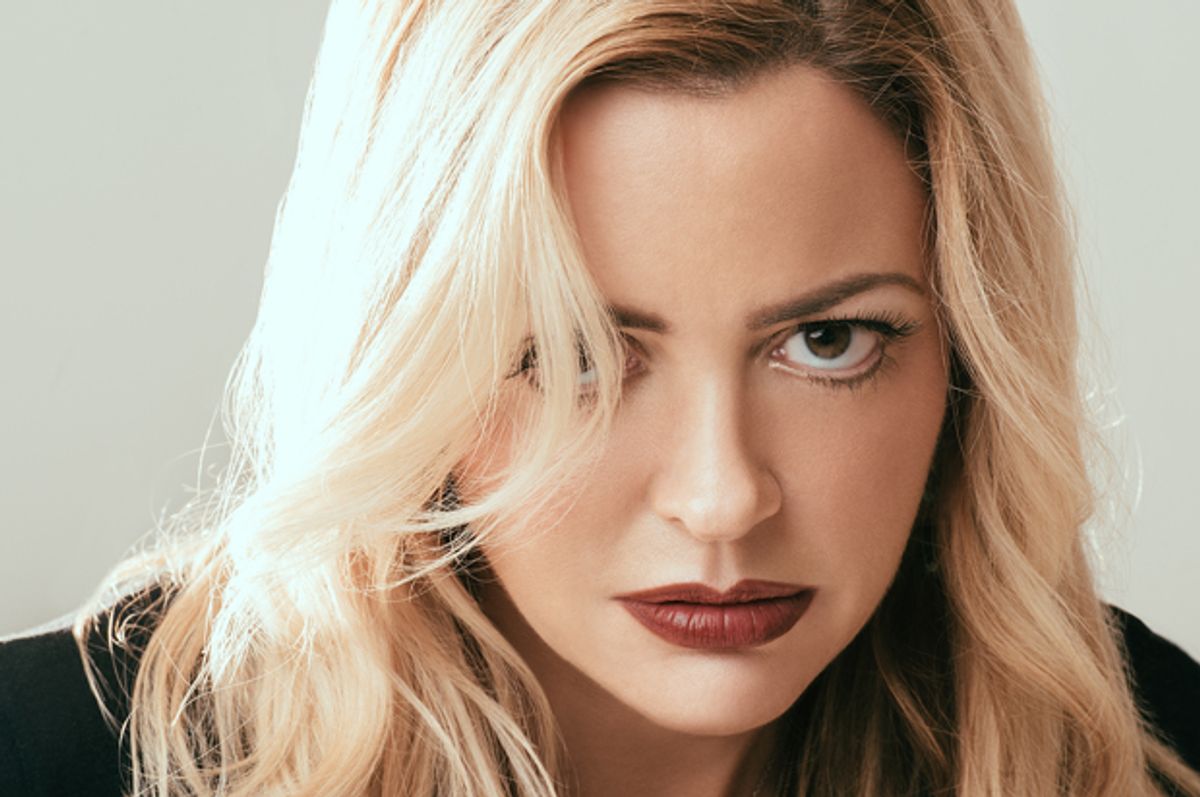 Elizabeth Wurtzel published her 1994 memoir "Prozac Nation" at 26. Since then, she's authored three more nonfiction books, including 2001's "More, Now, Again: A Memoir of Addiction," graduated from law school and written on a variety of topics, from Big Law to "The Bachelor," for the Wall Street Journal, the New York Times, Elle, the Guardian and more.

Her first book in 10 years, "Creatocracy: How the Constitution Invented Hollywood," is based on the intellectual property law thesis she wrote at Yale Law School, where she graduated in 2008. It's a historical examination, billed as "pop patriotism," of the Intellectual Property clause in the Constitution, which she credits for laying the foundation of America's entertainment world dominance in the 20th century.

The e-book came out this week, and a paperback release is scheduled for January. Given that Wurtzel helped redefine the memoir genre in the '90s, it's fitting that her new book is being published by Thought Catalog, a writing platform dominated by millennial memoirists ruminating on personal topics like "What Getting My First Tattoo Helped Me Understand About My Body Dysmorphic Disorder" and "Inner Monologue of an Emotionally Unavailable Woman."

“Creatocracy” is your law school thesis, and when I saw what the book was about it felt like a bit of a departure from your previous work. Obviously, studying law had a big impact on your writing.

I wouldn’t say that’s true, because this is not mostly what I do and I don’t think what I'm going to continue to do. I think I write about a lot of things; I’ve written a lot of Op-Eds that were mostly about politics, and I write about a lot of different things. I wrote a ton of Op-Eds for the Wall Street Journal and I wrote a ton of things for the Atlantic that were really about politics, and I think the personal is political. I think it’s terrible that there are people who can only write about themselves, and I think it’s terrible if you only write about yourself and you’re not telling a bigger story. If you can’t see that you’re telling a story with other implications, that’s just bad writing.

How much work did you have to do to make something like a law school thesis into a book the average reader is going to be able to get through?

Not very much. Actually, when I first got out of law school in 2008, the person who runs Kindle Singles just wanted to publish it as-is, just the way it was. I wrote my law school thesis the way I would everything else; it was pretty accessible the way it was written when I handed it in.

Yeah, in 2008 the big story was Radiohead releasing the pay-what-you-will album and now it’s all about Spotify and online streaming.

In the book you write that in the United States you know you’re talented because somebody is paying you for your work. I think that’s probably a statement that’s going to be controversial among artists.

I know, but that is actually true. I’m not sure what's going to happen in the future, but the truth is that people who are really talented still do get paid. I don’t know what the pay structure is going to look like; I suppose it’ll go back to the way it was before copyright and people will have patrons, but that was how it always worked. There are still systems that pay people.

When I was growing up, I was always told that you couldn't make a living as a writer, and I don’t just mean as a literary writer but doing any kind of writing. All I ever wanted was to pay my rent writing, that was my only goal, to get a job as a writer at a newspaper or, my God, a trade magazine for the sewing industry. That was the only thing I ever thought about. I always just kept finding ways to make enough money to pay my rent; that was always what was on my mind.

It makes a certain kind of sense, but I think there are other measures by which a person can measure the quality of their artistic output other than paying the rent.

The problem is, any of the other measures you have of it are really ... how would you know? What, your friends like it? Your friends are always going to like it, they’re your friends. It might be good if your enemies liked it; that might be meaningful. That’s what the great thing about the copyright system was: It was pretty true. It was a pretty good system, you know? You could know that you were talented because you got paid.

What are you working on right now?

Right now I’m just writing short things. I actually want to write another memoir and I’ve been slowly but surely plugging away at that, which would be more of a personal essay about 25 years of living in New York City and falling in and out of love.

I really do think of this as an e-book, like I think this is the perfect thing for what e-books are meant to do.

Do you like that medium? Is it something you want to do more with in the future?

I do. I think the short book is starting to have a real moment because people read on the fly so much now, and they read on devices.

The future looks like short books. At any rate, I would say that I want to write a more substantial book, and that would be a book-book.

The truth is, we should be at the point now where everything is a paperback. Whoever it is that insists upon having a hardcover should probably just get over himself. It would be fantastic if Jonathan Franzen or whoever it is would consent to having his book published only as a paperback so that everybody could just start doing that, because it’s really wasteful. I can’t believe publishing can’t become a clean, lean machine and join the 21st century. It really needs to.

You’ve been writing memoir for most of your life, at this point. I wonder, just because you launched your memoir career in your 20s, as you get older do you find yourself more or less circumspect about what you reveal of your personal life in your writing?

I think it’s the same. I really think our experiences are common. The reason it’s very easy for me to write about myself is that I know I’m just like everybody else. I know when I describe what’s happening with me that it’s going to ring true to other people. I don’t think anything that happens to me is terribly unusual, I think my experiences will remind people of their own lives, so I’m not afraid to say that I’ve done something so incredibly stupid or whatever. I know it’s me and everybody. That’s really what it comes down to.

The thing I write about getting married, I just described all the terrible relationships I’ve had because I know that’s a lot of people. Hopefully it’s not all people. I find it really odd that they publish memoirs about the rare people who have had strange lives. I think they do that thinking you see this person who seems so different but he’s just like you, that’s the idea with that. But I think what people want to read is something about themselves. I think that’s mostly what people want to get out of anything, so I feel like that’s the use of it. The more honest you can be, the more people you’ll reach. There’s not much I’m afraid to say.

You can’t write a memoir unless you aren’t afraid to sell everybody around you out. That’s the whole trip to it. You have to realize that if you’re fair people will always forgive you for that.

Has that been true for you in your life?

Yeah. It turns out people know it’s true too. It’s scary if they don’t, and there are some people who just can’t handle the truth; occasionally you come across those people, and they’re not going to read my books. They’re probably not reading much. They’re not confronting themselves at all.

Let me talk to you about a specific instance from an essay that you posted on Thought Catalog last fall. You were writing about a musician you call Clark who was married, and you had an affair. Jezebel wrote about the piece, did some sleuthing, and decided you were writing about Rhett Miller. When you were publishing that piece … what goes through your process of deciding it’s a good idea to include details that could possibly implicate another person?

I have to say, I really didn’t think I revealed that much about him. I’m surprised anybody figured out who it was, truly.

Did you regret any of that afterward?

Truthfully, the good thing is that I don’t read the comments. I don’t worry about it. I wasn’t thinking about that; that’s what I would say about it.

Have you ever had someone come to you after the fact?

No. First of all, I do really think I disguise people quite well, and I think I’m always kind to people. I mostly like the people I write about. Every so often there is something that’s really bothering me, but on the whole I’m mostly kind to people and I try to disguise people. I do my best. Nobody’s ever gotten angry at me about something I’ve said about them; that hasn’t happened. I don’t know what a typical experience of people writing memoirs is, but I’m guessing that it’s mostly not a bad thing. I don’t think too many people have people getting angry at them, assuming they do a good job. A lot of novels are romans à clef, and I doubt they have too many problems with it either.

What I’m saying is, I think this is a problem with being a writer, it’s not a problem with writing memoirs. I think occasionally somebody might be deeply offended but I think mostly this is what happens when you write.