NRA types claim they're worried about violence at hands of the state. How'd they respond to recent police killings? 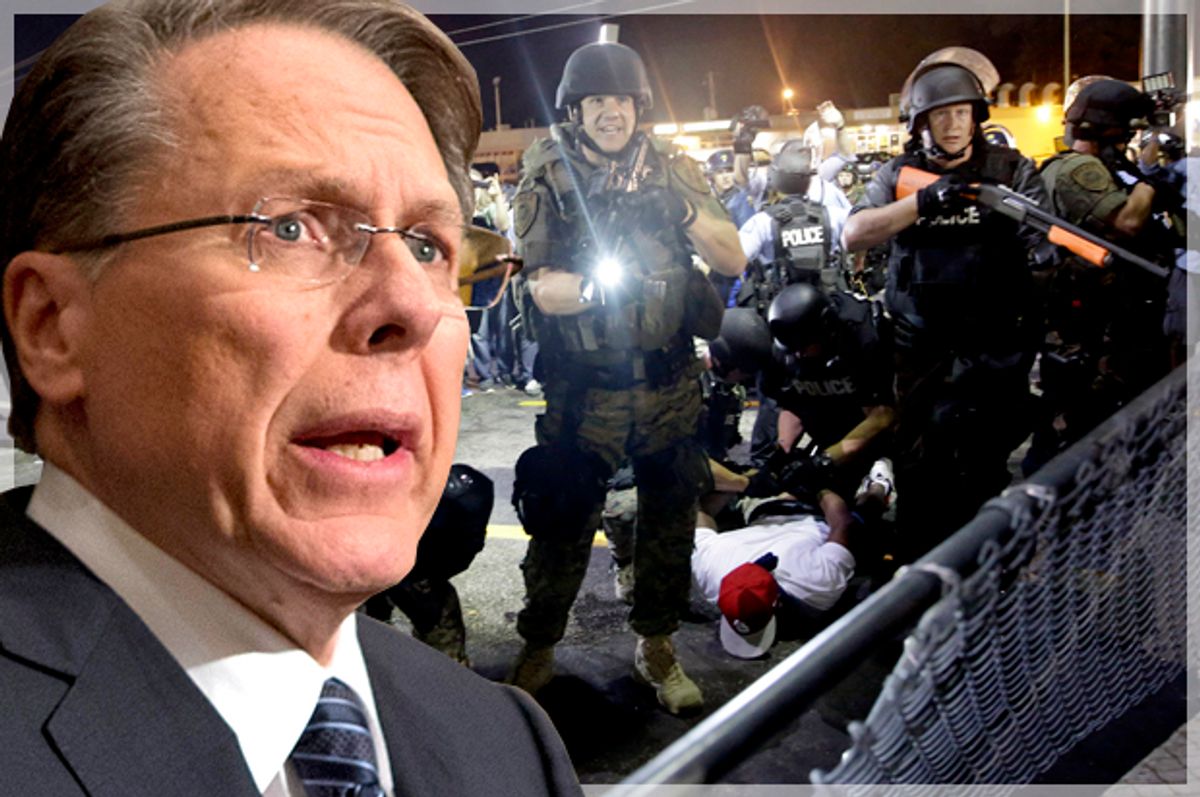 Gun extremists, whose grasp of constitutional law and American history is typically as firm as their grasp on empathy and decency, have been telling us for some time that a well-armed populace is necessary to keep tyranny at bay. The recent announcements that white police officers would not face trial for shooting unarmed black men would seem to provide a good opportunity for these anti-oppression patriots to protest governmental abuse.

After all, Open Carry Texas recently planned to “educate” the black residents of Houston’s Fifth Ward about their gun rights by marching with semiautomatic rifles and a bullwhip through their residential streets, and gun rights activists frequently inform us that their struggle for guns everywhere is just like the struggle for black civil rights, because endangering the public with loaded firearms is, apparently, just like not being white.

So how did gun extremists react to the news that Darren Wilson would not face trial for killing an unarmed fellow citizen? Let’s first turn to CJ Grisham, the head of Open Carry Texas whose Facebook profile photo shows him being arrested after he baited the police into a confrontation over a toy gun at the Texas Capitol, and who recently opined that three cop cars at the mall parking lot on Black Friday shows that America is a “police state.”

“Racists will most likely begin rioting,” wrote Grisham after the grand jury announcement. “This is one of those instances I would stand in arms at the side of the police.”

Meanwhile, Kory Watkins, Grisham’s fedora-sporting protégé and head of Open Carry Tarrant County, marked the occasion of the Ferguson announcement by going cop-blocking, his new, crowd-funded freedumb hobby in which he monitors a police scanner, then shows up to pester the police with a camera and his gun, for which, notably, the police have never shot him. On the night of the Ferguson announcement Watkins and his well-regulated militia took to the streets of Arlington to warn misbehaving drivers of speed traps. Then, on his way home from fighting the oppression of traffic laws, Watkins was hit by a drunk driver and his car was totaled. Although he longs for a libertarian utopia in which all policing is performed by vigilantes, he called the police anyway and was slapped with a $300 ticket. “I have no DL,” he explained to his groupies. “I don’t ask permission to drive a car I paid for on a road I paid for,” he said, before his acolytes opened a charity page to pay for his car.

Some hatriots actually showed up at protests around the country with guns — predictably, they were there to menace protesters rather than to stand in solidarity against governmental oppression. Jumping at the possibility of hunting black people, Oath Keepers went to St. Louis and stood on rooftops threatening to shoot looters. In Dallas, the armed open carry group Come and Take It stalked protesters as they marched against the non-indictment, claiming to be protecting private property against riots, despite the fact that the marchers were peaceful and that nobody gave Come and Take It the legal authority to use lethal force to protect strangers’ property. This didn’t stop right-wing media like Intellihub from claiming that the vigilantes prevented “a looting free-for-all” and “race war” on the streets of Dallas.

Other guns-everywhere patriots took to social media to post racist memes, swapping photos of monkeys swarming cars, doctored photos of Mike Brown’s body, and cops dispersing a crowd by dropping job applications on them — generally relishing the fact that an armed agent of the government had gotten away with killing someone, and that a militarized police force was tear-gassing their fellow citizens. When a video showing a car barreling through nonviolent protesters went viral, liberty lovers in gun rights groups responded predictably: “FUCK THEM!

"I LOVE IT! FUCKING WORTHLESS MUNKEES” wrote a gun extremist whose profile photo is a skull and whose cover photo is a picture of the baby Jesus. “I was hoping you’d see the windshield get holes from the inside out,” commented the secret group’s admin, who has aspirations to be a cop. “What’s the difference between a deer in the road and black rioters? Nothing, you hit the gas for both,” commented another. Later a news story broke about a pregnant black woman who was a passenger in a car in St. Louis and lost an eye when police shot her in the face with a beanbag. Commenters who regularly expose their children to guns said, “Dont feel for the bitch at all. Call CPS endangerment of a child” and “Her pregnant ass should have been at home.”

Ferguson provides us with yet more evidence that what gun extremists mean by “freedom” is really the freedom to insist on the special social and economic supremacy of armed white men — it’s not about fighting oppression, it’s about violently intimidating a nation with changing demographics into recognizing the continued special status of white conservative men. When gun extremists see Wilson and Brown, they don’t care about oppression because they don’t see themselves as the oppressed party. They identify with the white man with the gun, because, for them, now as always, white and might make right.