Want to really know how that provision watering down bank reform got in the CRomnibus? Here's the ugly truth 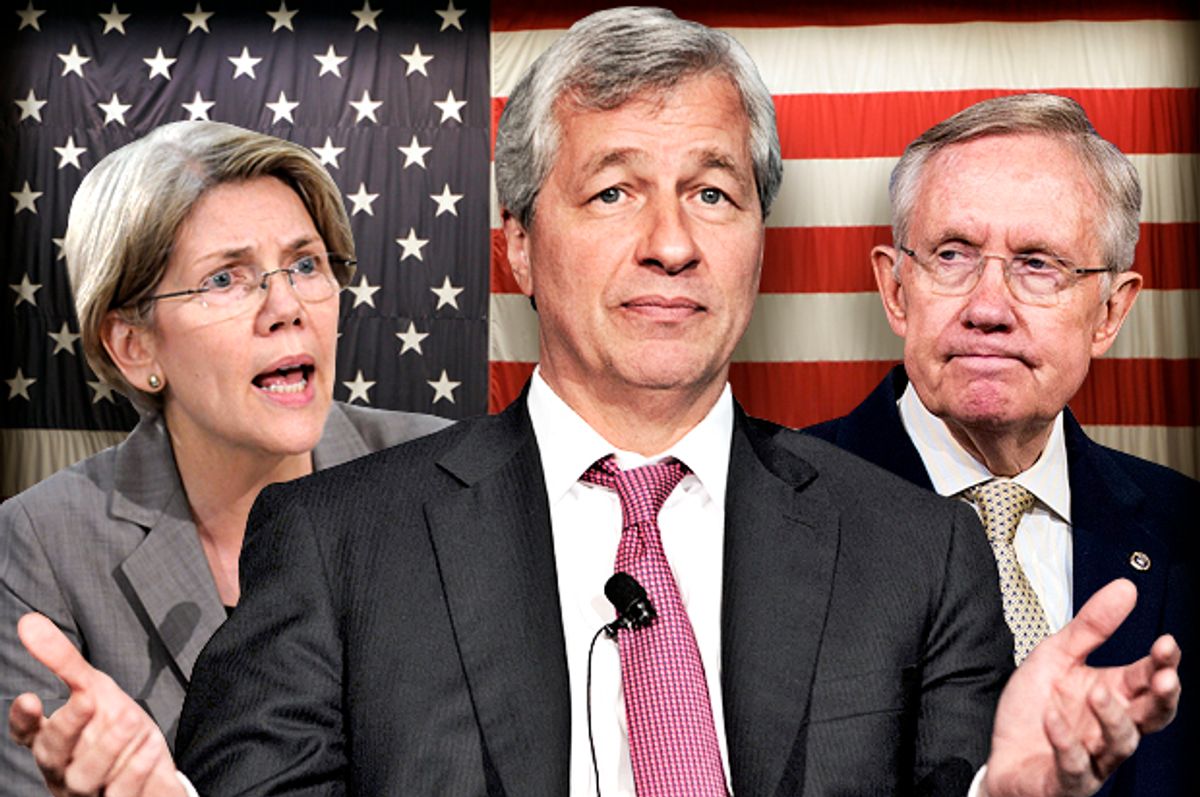 As the CRomnibus becomes law, many rank-and-file liberals have wondered how Democrats, needing to reconnect with the public after another midterm debacle, could in their first order of business help roll back a key Wall Street reform. The answer lies in the nature of this rollback, along with the real lack of communication between lawmakers ostensibly on the same side.

First of all, it’s worth mentioning that the CRomnibus was a horrible bill even without weakening Dodd-Frank. It was loaded with favors to wealthy and well-connected special interests, and its very existence, as a must-pass, short-term budget bill larded up with unrelated policy riders that will last forever, sets a dangerous precedent for the future.

But let’s just focus on this one Wall Street rider, and how it made its way into law.

The so-called swaps push-out provision of Dodd-Frank, Section 716, forced commercial banks that trade certain risky types of derivatives to split them off into a separately capitalized subsidiary, uncovered by FDIC deposit insurance. Those attempting to downplay Section 716’s importance, like Paul Krugman, highlight the fact that uninsured institutions like Lehman Brothers played a critical role in the last crisis, and that risk can cascade through an interconnected financial system no matter where those risks are initially housed. This theory actually made it easier to get the rider through Congress, giving lawmakers a plausible story that the provision wasn’t central to reform.

But this overlooks how 716 didn’t just limit taxpayer bailouts, but removed a lucrative subsidy for the four major banks – Citigroup, JPMorgan Chase, Bank of America and Goldman Sachs – that control almost all of the derivatives market. By holding derivatives inside their depository units, these banks benefit from an implicit FDIC guarantee for its counter-parties should those units fail. Keeping them in separately capitalized entities costs the banks more in short-term borrowing. As the Wall Street Journal’s John Carney points out, the banks’ parent companies have lower credit ratings than the depository units, which affects the price banks can ask for derivatives.

So in the end, removing 716 just gives four banks a giant subsidy they would lose by splitting out the derivatives books, no different than the other CRomnibus riders that aid the bottom lines of wealthy benefactors. That has implications for safety as well – if risky derivatives are cheaper to fund and more profitable to trade, banks will increase their production. Furthermore, banks’ concerns about possible energy swap losses related to the crash in oil prices added a sense of urgency.

I don’t think this means “financial reform is working,” as Matt Yglesias does, but it means some provisions have constrained bank profits, if not their risk. And the banks, up against a 2015 deadline to split off their swaps trading, wanted Congress to support their inalienable right to make money by killing the rule.

The origins of eliminating Section 716 go back to the writing of Dodd-Frank itself. Blanche Lincoln, author of the derivatives regulations in the bill, initially included practically all swaps. A combination of lobbyists, Wall Street-friendly “New Democrats” and the Treasury Department significantly rolled that back, limiting it to the riskiest bits, like credit default swaps that don’t go through a clearinghouse.

After wounding the provision, the banks employed their allies in Congress to disappear it entirely. A bipartisan coalition, including Jim Himes, D-Conn., a former vice president at Goldman Sachs, introduced a host of bills to weaken derivatives rules as far back as 2011. HR 992, the “Swaps Regulatory Improvement Act,” sailed through the House Financial Services Committee 53-6 in spring 2013. The language of this bill, written by Citigroup lobbyists, is virtually identical to what passed in the CRomnibus. Rep. Maxine Waters, the ranking member on the Democratic side, waged a fairly lonely battle to limit Democratic support. On the House floor, 70 Democrats voted for the final bill, far fewer than was initially expected. This enabled Senate Democrats to ignore the bill as a stand-alone entity.

House Republicans, egged on by Wall Street lobbyists, tried another tactic. Kevin Yoder, R-Kan., a two-term member of the House Appropriations subcommittee overseeing financial services, stuck HR 992 into the financial services appropriations bill without a formal vote, pitching it as an aid to “the farmer in your district who wants to get a loan,” rather than Jamie Dimon or Lloyd Blankfein. Nobody ever tried to strip it out, and the rider easily advanced through the process.

Stuffing the rollback into a must-pass bill turned out to be a genius move. Lawmakers on the Appropriations committees have less understanding of complex bank maneuvers like derivatives than those on the banking committees. Furthermore, because all parties expected a year-end omnibus bill anyway, it didn’t make as much sense to fight every little provision, when a negotiated process would cover that down the road.

Finally, the Appropriations committees are notoriously insular. Whenever policy riders crop up, committees of jurisdiction try to reach out to appropriators with rapid response to explain their significance. But aides described a one-way street for communication, with lawmakers not on Appropriations frequently kept in the dark. Appropriators either consult the committees or ignore them at their own discretion and without warning. Though reformers assumed for years that the swaps provision would be attached to some must-pass vehicle, they had no idea about the fate of the rider until the whole bill was unveiled. That includes House Democratic Leader Nancy Pelosi, who described the process on the bill as “radio silent.”

Barbara Mikulski, D-Md., the outgoing chairwoman of the Senate Appropriations Committee, negotiated the CRomnibus with her House counterpart Hal Rogers, R-Ky. She ultimately signed off on the rider, in exchange for modest additional funding for the Commodity Futures Trading Commission and the Securities and Exchange Commission, two Wall Street regulators.

Bank reform groups and sympathetic lawmakers didn’t consider it a good trade to give a couple of regulators a bit more money in exchange for limiting what they can regulate. But Mikulski claims that she faced nearly 100 riders in negotiations and fended off most of them. She also figured that any deal would get worse in 2015, with big majorities coming in for Republicans.

But how could one senator get so much leeway on a bill that makes huge changes to multiple aspects of public policy? That’s the nature of the appropriations process, an opaque and often undemocratic beast where lawmakers who may not have expertise on certain issues nevertheless get free rein to make decisions about them.

Senate leaders had to know that this swaps provision, for example, would cause plenty of consternation among colleagues like Elizabeth Warren, D-Mass. But they gave Mikulski all the space she needed to negotiate, and then pronounced themselves satisfied with the results. This stands in sharp contrast to Ron Wyden on the Senate Finance Committee, who watched Harry Reid go completely over his head in trying to negotiate a year-end tax deal.

Why did Mikulski get the hands-off treatment? For one, she’s earned respect as a longtime senator. Also, the leadership probably welcomed keeping their fingerprints off the final product, which was bound to be ugly. Establishment Democrats, including the White House, never really liked Section 716 to begin with, so they weren’t too displeased with watching it go, regardless of the blueprint it provided for repealing regulatory actions inside budget bills. Furthermore, Reid had something he wanted in the CRomnibus – the reauthorization of a travel promotion bill that provides lots of advertising for Las Vegas’ tourism industry.

But this shows real dysfunction in how Democrats work. Giving Mikulski carte blanche led to an embarrassing deal that revealed real fissures within the party caucus. The leadership should have seen this coming, but either let it happen or actively participated in the rollback (a claim from the Wall Street Journal editorial board that Chuck Schumer “engineered” the swaps provision had to be retracted within hours).

More important, the leadership failed to listen to the liberal wing, who were loudly and publicly opposed to the swaps rider. This is a familiar refrain from liberal congressional aides; their side of the argument never gets represented at the negotiating table.

The hardening conventional wisdom is that Wall Street lost more than it won with its power play on the CRomnibus, because it revealed itself as a giant liberal target. Mainstream Democrats definitely underestimated the strength liberal reformers brought to the fight, so maybe future actions will be undertaken with that in mind.

But it’s just as likely that the establishment didn’t mind the outcome, letting them look like the sensible centrists “getting something done.” That was probably the motivation behind President Obama ultimately endorsing and even whipping for the bill.

Whatever the outcome, we know that Wall Street exploited a fractured Democratic caucus to restore a big subsidy to its profits. And if Democrats don’t contend with that – or worse, if they don’t want to – you can expect many more congressional victories for the financial sector.