Fox Newser lashes out at the progressive populist 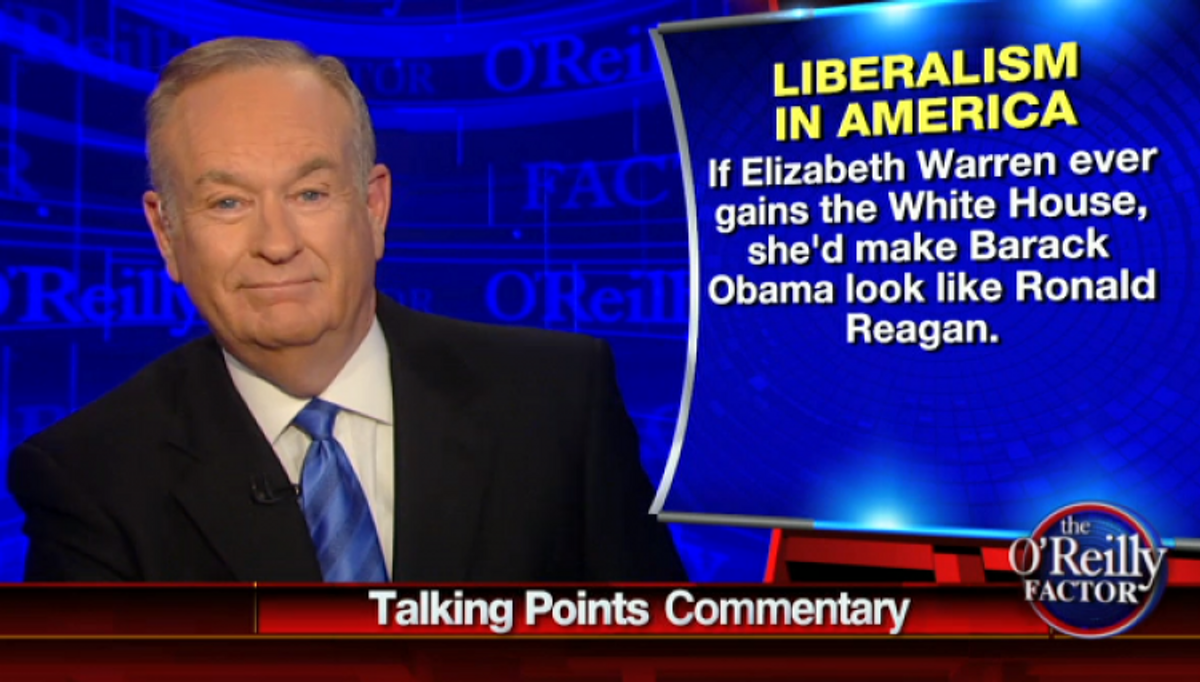 As the launch of the 2016 presidential cycle draws ever closer, Fox News can only spend so much time demonizing hawkish centrist Hillary Clinton as the reincarnation of Karl Marx. Viewers want some measure of variety, and the recent presidential buzz surrounding Massachusetts Sen. Elizabeth Warren offers the network a chance to mix things up a bit. Bill O'Reilly seized that opportunity last night, getting downright apoplectic about what a Warren presidency would mean for America -- and demonstrating why conservatives fear her crisp, progressive populist message.

While Warren insists she's "not running for president," she hasn't definitively ruled out a White House bid, and that's enough to convince groups like MoveOn.org, Democracy for America, and the Ready for Warren super PAC that it's worth the effort to convince the senator to enter the 2016 contest. Naturally, O'Reilly felt compelled to weigh in on the Warren for President boomlet, and to hear him tell it, she's nothing short of a dangerous radical.

"Ms. Warren despises Wall Street and big banks, saying they have rigged the capitalistic system," O'Reilly said during the "Talking Points Commentary" segment of last night's "The O'Reilly Factor." The host didn't dwell on the possibility that Warren's anti-Wall Street message has caught fire because Americans harbor deep distrust toward banks and believe that the financial system is indeed rigged against them.

"In fact, she's not a big fan of capitalism in general," O'Reilly said, rolling to the widely circulated clip in which Warren notes that businesses and corporations benefit from public investments and declares that "part of the underlying social contract is you take a hunk of that and pay forward for the next kid who comes along."

It was as concise an articulation of the progressive worldview as we've heard in years -- and it had the virtue of appealing simultaneously to Americans' often-competing communal and individualistic impulses. But O'Reilly proclaimed that Warren's statement actually signaled something far more sinister.

"Sen. Warren’s vision of the, quote “underlying social contract” is what may directly affect you," O'Reilly warned viewers. "She believes that all Americans should pay to abort fetuses, no matter what you think about the destruction of potential human beings."

"She believes that the social contract should allow punitive taxation on corporations and wealthy individuals in order to provide for those who do not have very much. Such taxation would cripple the consumer-driven marketplace, as we have seen under President Obama," he continued. The marketplace appears to have missed that memo; job growth continues to pick up steam, nearly two years after Obama let George W. Bush's tax cuts for the wealthiest Americans expire in 2013, while the Dow Jones Industrial Average has increased 115 percent on the radical Marxist Kenyan's watch.

Why doesn't Warren understand that the odd mass shooting, unaffordable health insurance, and leaving wages at the whim of corporate overlords are simply the prices we pay for precious liberty?

On foreign policy, O'Reilly suspects she'd be no better. Sounding very much like it's still 2004, he said he couldn't see Warren "aggressively confronting the jihadists, threatening Iran, or facing down Putin." He left unclear what these intangibles would entail. But point well taken -- as Bush's presidency so convincingly demonstrated, nothing works in foreign policy quite like cowboy swagger.

To his credit, O'Reilly was at least upfront about one thing. Just as conservatives now unfavorably contrast Obama with Bill Clinton, whom they impeached and, in some quarters, literally accused of murder, O'Reilly suggested that a President Warren would make conservatives pine for the Obama era.

"It is clear that the liberal policies of President Obama have weakened this nation abroad, created a stagnant economy and a staggering national debt," he said. "But if Sen. Warren ever gains the White House, she’d make Barack Obama look like Ronald Reagan."

Watch O'Reilly's unhinged attack on the senator at FoxNews.com.