"It may out-Ferguson Ferguson": Why Milwaukee's police violence will horrify you

The sad lesson of Milwaukee is that what happened to Mike Brown is no exception. Here's the terrifying reality 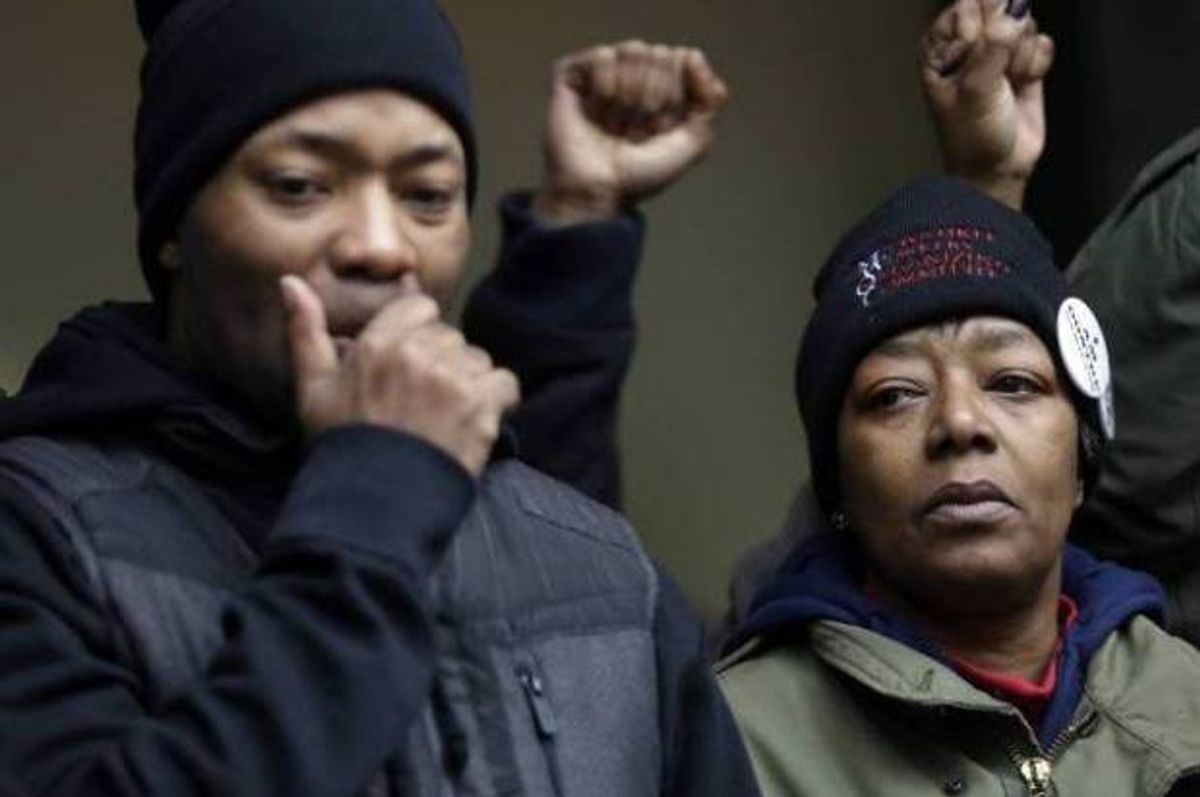 While the Hamilton case has not received as much media attention as the Michael Brown shooting, it may very well out-Ferguson Ferguson. Hamilton, an unarmed 31-year-old African-American man, was shot 14 times by white police officer Christopher Manney on the afternoon of April 30, 2014. Hamilton, who had a history of schizophrenia (which he had received treatment for), had been sleeping in downtown Red Arrow Park; two officers had checked on him earlier in the day and concluded that he was not a threat to himself or others. Toxicology reports found no drugs or alcohol in Hamilton’s system at the time of his death. Half of the bullets that hit Hamilton traveled in a downward direction before striking their target, with one shot hitting him in the back. According to Jonathan Safran, an attorney for the Hamilton family, no gunpowder residue was found near Hamilton’s 21 gunshot wounds – a finding that Safran suggests shows Manney fired from some distance when he discharged his weapon that day.

As in Ferguson, those in positions of authority within Milwaukee have focused their attention not on such acts of police violence, but instead on those raising their voices to protest such acts. Two days after St. Louis prosecuting attorney Bob McCulloch attempted to indict both “the 24-hour news cycle” and Twitter in the shooting death of Michael Brown, Milwaukee police chief Edward Flynn engaged in his own round of verbal acrobatics while describing a march through downtown Milwaukee meant to show solidarity with protesters in Ferguson, Missouri. Commenting on the close to 300 individuals who participated in the rally, Flynn told the host of “Fox & Friends” that the majority of protesters were “hipsters” from out of town. “Their last experience with the police,” Flynn snidely concluded, “was in their DARE class.” Milwaukee County Sheriff David Clarke recently blamed outside “anarchist groups” for bringing “mob rule” to the city. Democratic Mayor Tom Barrett, in the immediate moments after the Chisholm announcement, could only weakly note that “We cannot allow all police officers to be demonized. What we need now is peace.”

Yet at least Barrett is now saying something. Throughout the eight moments following the April shooting, almost all of the details related to Hamilton’s death were made available solely by his family. In the face of excruciating state silence, the Hamiltons made public Manney’s name on Sept. 17, 2014, close to five months after the shooting took place. The family also made the decision to release their son’s autopsy report on Dec. 1, 2014 – once again after no official action (the Hamiltons had received their copy back in July 2014). A review of the shooting authored by the Wisconsin Department of Justice Division of Criminal Investigation was submitted to the Milwaukee County district attorney’s office in early August 2014. This document was meant to inform the district attorney’s decision on whether to issue criminal charges against Manney. No portion of this document was released until Chisholm’s press conference on Monday.

On the one hand, the Hamilton case tragically illustrates that what happened in Ferguson is far from exceptional. What many pundits still try to pawn off as an isolated incident is in fact part of what can best be described as a national epidemic. Yet what is particularly instructive about these events in Milwaukee is their broader context. The history of Milwaukee – and more specifically the history of police misconduct in Milwaukee – provides the perfect vehicle through which to understand how the culture that leads to events like Ferguson (and Staten Island and Cleveland) is created. Sadly, this history is all too familiar in cities across America, and appears to have one common goal: to demean and dehumanize African-American men.

Often, this history builds off of itself. Two officers named in one of the civil cases filed in late November, Jeffrey Cline and Jason Bleichwehl, had taken turns sitting in the squad car in which Derek Williams, a 22-year-old African-American male, would take his last breath in on the night of July 6, 2011. Roughly apprehended on suspicion of attempted robbery (a medical examiner documented 30 scratches, cuts and bruises on Williams’ arms, elbow, feet, legs, abdomen, and back), Williams, who suffered from sickle cell crisis, died while Officers Cline, Bleichwehl and Richard Ticcioni ignored his panicked claims of being unable to breathe. Williams begged officers to roll down a window and call an ambulance. Yet, according to the transcript of the squad-car video, Williams was told by one unidentified officer, “Nope, you’re talking to me, you’re just playing games.” An inquest jury found probable cause to support charges against these three officers for failure to render aid, as they took seriously an amendment to Williams’ autopsy that, while not discounting the role of sickle cell crisis, deemed his death a “homicide” due to “flight from and altercation with police.” A special prosecutor, however, declined to file charges, arguing that he did not have the evidence to support such a case.

Often, this history repeats itself. For many within Milwaukee’s African-American community, the Williams’ case brought up painful memories of Frank Jude Jr. and Curtis Harris, two black men who found themselves on the receiving end of similarly questionable police tactics. In 2004, 26-year-old Jude Jr. was brutally beaten by a group of off-duty Milwaukee police officers who believed that he had stolen one of the officer’s wallets.  In addition to suffering a barrage of kicks and punches, Jude Jr. also had a pen inserted into his ear and had his pants cut off with a knife, leaving him naked on the sidewalk. The previous year, Harris had been rendered a quadriplegic following an altercation with white police officer Kevin Clark in the 3rd District police station. Clark, who soon left the force amid accusations of insurance fraud, was never held accountable for his actions, even though the City of Milwaukee agreed to a settlement package of $3 million to Harris in 2009. Of the 13 officers identified as playing a role in the beating of Jude Jr., just three – Jon Bartlett, Daniel Masarik and Andrew Spengler – were convicted of any crime associated with the incident.

Often, this history is longer than many care to admit. All of the above cases took place in the still relatively young 21st century. Throughout much of the 20th century, Harold A. Breier, Milwaukee’s chief of police from 1964 to 1984, saw the city’s growing African-American community as a threat that needed to be contained. Under his watch, a series of African-American men died at the hands of his officers, including the high-profile cases of Clifford McKissick (1967), and Ernest Lacy (1981). The death of Lacy – who died of respiratory distress after being wrestled to the ground by white police officers (all for a rape he did not commit) – brought to light the repressive tactics that Breier and his men had been employing in Milwaukee’s increasingly segregated black neighborhoods for decades.

Often, this history creates a counterintuitive reality where mobilization against such tactics is strongly deterred. This history of oppression is so long, so brutal and so complete that it becomes difficult to imagine it ever actually changing. If this is the case, why risk standing up to it? Even largely non-violent protest movements – like the one that rose up in the late 1960s to call for open housing legislation in Milwaukee – have been met with intense police opposition. Police chief Breier often ordered his officers to remove their badges before patrolling such open-housing marches, making it difficult for participants to report any police misconduct. Young African-American men involved in the civil rights movement found themselves subject to around-the-clock surveillance; officers would constantly harass such activists and continually arrest them for such trivial offenses as littering and jaywalking. These tactics undoubtedly helped put a chill on movement-mobilizing in the post-1960s era.

Such a history makes it clear that the problems Flynn must now confront predate his 2008 arrival in Milwaukee. And, to his credit, Flynn has rightly allocated more and more police resources to the neighborhoods hardest hit by things like drug activity and gun violence. Yet Flynn has been quick to dismiss the legitimate questions posed by those concerned by the recent death of Dontre Hamilton. One could perhaps excuse Flynn’s position if the Hamilton case was an anomaly; sadly, it is just another example of police action that ultimately serves to both hurt and humiliate a city’s African-American population. Hamilton’s death should best be seen as yet another building block for a culture that creates moments like Ferguson, circa 2014. Until this culture – and the history that has shaped it – is confronted, there will be more Fergusons. And more Dontre Hamiltons.

Yet recent events in Ferguson suggest that this history can be confronted. Before Michael Brown’s death on Aug. 9, 2014, very few Americans, myself included, had ever heard of Ferguson, Missouri. A black man dying at the hands of a police officer in a “Rust-Belt” city like Detroit, Cleveland, or Milwaukee was perhaps, for lack of a better word, expected; no one knew what to initially make of such an event in an unknown Missouri suburb.

Soon, Ferguson became a sort of blank slate, one on which anyone could project anything. As the site where Officer Wilson took the young man’s life came to attract pilgrims from around the country, the discussion surrounding Brown’s death quickly transcended geography and focused instead on the realities of a broader systemic racism. The vacuum of the unknown was soon filled by a chorus of voices sharing similar stories of heartbreak – and demanding action. Such a process has begun to galvanize a new generation of activists across America, including those that police chief Flynn is so quick to dismiss here in Milwaukee. Within the city, such activists, including the Hamilton family, have already pushed political leaders to act.

On Dec. 18, Barrett – with the Hamiltons by his side – announced that all Milwaukee police officers would receive training on how to deal with individuals with mental health issues. Still, the non-indictment of Christopher Manney makes it clear that much hard work remains. Those leading the charge can take some comfort in the fact that history doesn’t have to be repeated. It’s time to revise this shameful narrative.