The Year in Uber scandals: A surge-priced cruise through the company's biggest controversies 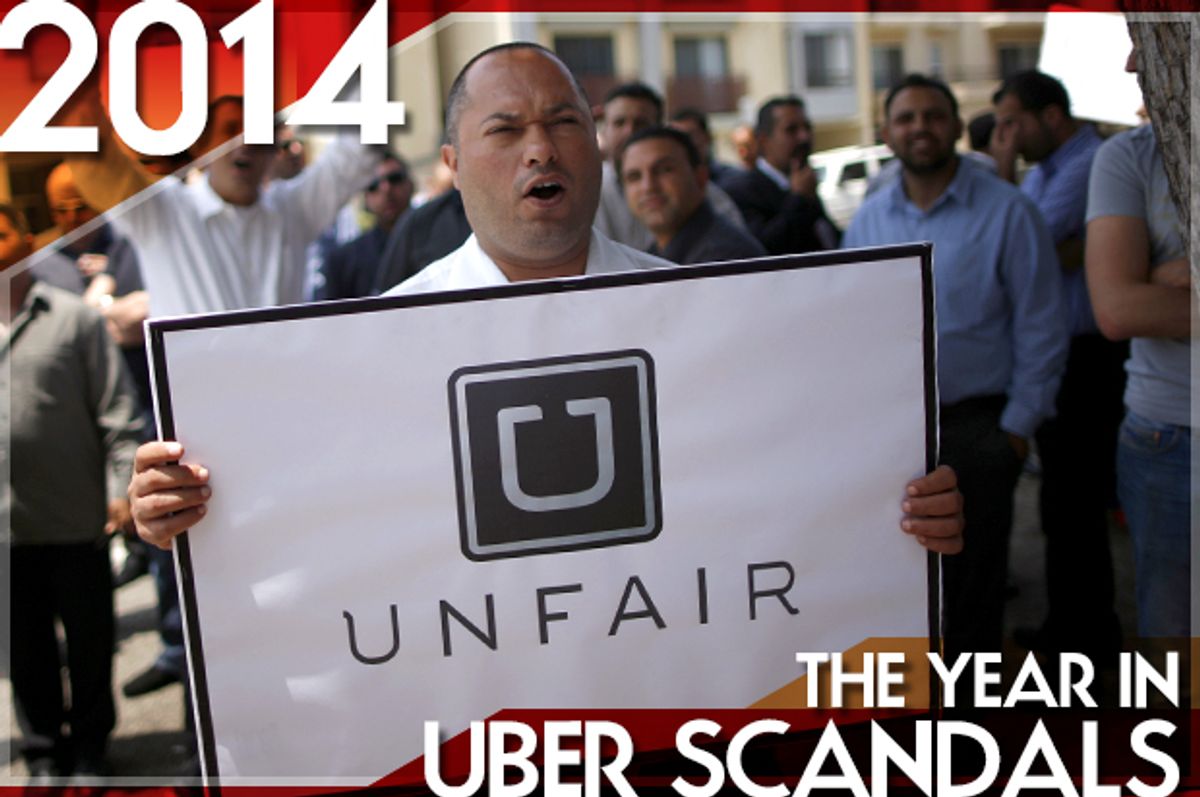 2014 has been the year of Uber, as millions have forsaken their city’s fleet of ubiquitous yellow and black cabs in favor of the handy, app-based ride-sharing system. Uber is one of the success stories of the sharing economy and has completely revolutionized how we think about getting from A to B. Yet its ascent has also come at a steep cost: This year has seen Uber racked by a seemingly endless string of scandals and P.R. disasters, with investor Peter Thiel calling Uber the “most ethically-challenged company in Silicon Valley.” Uber had its fair share of controversy in 2013 as well — particularly the debate over its controversial surge pricing tactics — but 2014 was truly the year of the Uber scandal.

Join us now as we take a surge-priced cruise down memory lane:

The year in Uber catastrophes kicks off, as a former Uber driver named Syed Muzaffar hits a family in a crosswalk, killing the 6-year-old daughter, Sofia Liu. The girl’s family sues Uber in January, kicking off a debate over whether Uber is liable in such cases. The company alleges that they are not, because Muzaffar was between passengers at the time.

Documents leaked to journalists show that New York Uber employees ordered and canceled rides from a competing car service called Gett in order to sabotage its business (and this won’t be the first time this sort of thing happens).

GQ publishes an article called “Confessions of an Uber driver,” in which a writer tries his hand at being a driver for a week and experiences some pretty wild stuff.

A Chicago passenger sues her Uber driver Jigneshkumar Patel for sexual assault, alleging that he locked the car doors and groped her legs, breasts and groin before eventually letting her out.

Daily Beast writer Olivia Nuzzi shares an experience of Uber harassment: “At the end of the ride, the Uber driver asked me if I had been near Lincoln Center a few hours earlier. I said I hadn't, since I didn't remember walking past there. Then he took out his iPad. 'Really?' he asked. 'Because you look like this girl.' He turned the iPad around to face the back seat. To my surprise, I saw a full-length, close-up picture of me, wearing the workout clothes I’d had on an hour previously.” Her piece also reveals flaws in Uber’s privacy system, including the fact that drivers can see passengers’ full names.

Valleywag’s Sam Biddle points out that Uber has added a $1 “safe ride fee,” and asks, “Why Is Uber Charging You Extra to Not Get Assaulted?”

A woman demands a refund after her driver is arrested mid-ride.

Uber driver Daveea Whitmire is charged with misdemeanor battery for an incident that occurred the previous November, in which he struck and elbowed a passenger following a dispute. As a number of journalists pointed out, Whitmire, who has had previous felony charges on his record,  should not have passed Uber’s background check services to begin with.

An Uber driver is arrested for allegedly kidnapping a woman in West Hollywood with the intent to sexually assault her. After passing out drunk in the car, the woman reportedly woke up in a motel to find the driver in the bed with her.

Taxi drivers across Europe, from London to Madrid, protest against Uber. Traffic in central London is brought to a standstill.

After the surge-pricing controversy that flared up last year, Uber agrees to cap surge pricing during emergencies nationwide.

A glitch allows passengers to find out their Uber passenger ratings, prompting a debate about whether drivers and passengers should be rating each other in the first place.

CNN Money reports that Uber employees ordered and canceled more than 5,000 Lyft rides in an attempt to sabotage its competitors, for the second time this year.

Uber goes on a lobbying blitz to fight a potential bill in California that would increase regulation. After a lawmaker involved is arrested for DUI, Uber CEO Travis Kalanick shames him on Twitter.

A report from Verge details how “Uber is arming teams of independent contractors with burner phones and credit cards as part of its sophisticated effort to undermine Lyft and other competitors.” The report details the company’s extensive sabotage strategy, which includes attempting to poach their drivers through a nationwide campaign called SLOG (driver-poaching is something Lyft, too, has been guilty of). Here’s an extensive article about the Lyft/Uber rivalry in WSJ.

Uber is banned in Germany.

A lawsuit accuses Uber of violating the Americans With Disabilities Act after encountering numerous incidents of drivers refusing to drive blind passengers with service dogs, and once even putting a dog in the trunk.

A San Francisco Uber driver hits a passenger on the head with a hammer after an argument. Recently it was revealed that his injuries may cause the passenger to lose his eye.

Uber announces it is partnering with Spotify so passengers can choose what music they listen to during their rides. Even this move is not immune from criticism, with the Awl’s Matt Buchanan writing that it “furthers the ongoing logistical process of dehumanizing Uber drivers.”

At an off-the-record dinner, Uber executive Emil Michael makes comments suggesting he thinks that Uber should hire a team of opposition researchers to dig up dirt on journalists who criticize the company, particularly PandoDaily journalist Sarah Lacy, who has spoken out against the company. A BuzzFeed editor who claimed not to know that  the dinner was off-the-record published the remarks.

In the wake of the BuzzFeed story, the company says it is investigating a top New York executive for tracking a reporter using a feature called “God View” without the reporter’s permission.

Sen. Al Franken writes a letter to Uber in the wake of the BuzzFeed article that raises a number of concerns about the company’s approach to privacy.

ValleyWag publishes an interview with a passenger who alleges her driver brought her to an empty lot in the middle of the night and locked her in the car, only agreeing to leave when she began screaming and causing commotion. When she contacted Uber about the incident, the automated response apologized for the "inefficient route."

An Uber driver is permanently deactivated for a “hateful” tweet, which is just a link to a PandoDaily article with the caption “Driving for Uber, not much safer than driving a taxi.” Just one of many instances of Uber drivers claiming the company treats them unfairly.

Uber Lyon gets in hot water after a promotion offering to pair passengers with “hot chick” drivers. “Who said women don’t know how to drive?” reads the sexist Uber blog post.

A San Francisco Uber driver allegedly pulls a female passenger out of his car and throws her iPhone into the street.

Drivers in six cities stage protests outside Uber offices as part of a “global day of protest” against fee hikes and fare cuts.

PandoDaily journalist Sarah Lacy publishes an article called “The horrific trickle down of Asshole culture: Why I’ve just deleted Uber from my phone”

L.A. Weekly publishes an article critical of Uber called “Confessions of an Uber Driver,” criticizing the company’s poor treatment of drivers and bad business practices. Uber responds by sending L.A. Weekly a puff piece of its own.

A Nevada judge temporarily bans Uber from operating unregulated within the state, in what is the U.S.’ first statewide ban.

New Delhi bans Uber shortly after one of its drivers is arrested for allegedly raping a passenger. The driver was accused of driving the passenger to a secluded spot and sexually assaulting her, and the company reportedly had failed to carry out any background checks on the driver prior to the incident.

A Chicago Uber customer alleges she was sexually assaulted by an Uber driver. After being attacked during the ride, she claims she blacked out and woke up later in an apartment with the driver on top of her.

Meanwhile, two California DAs file a lawsuit against Uber alleging that the company has been making “false and misleading statements” to customers, including misrepresenting the quality of its driver background checks and that it defrauds customers with illegal surcharges.

Despite Uber’s promise not to use absurd surge pricing during storms and other disasters, Uber’s fares surge to 3.8x when a heavy storm hits San Francisco.

Instead of getting people away from the location of the Sydney hostage crisis for free, Uber runs a 4x surcharge. Mashable calls Uber's surge pricing "the PR crisis that won't go away."

France announces it is banning the app as of Jan. 1.