Selma is hardly history: Yet after Ferguson and Staten Island, we may be less optimistic today

Despite the South's explicit racism, the civil rights fight brought hope. It's hard to feel that way now 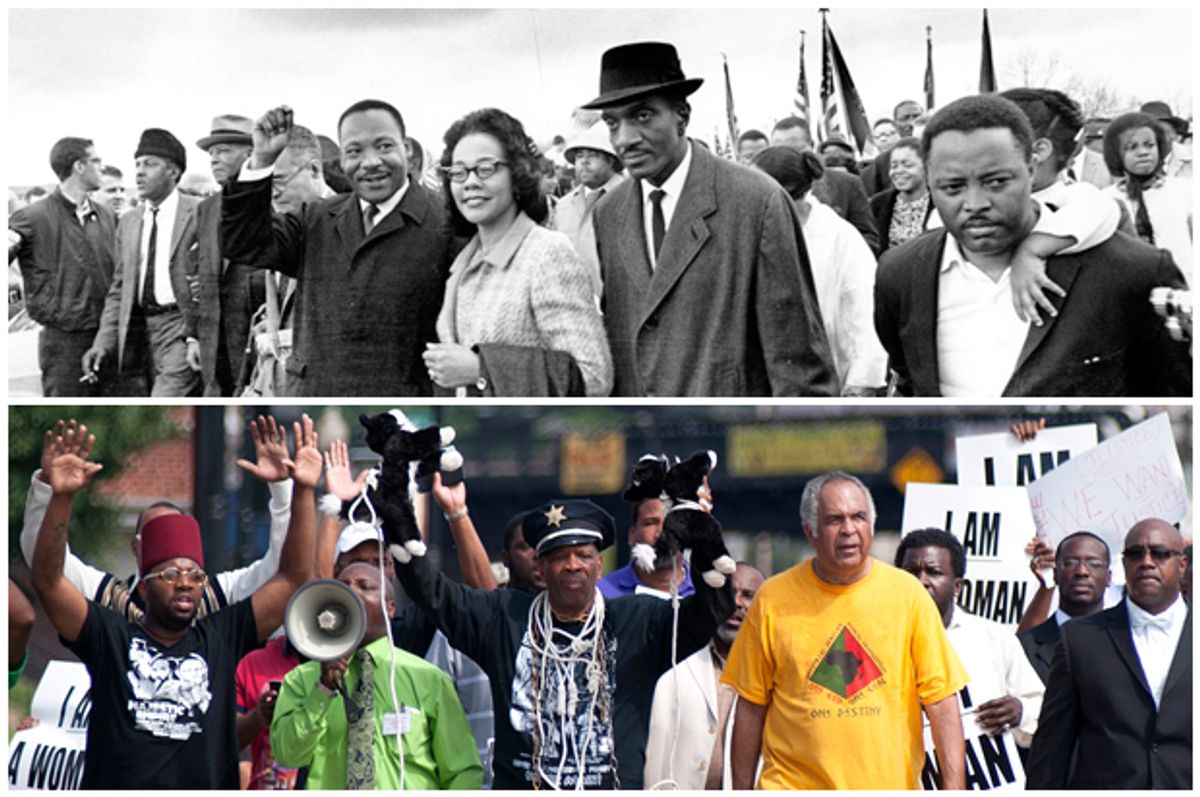 I’ve never forgotten what it was like to be in Selma at the start of the March 21, 1965, Selma-to-Montgomery Voting Rights March, but I’ll still be in the ticket line for the opening of the new feature film, "Selma."

I’m anxious to see how Selma is portrayed by a director and actors for whom it is history rather than personal experience.  The college students I teach have only a hazy knowledge of Selma and its impact on the passage of the Voting Rights Act of 1965.

Today, though, Selma has taken on new relevance as it approaches its 50th anniversary.  The failures of grand juries in Ferguson, Missouri, and Staten Island, New York, to indict the police officers whose actions led to the deaths of two unarmed black men has made the gross injustices the civil rights movement fought against in the '60s seem part of our times.

I am not nostalgic about Selma, but I am struck by how, despite the explicit racism of the South in 1965, there was more optimism then about America’s racial future than we have today.  In New York, where I live, nightly  #blacklivesmatter marches protesting events in Ferguson and Staten Island have been able to disrupt the city to a degree unthinkable 50 years ago, but among the marchers with whom I have spoken, their hopes are modest and specific.  They want to change how policing is done in communities of color, and they are calling for special prosecutors in cases of alleged police misconduct.  Few, though, speak of a new racial day in America arriving any time soon.

In 1965 I was far less sophisticated politically than today’s marchers.  Martin Luther King Jr.’s Southern Christian Leadership Conference had been conducting a voter registration campaign in Selma since January 1965, but my awareness of SCLC’s efforts did not come until the night of March 7.  That was the date on which everything to do with Selma changed.   Shortly after 9 o’clock, ABC interrupted its Sunday evening movie,"Judgment at Nuremberg, with pictures from Selma that showed Alabama State Troopers attacking a column of black demonstrators while jeering crowds rooted the troopers on.

What shocked me about the attack, which quickly became known as “Bloody Sunday,” was that the troopers made no effort to conceal their actions from the television cameras. They were confident they would not be called to account.

The story of Selma has been told movingly by a number of historians — particularly, David Garrow in "Protest at Selma" and Taylor Branch in "At Canaan’s Edge: America in the King Years 1965-68."  But in March 1965 when I cut my graduate classes at Brown and headed south, I had little sense that a historic undertaking was about to happen. A second protest march, this one on March 9, had been peaceably turned around, and  I worried that the March 21 march might remain small, even with Martin Luther King and a series of celebrities heading it.

I was encouraged by the fact that on March 15, in a nationwide television address, President Johnson announced that he was sending a voting rights bill to Congress, and I took heart from the fact that Johnson followed up his address by calling out the Alabama National Guard to protect the March 21 march. Nonetheless, when I got to Selma on the night before the march, my worries continued.

The arrival of outsiders like me put an enormous strain on the black families in Selma who were supporting the march. The racial tensions in Selma and the surrounding counties — already high — were heightened still more by our presence.  I was lucky.  A black family opened up its house to me and several others, but many who arrived at the last moment ended up spending the night on the pews of Brown Chapel, the church at the center of civil rights activity in Selma.

In contrast to the end of the march, when 25,000 gathered in Montgomery to hear Martin Luther King speak, the crowd on that first day of the march was just 3,200 — an estimate that still strikes me as high.  It did not take King’s assistant, Andrew Young (then Andy Young), long to organize us.  Wearing bib overalls and a blue jacket, he stood in the middle of the street in front of Brown Chapel and got everyone into rows that would later fill Highway 80, from side to side.

For a moment, the march felt like the start of a small town’s Fourth of July parade, but things quickly turned ugly as we began moving through Selma.  I remember the car that played “Bye, Bye, Blackbird” over its loud speakers and a homemade “Coonsville U.S.A” sign that was impossible to miss. Later, the cries of “White N****r,” especially from teenagers who enjoyed shouting in unison as if they were spectators at a football game, became routine along the march route after we left town.

The following day, with a group of volunteers, I helped clear the pasture where the small band of marchers making the complete trip from Selma to Montgomery were scheduled to spend the night.  Clearing the pasture meant gathering up the cow manure that was everywhere. It was a thankless job, but in the warm Alabama sun, our work went without incident until early in the afternoon when a caravan of cars with gun racks on their roofs and Confederate flags on their doors pulled up.

There was no place to hide, and in this pre-cellphone era, no way to call for help. Scattered over several acres, we were easy targets for anyone with a gun. The men in the cars cursed us for a while over a bullhorn and tried to provoke a fight, but when nobody reacted, they finally got back in their cars and drove away. For those of us clearing the pasture, it was a lesson in the kind of vulnerability anyone who was black faced for trying to register to vote in Alabama. My fear stayed with me for the rest of the afternoon, but when it went away, I was not relieved.  I felt once again how small my role at Selma was.  I could count on being safe the minute I got back on a plane and returned North.

When the 50th anniversary of the Selma march is celebrated this year in Alabama, I’ll make sure to stay in the background if I go, but right now I’m leaning toward staying at home.  I think the money it will cost for me to travel to Selma might better be spent on working for change in the present.

Nicolaus Mills is professor of American studies at Sarah Lawrence College and author of Like a Holy Crusade: Mississippi 1964—The Turning of the Civil Rights Movement in America.