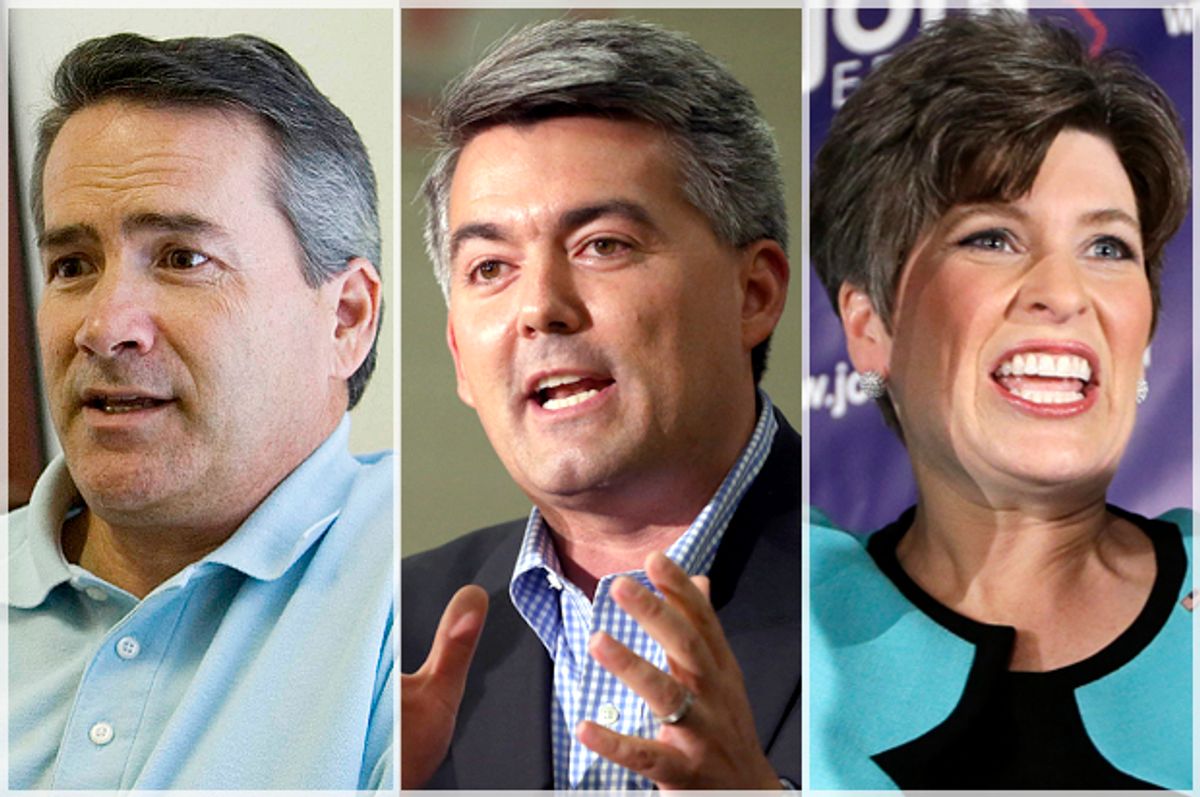 Come next week, a few of Congress' most notorious Tea Partyers will no longer be in office. Rep. Paul Broun, a Georgia Republican who once declared evolution and the Big Bang Theory "lies straight from the pit of hell," lost a U.S. Senate primary this year and won't be returning to the House. Neither will Michele Bachmann, who needs no introduction.

But the departure of such inflammatory conservatives hardly means that the 114th Congress will be a more sober one. Indeed, the crop of Republicans taking power next month is even further to the right than the current House GOP conference. The newly Republican Senate, too, will feature more than its fair share of ultraconservative hard-liners. Today, Salon looks at five of the most extreme Republicans taking power in Washington this month.

What do you call someone who supports arresting federal officials for implementing healthcare reform, champions "personhood" legislation that would ban abortion and some forms of birth control, believes there's a secret elite plot to steal farmers' land, keeps a gun as protection against "the government," and thinks President Obama is a "dictator"?

You call her "Senator" -- as in soon-to-be-Sen. Joni Ernst, the Iowa state lawmaker who defeated congressman Bruce Braley in the race to succeed retiring Democratic Sen. Tom Harkin of Iowa. Polls indicated that most Iowans agreed with Braley's positions on the issues, but in a midterm election that largely focused on the candidates' personalities -- Ernst is charismatic, Braley most definitely is not -- Ernst secured six years in the U.S. Senate.

In Wisconsin's 6th Congressional District, Tom Petri, an establishment Republican who may or may not be seriously ethically challenged, opted not to seek a 19th term in the House this year. When voters in Petri's district replaced him with state legislator Glenn Grothman, it marked a political shift from the right to the far right.

You can't spell "Grothman" without some of the letters you need to spell "troglodyte," and his views on issues like race, gender and LGBT rights make him one of the most incendiary incoming House Republicans. Grothman once said that Martin Luther King Jr. Day shouldn't be a state holiday, and he has opposed equal pay legislation on the grounds that "money is more important for men." Meanwhile, Grothman charges that gay teachers have an agenda to turn their students gay, and he blasted Secretary of State John Kerry for opposing a Ugandan law that imposes 10 years in prison for homosexuality.

"We send scientists to Africa to say how wonderful the homosexual lifestyle is," Grothman said in April. "It is just unbelievable what has become of our country."

The retirement of North Carolina GOP congressman Howard Coble paved the way for the election of Baptist pastor Mark Walker, whose statements on race and immigration range from condescending and cringe-worthy to downright frightening.

Walker once wrote on Facebook that he “had the privilege of spending an hour with an African-American male who grew up in the inner city,” but he lamented that “most of these Americans have no concept of the pride and joy when we, as parents, invest in our children.”

On border security, Walker said at a debate that "we got to go laser or blitz somebody with a couple of fighter jets for a little while to make our point." When the moderator asked whether he worried that this could lead to a war with Mexico, Walker replied, "Well, we did it before. If we need to do it again, I don't have a qualm about it."

As he geared up to challenge Democratic Sen. Mark Udall of Colorado, Rep. Cory Gardner confronted a major problem: on issues like immigration, the 2013 government shutdown, and reproductive rights, he'd taken ultraconservative positions unlikely to play well in a statewide election. So Gardner did what any cynical politician would do; he moderated his rhetoric, pretended he was open to compromise on issues like immigration, and even recanted his support for a state-level personhood amendment. (However, Gardner did continue to support a federal personhood bill, which he disingenuously asserted was nothing more than a statement that he "supports life.")

The centrist Denver Post editorial board bought the act, endorsing Gardner over Udall and assuring readers that Gardner would be a moderate senator. But once Gardner -- whose House voting record placed him to the right of Michele Bachmann and Steve King -- narrowly defeated Udall, he reverted to right-wing form, voting for anti-immigration legislation similar to legislation he had opposed in the campaign. It was almost as if his campaign-season moderation was all a ploy!

Like North Carolina's Walker, Rep.-elect Jody Hice of Georgia is a Baptist preacher with a penchant for unhinged right-wing rhetoric.

The Republican claims that Islam is a "totalitarian" ideology, not a religion, and therefore  “does not deserve First Amendment protection.” Abortion, he says, is “worse than Hitler’s six million Jews or Mussolini’s three hundred thousand." Women can run for office, he'll grant, but only if they first secure their husbands' permission. As BuzzFeed's Andrew Kaczynski wrote, Hice will also likely be "the most anti-gay member of Congress"; Hice has written that "the homosexual movement is destroying America" and he is fond of the ugly shibboleth that gay men aim to recruit youth into their "lifestyle."