Revenge of GOP "knuckleheads": The right keeps up pressure on Boehner on immigration 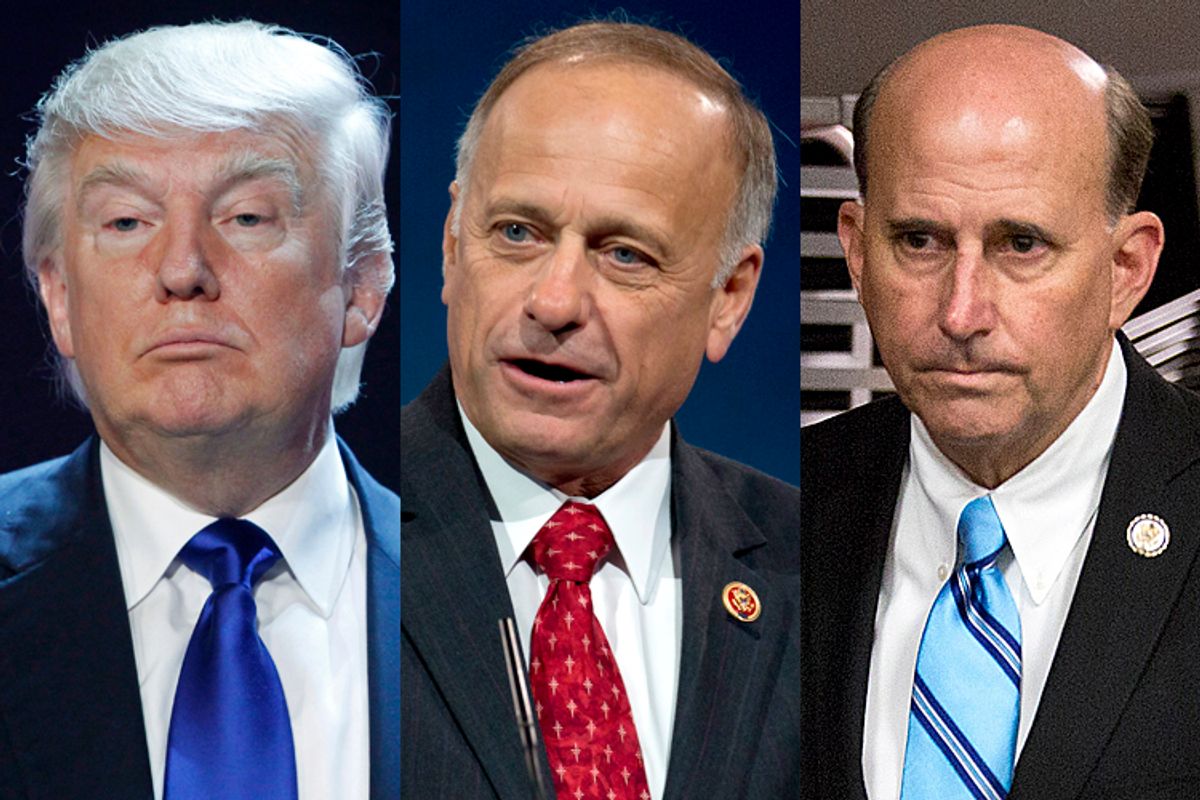 It’s official: Tea Party hero and accomplished sayer of crazy things Rep. Louie Gohmert is running to be the next Speaker of the House. Choosing a setting that perfectly captured the gravity of his announcement, Gohmert piped in to the Sunday morning edition of “Fox & Friends” to break the news of his candidacy. The time for a change in leadership is now, Gohmert explained, and he’s ready to toss his hat – likely some variety of oversized novelty Stetson – into the ring:

Gohmert’s message is simple: John Boehner sucks, so pick me. Or Ted Yoho. Or literally any “adult American citizen” other than John Boehner (Nancy Pelosi excluded). The strategy is to pick off enough GOP defectors to force multiple rounds of voting, which will, somehow, prevent Boehner from eventually prevailing. And then, per Gohmert, the House GOP caucus will rally around whoever it is that isn’t Boehner and make that person the new Speaker. (Boehner, for his part, has allowed that there are "a few knuckleheads" in his conference.)

As you may have surmised, this is extraordinarily unlikely to happen. While Louie Gohmert may win points among conservatives for his willingness to attack immigrants and gays, he lacks any sort of real following. Boehner, on the other hand, is an entrenched figure within the establishment who spent much of the 2014 election cycle raising obscene amounts of money for members of his caucus and literally buying their loyalty.

So while it will almost certainly fail, that doesn’t mean the Gohmert Rebellion is without significance. At its heart is the issue that will do the most to roil the House GOP during the 114th Congress: immigration. Gohmert’s most immediate beef with Boehner was the passage of the “Cromnibus” during last year’s lame-duck session, which funded the government without taking any direct shots at President Obama’s executive actions on deportation relief for undocumented immigrants. To get conservatives to go along with the funding legislation and avert another government shutdown, Boehner agreed to extend funding for Homeland Security only through February, which (in theory) would give the GOP more leverage to take on the president on immigration.

For hardliners like Gohmert, this was insufficient. “You said you’d fight amnesty tooth-and-nail. You didn’t,” Gohmert said on Fox News. “And then you took the only hostage that Obama would like for us to shoot.” Talking to Glenn Beck on the radio, Gohmert said that border security would be his priority as speaker, and he’d defund essentially the entire government “until you [Obama] secure the border.” This message isn’t enough to take down Boehner – as of this moment there are twelve Republicans who’ve publicly stated they’ll vote against Boehner, well short of the 29 needed to deny him a majority – but it’s in line with what many conservatives in the House (and on talk radio) are thinking when it comes to immigration.

By trying to mount a coup against Boehner, the hardliners are sending a reminder to Boehner (and to their various activist and media backers) that they’re still here and still capable of making the establishment’s life difficult, especially on immigration. Among Gohmert’s allies in the anti-Boehner caucus is Rep. Steve King, who successfully forced Boehner into taking a hardline stance during last summer’s border crisis, and who will have his ring kissed by several 2016 Republican hopefuls later this month at his “Iowa Freedom Summit.”

There’s a certain irony to all this conservative anger at Boehner, given that the speaker single-handedly prevented any sort of real immigration reform from happening during the last session of Congress. The Senate’s comprehensive reform bill was effectively DOA in the House, and while Boehner made a number of promises to tackle reform, he never actually did it. Instead he sat on his hands, blamed the president for everything, and then cruised to a crushing electoral victory. You’d think that would be enough to satisfy conservatives, but they’ve gone so far around the bend on immigration that merely being obstructionist isn’t good enough.