Scalise must go, already: Seriously, why does he still have a GOP leadership job?

Reince Priebus said GOP would work hard to win black votes. Instead, it's backing “David Duke without the baggage" 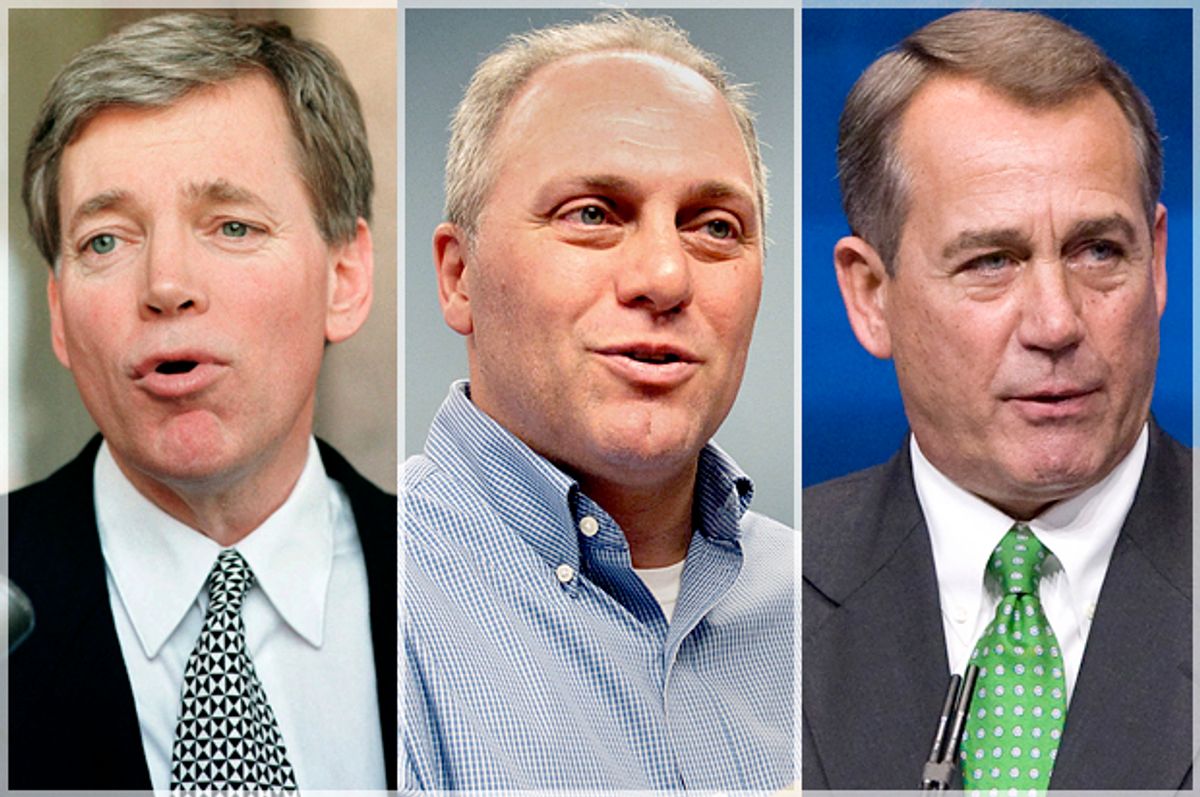 "If we work like dogs day in, day out — instead of getting 6% of black votes across the country ... we can do a lot better,'' Priebus told the group. "That's our goal.''

It turns out he actually used that odd term – “work like dogs” – more than once in pitching his plan to expand black support for the GOP. “If we work like dogs...instead of 5% in the black community, can we get to 9 percent?” he asked NBC’s Chuck Todd. On the whole issue of the GOP’s demographic problems – with young, Latino, Black, gay and single women voters -- Priebus pledged last year: “We’ll work like dogs to try to figure it out.”

Ironically, Republican leaders worked like dogs over the holiday season, but not to win black support. Instead they’re trying to hold on to a leadership role for Louisiana Rep. Steve Scalise, after it came out that he addressed former KKK grand wizard David Duke’s European-American Unity and Rights Organization (EURO), a white nationalist organization, in 2002. House Speaker John Boehner says he wants Scalise to stay as whip, and so does Majority Leader Kevin McCarthy.

Meanwhile, Reince Priebus seems to be working like a dog to avoid commenting on the mess. Oddly, I can’t find any evidence of a statement on Scalise from the normally gabby media hound.

It’s particularly offensive that Scalise, who once pitched himself politically as “David Duke without the baggage,” is replacing the only Jewish member of House Republican leadership, or the House Republican Caucus generally (other than incoming freshman Lee Zeldin), Eric Cantor (h/t Rachel Maddow). Duke told reporters he founded EURO because white Americans were facing “genocide,” and the group’s Web site blamed Jews:

"The Jewish media and Jews in general will attack us for wanting to restore White America,” EURO’s Jeff Davis (what a great name) wrote in 2001. "The Jews are the enemy of the White race, and they are largely responsible for the ‘browning' of America. The Jews want to rule over a multi-racial brown America that is too ignorant to ever rebel against them.”

Scalise has long been associated with his state’s swampy far-right racist factions, no matter how hard he tries to insist he didn’t know Duke’s EURO was a white nationalist group. Many of Duke’s aides and advisors from his 1991 campaign for governor, and his two years in the Louisiana statehouse, are now in the Louisiana GOP mainstream. “Politicians here have still co-opted part of his message without having the same baggage,” Baton Rouge GOP consultant Roy Fletcher told the New York Times last week.

Back in 1999, Scalise himself told reporters that he shared many of Duke’s “conservative” views, but was more electable. “The novelty of David Duke has worn off,” said Scalise. “The voters in this district are smart enough to realize that they need to get behind someone who not only believes in the issues they care about, but also can get elected. Duke has proven that he can’t get elected, and that’s the first and most important thing.”

I’m not sure many people outside the far-right would agree that “the first and most important thing” about David Duke was that “he can’t get elected.” Yet GOP leadership to date has closed ranks around Scalise.

Still, some folks on the right, including Mark Levin and Erick Erickson, have demanded he give up his leadership role. Erickson notes that the same establishment figures who threw Mississippi Tea Party favorite Chris McDaniel “under the bus” because he spoke to the Sons of Confederate Veterans” are lining up behind Scalise.

It’s possible that discontent will spread. Politico’s top story Tuesday morning calls Scalise “damaged goods” who “may be toxic in some GOP circles.” The story quotes mainly anonymous Republican aides and elected officials questioning whether he’ll be able to raise funds for the party, “especially on trips to New York or Los Angeles.” Some senior party figures, Politico writes, “doubt that the corporate chieftains and rich donors who bankroll Republican candidates will give him money to keep campaign coffers filled.”

So Scalise may be in trouble – again, may be -- because he makes top donors anxious, not because he called himself “David Duke without the baggage?” Good to know.

It’s possible Boehner wants to get through his own election as speaker on Tuesday before dispatching Scalise, a move that might increase discontent on his right and peel off a few supporters if he did it now. Or it’s possible this is another case where Republicans think they win with their base by standing up to what they perceive as bullying by liberals, and protecting a guy who thinks the main problem with David Duke is that he was unelectable. We'll see.