The beast has become self-aware: The most meta moments from the “Bachelor” premiere

As one of the contestants puts it: “I’ve spent half my life watching this show, I know the rules.” So do we 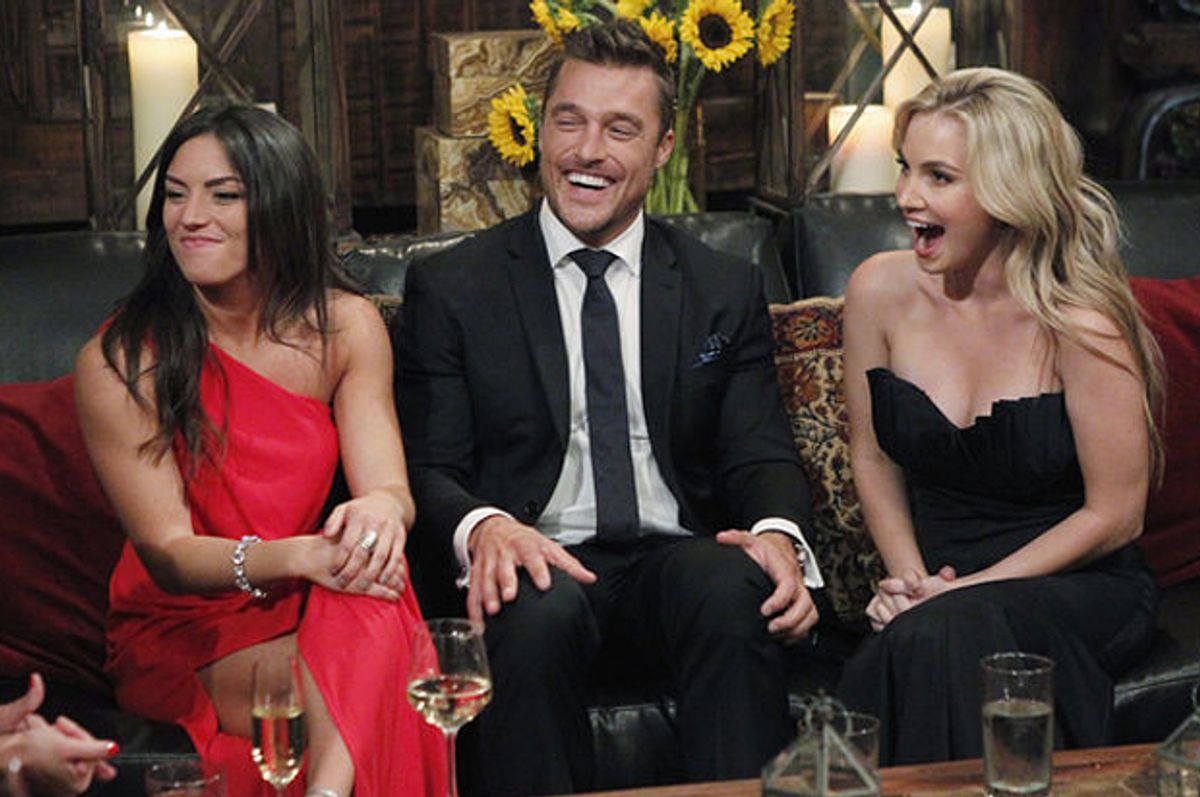 Confession: I haven’t watched "The Bachelor/ette" in almost a decade. I’m not crazy about reality shows, and I was under the impression that the show was little more than a cheesy, white-washed charade bolstered by dismayingly retrograde heteronormative dating standards — a notion I was not exactly disabused of when I tuned in for the three hour(!) season premiere last night. That said, this show is the televisual equivalent of strong cocaine, and as soon as I saw Farmer Chris' chiseled jawline juxtaposed against those sweeping shots of the Iowa corn fields, I was hooked.

As someone who skipped over much of the show’s evolution, I was also interested to see that this both is and isn’t "The Bachelor" I remembered (you know, back when Trista and Ryan got together and I was young and believed love was real?) While the tropes remain the same — the rose ceremony, the various contestant archetypes -- the thing that struck me the most was what a self-aware beast "The Bachelor" has become in the intervening years, and particularly how wise the contestants are about the phenomenon that they're taking part in. Here were some of last night's most meta moments:

The show within the show:
Okay, so this whole premiere format — the ridiculous red carpet with all the show's former couples, the fact that we’re watching the alums watch the new episode as it airs — is just bizarre. This thing with the previous contestants weighing in on the show while it happens is like something out of a "Black Mirror" plot line, as if we could be trapped in that viewing room forever as part of a self-perpetuating cycle of Bachelors watching Bachelorettes watching Bachelors watching Bachelorettes and on and on for all eternity. “I know all the girls from my season know what that feels like,” says past winner Katherine, observing the other contestants getting jealous when Britt gets a kiss. At this point, each season of the show isn’t a standalone narrative so much as prism through which we see all the seasons before it reflected (it certainly makes me want to go back and re-watch that Michelle Money season) and that makes for one weird viewing experience.

The fear of the rose:
I love that the rose has become such a fraught and powerful signifier that its mere arrival is enough to send waves of panic through the room. As contestant Kaitlin puts it: “The second that dreaded friction rose comes in front of her face it’s like... [Does devil horn gesture]." Hey, at least it’s not an onion?

The numbers game:
Reality shows operate on the element of surprise — on the producers tilting the arena while you're in it, à la "Hunger Games" — and yet at this point, the contestants know how the game is played so well that it’s comical to watch them fret and fuss when only 15 women show up initially instead of the expected 25. I particularly enjoyed hearing the women anxiously speculating over the missing women by recalling pasts seasons, like they were citing footnotes on a term paper. “It's always 25,” one contestant confirms authoritatively. “Typically in the first night, what, 7-10 go home?" another ventures. There was also this great exchange:

The fandom:
Speaking of that Juan Pablo shoutout — It’s pretty crazy that we’re at the point where the contestants don't just have one or two season's worth of familiarity, but have literally grown up watching this bizarre ritual play out on TV every year since they were kids. As crazy-intense Ashley says, “I’ve spent half my life watching this show. I know the rules.” This sort of advanced literacy adds a whole new dimension to the game (and a slightly terrifying one at that).

The increasingly self-aware contestants:
If earlier seasons could still tease the facade of an authentic romantic experience, at this point, everyone knows how weird it is that they’re looking for love on "The Bachelor," and have to justify their involvement with constant comments to that effect. As instant front-runner Britt says self-effacingly about her chemistry with Chris: "Something real is going on amidst all this chaos...I actually really like you." We'll see, bud. I also applaud Amanda's answer as to why she's still single: “Because I’m crazy.” Honestly, I think the fewer illusions we have going into this experience the better (self included). See you guys next week.