Yes, Jerry Jones compared him to Mandela. The real problem is that he abandoned his home teams because they "stunk" 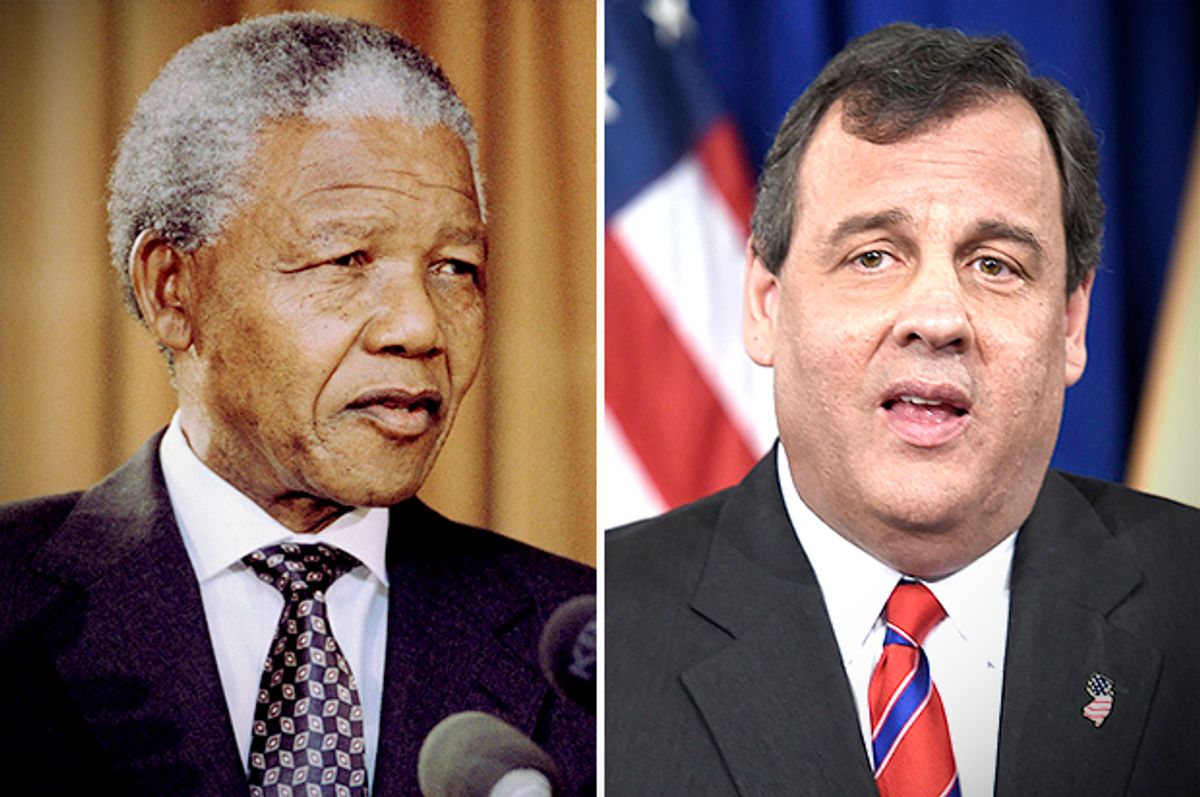 I’m not part of Gov. Chris Christie’s fan base, so I’m sure he doesn’t care what I think about the nagging controversy over his longtime love of the Dallas Cowboys. But as a sports fan I have to say: This could actually harm whatever tiny hopes he had of winning the presidency.

On Wednesday night Dallas Cowboys owner Jerry Jones made it all so much worse by telling Dallas reporters that having Christie in his owner's suite was reminiscent of hosting Nelson Mandela. Really.

We want him there. We’ve had him in the locker room. It feels good to have him here. We do need all hands on deck to even come close to these Packers. If he’s got enough mojo to pull this thing off for this Cowboys team this year, I’m for him being the President of the United States.

That’s when Jones compared Christie to other godlike figures who’ve graced the Cowboys with their presence:

I know Nelson Mandela, I got to sit with him, and took him to the dressing room, and you can imagine how the players went crazy and coaches, just to meet Nelson Mandela.

I know I’m supposed to say the real issue here is Christie’s coziness with Jones, whose company, Legends Hospitality, received a lucrative Port Authority contract. Christie took Cowboys tickets and plane fare from someone doing business with New Jersey. That may be illegal. Local and national media outlets are piling on, and so is his potential 2016 rival, Scott Walker.

And that’s very serious. Now Jones has made Christie a laughingstock by comparing him to South African liberator Nelson Mandela.

I have to point out, though, that the first disqualifying issue I spotted in this clusterf*ck of male ego was Christie’s explanation for why he supported the Cowboys: because all his home teams “stunk” when he was a kid.

Personally, I think Americans are entitled to support whatever sports team they want. But it’s incredibly creepy that Christie himself says he became a Cowboys fan because his hometown teams “pretty much stunk” when he was growing up. The local New York Giants and Jets, as well as the Philadelphia Eagles (New Jersey is split that way), were indeed win-challenged during Christie’s wonder years. But the governor also confided that he didn’t even join his beloved father’s fandom because, again, his dad’s team, the Giants, “pretty much stunk.”

I was a big fan when I was your age. I was a big fan of Roger Staubach, who was the quarterback for the Cowboys back then. The Giants and the Jets pretty much stunk when I was a kid and my father was a Giants fan. I used to remember watching him when I was eight, nine years old and every Sunday he would watch the Giants and yell at the TV set. I used to think to myself, 'Why would I want to root for a team that makes you angry?’

Let’s remember that Christie is the angriest man in high-level American politics. So by rights he should have been the Giants' No. 1 fan.

I don’t have a problem with the fact that Christie didn’t root for his father’s team. I didn’t either, but for the opposite reason. I’m a baseball fan, and I didn’t root for my father’s Yankees. But that was because the Yankees were the dominant team in my childhood, and my mother and grandmother rooted for the New York Mets. While I loved my father, I believed the Mets needed my attention more, because they were the underdogs.

Christie doesn’t have to share my sympathy for the underdog – and obviously he doesn’t, he’s a fan of overdogs. But to turn away not only from his father’s beloved team, but all of his local teams (he hates the Philadelphia Eagles particularly) is one of the most vivid examples of Christie’s grasping, kissing-up character. In particular, by rooting for the dominant Cowboys as a child, Christie showed us early that he was going to be the governor (though never president) for the 1 percent.

I’m on record long ago saying Christie won’t be president, first because of his anger issues and later because of his lame Bridgegate problems. This is strike three. His entire political career is built on his Springsteen-loving, frank-talking Regular Joe appeal. Bruce Springsteen doesn’t root for the Dallas Cowboys. Plus, Americans root, root, root for the home team (yes, I know that’s baseball, but still), and Christie’s embrace of a faraway team, just because they were winners, is frankly un-American.

Oh, and that whole Jerry Jones thing is pretty awful too. There’s at least one major difference between Christie and Nelson Mandela: Nelson Mandela was elected his country’s president. Christie will not be.