GOP's coming horror show: Why new Congress may be even worse than you think

Get the popcorn ready. GOP House on GOP Senate action -- and why the establishment is really so worried 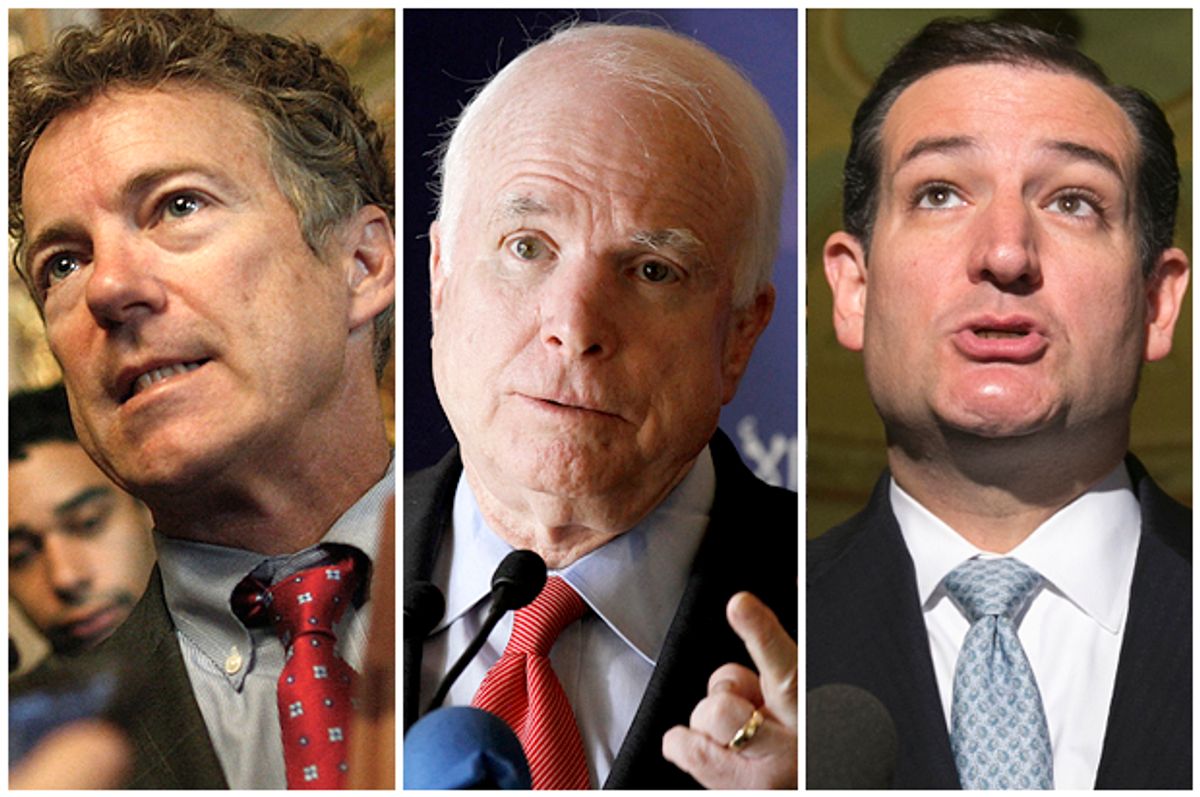 If there is one thing on which I wish I'd laid a bet over the past few years it's that despite their successful strategy to make the economic recovery as weak as possible, the minute it started to substantially improve, the conservatives would be standing at the head of the line taking credit for it. It was as predictable as the sun coming up tomorrow that they would claim their obstructive tactics resulted in Morning in America. After all, it just rewarded them with a Republican majority in the Senate and enlarged their majority in the House so they must be on the right track, right?

Still, the Beltway wags insist that the new class of Republicans are the grown-ups who are coming to town determined to prove they can "govern." What they mean by governance is a little vague but is generally assumed to require bipartisan comity and the president happily throwing back some Merlot (and possibly sharing a few puffs on a Marlboro) with John Boehner at the end of a tough day. And it means passing "meaningful legislation" in which both parties are proud and happy to hold hands and do the tough business that Americans all allegedly sent them to Washington to do. The Washington Post put it this way:

The incoming Senate majority leader has set a political goal for the next two years of overseeing a functioning, reasonable majority on Capitol Hill that scores some measured conservative wins, particularly against environmental regulations, but probably not big victories such as a full repeal of the health-care law.

It's not quite as stirring a cri de guerre as his 2010 proclamation that the GOP Senate's primary responsibility was to make Barack Obama a one term president, but it amounts to the same thing. As Paul Waldman puts it in this insightful piece in the American Prospect, "He devised and implemented the strategy of total obstruction in the first six years of the Obama presidency not because he couldn't stand the president, but because he thought (correctly) that it would be the strategy most likely to get Republicans what they wanted." Waldman points out that while they didn't deny Obama a second term (which was always a long shot) they managed to win a congressional majority and enact huge, painful spending cuts, a success by any measure. Now he's looking to the next goal: a GOP president. And he recognizes that they have to keep the "wacko-bird" caucus, as John McCain likes to call them, contained. I'm afraid that's unlikely. Laura Ingraham signaled the likely reality when she told the Fox News audience this past weekend:

You see, the right wing (or, if you prefer, the Tea Partyers) believe that being "scary" was the tactic that got them where they are today. While they may share the same goal as Mitch McConnell, they don't see their path to a conservative trifecta in the same light. In their minds, happy days are here again because the wacko-birds screeched loudly and flapped their scary wings until the Democrats went into hiding. And they believe the American people rewarded them for their aggression. Where this leaves us is unknown as yet but congressional budget expert Stan Collender offered up some possibilities as to how the inevitable budget battles are going to shape up. He wisely notes something that virtually none of the Beltway pundits seem to have grasped: the new House majority is a lot more conservative than the old one. And unfortunately for Mitch McConnell, that's a problem. As Collender writes:

24 of the 34 senators up for reelection in 2016 will be Republicans, many of them will be from blue states and some will have political problems voting for the changes in Medicare, Medicaid, Social Security and Food Stamps the House GOP will likely include in its proposed budget resolution. It’s not at all clear whether the House will agree to the more moderate proposals the GOP Senate majority is likely to offer in response. For that matter, it’s not clear that tea party Republican senators will agree to them either.

So, the real battle of the budget may just be between the House and the Senate Republicans with Democrats reduced to popping popcorn and settling in like they're watching a live version of "Transformers: Age of Extinction." This could be the entertainment event of the season. Collender also notes that the idea of the Republican caucus lowering itself to work with the White House on budget matters is hardly a slam dunk. Ingraham probably speaks for many of them with her comments when she says if it ain't broke don't fix it. And then there are the various procedural and technical changes they are contemplating such as hiring a partisan parliamentarian and CBO head to rig the system and fix the numbers. Who knows if these corrupt practices will work or if they'll backfire? But in either case, they cannot be seen as good-faith efforts at "grown-up" governance.

However, as McConnell said in the quote above, there are some points of potential bipartisan accord. He didn't bring it up directly, but the Trans Pacific Partnership agreement has support from corporate politicians of both parties as does the Keystone Pipeline (although the president now is signaling he'd veto it). Rolling back more of the Wall Street reforms under Dodd-Frank is a bipartisan dream that McConnell would surely love to take credit for advancing. And it's still unknown where the White House will come down on those issues so they could all feasibly be guzzling some celebratory Merlot fairly soon if they can get that done.

But McConnell shouldn't get his hopes up about that either. There is a possibility of another bipartisan coalition forming around those issues: the progressive left and the Tea Party right could join forces to stop those measures. And I'd have to guess that is the scariest prospect facing the leadership of both parties and the Beltway establishment too. If the right and left join forces against the status quo, we could see some real fireworks --- and possibly a realigning of priorities going into the presidential race. After all, legislative coalitions don't have to believe in the same things. In fact they rarely do. But they can always work together to defeat a common enemy.

We know that the progressive Democrats would be happy to see Speaker Boehner and Majority Leader McConnell take a hit. And from the looks of it, quite a few members of the GOP agree with them. The right is as suspicious of these secretive back room deals as the left. It's impossible to know if there are enough members of both parties with a more populist approach to trade deals, bailouts and coddling Wall Street to thwart the corporate consensus, but it will be interesting to see it play out.

My advice? Buy popcorn futures. Whatever happens, it's going to be quite a show. The only question is whether it's an adult drama, a horror movie or a farce. Let's just say that the adult dramas aren't faring so well at the box office these days so I wouldn't get my hopes up about the first one.