The hilarious bougieness of "MasterChef Jr.": Why this season should show us more parents 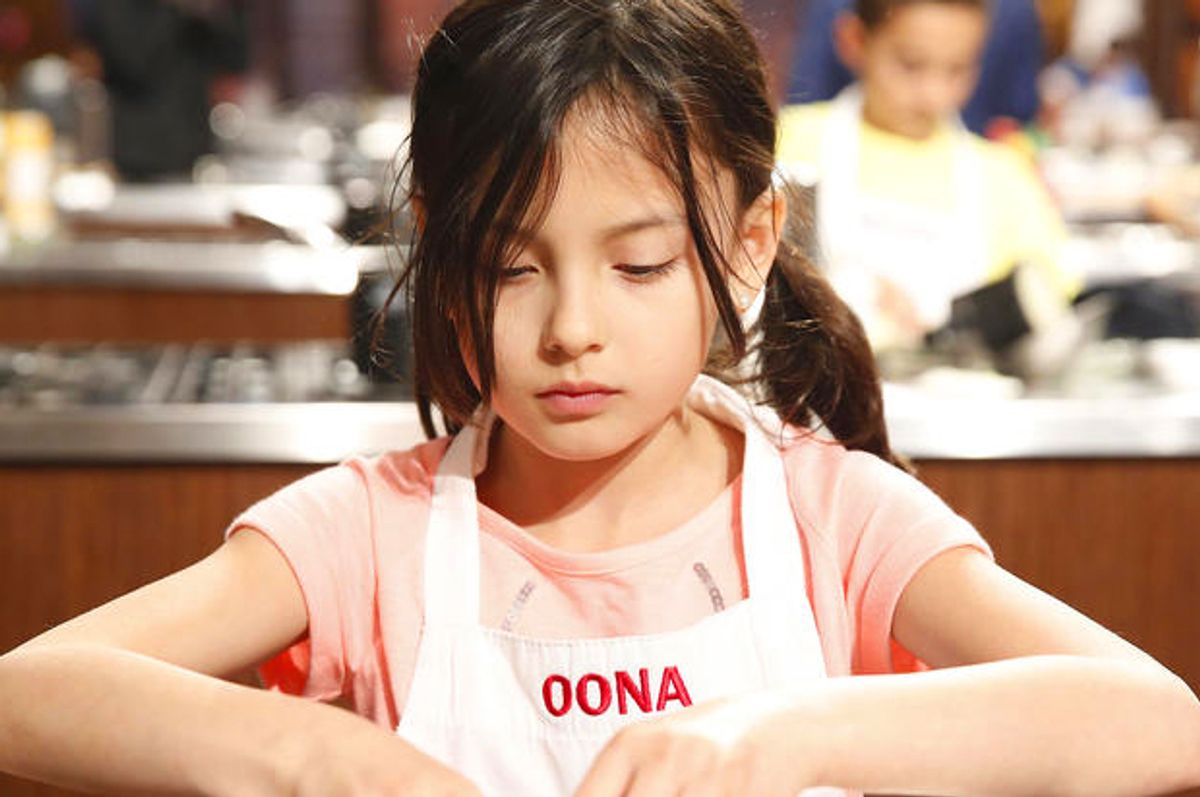 Yesterday, The New York Times’ Jon Caramanica ran a piece comparing "MasterChef Jr.", Gordon Ramsay’s cooking competition show about 8-12 year old culinary whizzes, with another show focusing on child prodigies: Lifetime’s “Child Genius,” a collaboration with Mensa about kids preparing for a national intelligence competition. Caramanica contrasts the approaches of the two shows, writing: “While children’s tears are the uncomfortable-to-watch byproduct of “MasterChef Junior,” “Child Genius” relies on an even more troubling byproduct: parental sweat.” Caramanica leans towards "MasterChef"’s approach, which glorifies the creativity and pluck of exceptional youngsters instead of once again playing into society’s sick fascination with helicopter parenting. But watching last night’s tepid "MasterChef Jr." season three premiere, I found myself longing for the drama and frisson that an injection of parental energy would reliably provide.

The fact is, there’s a reason that most reality shows devote serious airtime to scrutinizing contestants’ histories. Very often, this backstory is the meat and potatoes — or shall we say, filet and fingerlings — of the show. Even the more impersonal reality competition shows make sure to illuminate where the contestants came from, the various psychological defects that prompted them to abandon normal life and flock to receive verbal abuse in the shimmering test kitchens and sound stages of SoCal. Biography and backstory makes us care about the stakes of the contest and appreciate the sociological conditions that breed different sorts of personalities.

"MasterChef Jr", meanwhile, occurs largely in a vacuum, and we usually only get a glimpse of the parents as they come to cheer their kids on in the final episode. Sure, it’s partly because the contestants are kids and there are concerns about privacy or being exploitative, not to mention that 8 to 12 year olds pretty sparse bios to recount, but it feels downright weird to have no sense of how 12-year-old Logan, who is fond of cooking with liquid nitrogen, or 8-year-old Oona, who has wanted to make a chicken liver pâté since she was 6, honed their chops. "MasterChef Jr." works so well because it’s constantly confounding to see these kids cook way beyond their age level, and that in turn makes us curious to see the delightful wackos that raised them. Our fascination with exceptional individuals is inextricable from our fascination with the conditions that breed exceptionalism.

Which is to say: What parents give their 12-year-olds sushi knives to cut with, opt for Michelin Star restaurants over Dave and Busters, or throws words like "fricassée" and "gratin" in with vocabulary drills? Bougie parents, of course. Sweet little Logan wears a BOW TIE, for god's stake. Meeting the parents would complete the picture of where these little prodigies came from and why they grew up brûléeing pears instead of playing Nintendo or digging for worms. Even a brief flashback of the kids, say, baking with whatever adult taught them to cook or eating at their favorite restaurant, would do a lot to complete the picture. And also help to eliminate any illusion that this is some kind of foodie free-for-all wherein kids from all walks of life unite with the shared goal of searing flawless ahi tuna.

One of the most interesting pieces about "MasterChef Jr." was Emily Fleishaker’s Buzzfeed feature, wherein she visits season 1's Hawaiian-shirt-aficionado Jack at home and gives us a glimpse of his life behind the scenes, while providing independent verification of his culinary abilities in turn. Here, we see Jack roasting butternut squash and searing steak in the kitchen of "his neighbor's beautiful, two-story home in Far Rockaway" (his own house is under construction) and learn about some of his non-culinary hobbies (tennis, piano, trombone). Repeatedly, the most interesting bits of the show for me have been when the veil gets lifted a little bit, like when Logan confesses his dad is a Republican politician (bowtie makes sense now), or when we learn that Oona’s father is a Yale law professor. These details help us to contextualize the sort of environment that produces a "MasterChef Jr." over, you know, a regular kid who has never considered that Sriracha might taste good whipped into a foam.

It’s also not an irrelevant point that the breeding ground for these culinary prodigies appears largely to be affluent suburbia; I think it's safe to say that none of these whippersnappers are on the (French) breadline. Of course just cause you have resources doesn't mean you can cook, and "MasterChef Jr." is commendable because it rewards singular talent and effort — but there’s also huge and notable difference between a kid who lives on the Upper East Side and dines regularly at Le Bernadin vs. one who honed her chops by rolling pie dough in her grandpop's roadside diner (I sense that few of the latter have made it to "MasterChef Jr.", but maybe next season).

The point being: These kids are amazing, but that’s partly because they come from interesting test kitchens, and sometimes I wish "MasterChef Jr." would appeal to some of reality TV’s baser instincts and let us peek behind the curtain. Or at least just give Oona her own show, for crying out loud.