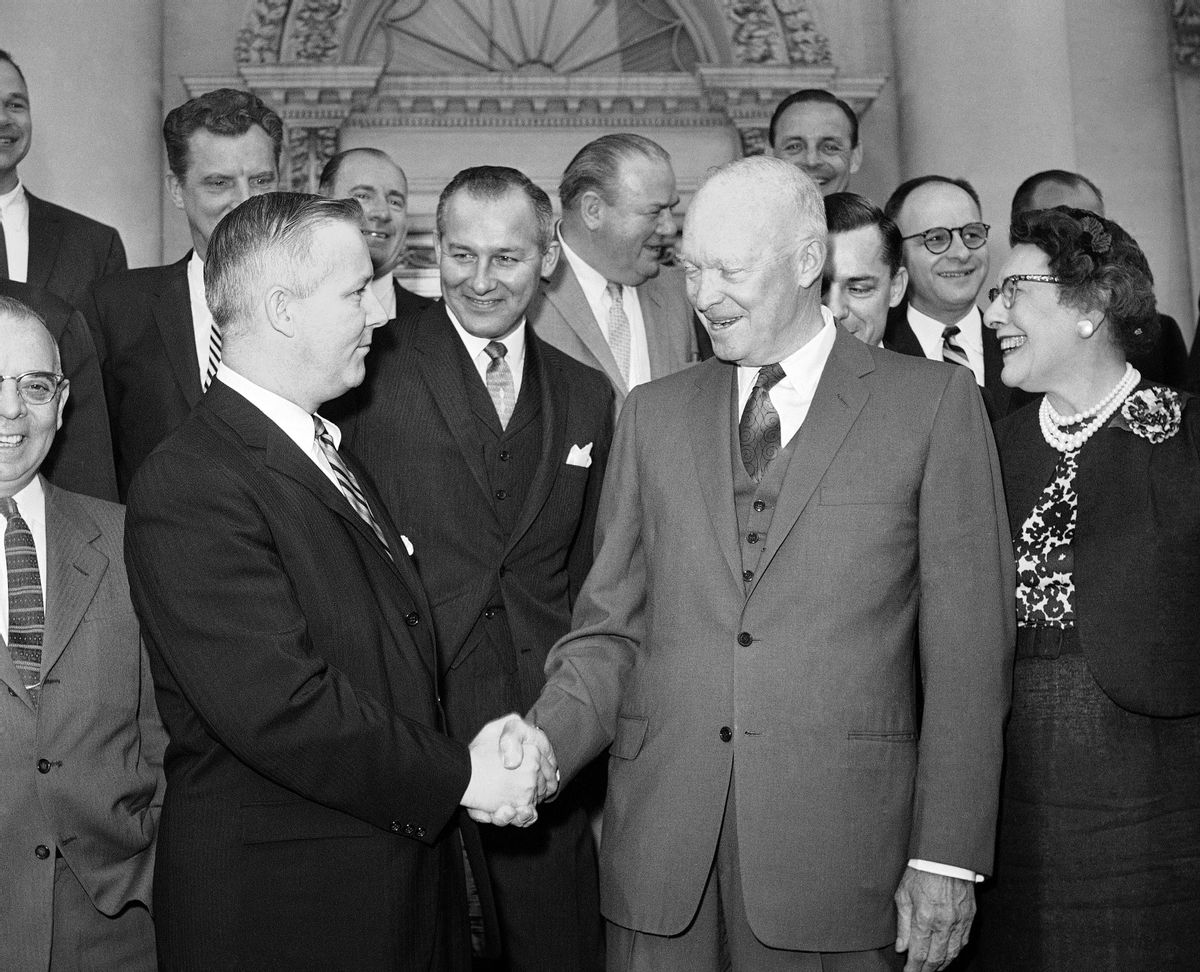 FILE - In this May 12, 1960, file photo, President Dwight Eisenhower, front right, shakes hands with Rep. Arch Moore, of West Virginia, as he poses with a group of Republican congressmen after breakfast at the White House, in Washington. Moore, whose guilty pleas to federal corruption charges overshadowed his record as his era's most successful Republican in Democrat-dominated West Virginia, died Wednesday, Jan. 7, 2015. He was 91. (AP Photo/Bill Allen, File) (AP)
--

But his successes were also deeply tainted by his guilty plea to federal corruption charges.

The three-term governor, congressman, state legislator died Wednesday evening in Charleston "with his family by his side," according to a news release from daughter U.S. Sen. Shelley Moore Capito, R-W.Va.

"Dad loved the state of West Virginia as if it were a member of our family," the release said. "Serving West Virginians was at the core of his very being and he cherished every moment of it."

Gov. Earl Ray Tomblin issued a statement late Wednesday in which he called Moore "a towering figure in West Virginia who during his three terms worked with both Democrats and Republicans to accomplish many things to help move our state forward."

Moore acted as an unofficial adviser to Capito and also said he did financial and government consulting in his later years. He had attempted to regain his law license, which he lost upon his criminal convictions, but was rebuffed in a unanimous 2003 state Supreme Court ruling.

That decision reflected the political limbo in which Moore placed himself by pleading guilty to five corruption-related felonies and then repeatedly trying to withdraw those pleas while arguing that he was innocent.

Despite misconduct that showed "shocking disregard" for "the public trust and for the standards of the legal profession," the disgraced Moore pursued a "continued denial of wrongdoing," the justices wrote.

Moore "has had an ample opportunity to come to a realization that his conduct was wrong, and to take steps to demonstrate that realization," the opinion said. "Despite the passage of time and the petitioner's record since his disbarment, the record strongly suggests that there has been little change in the underlying attitudes and perceptions that directly led to the misconduct for which he was disbarred."

The Glen Dale native was born into a family with GOP ties. A grandfather had been a mayor of Moundsville, while an uncle had been minority leader in the House of Delegates. Moore attended Marshall County schools before entering the Army during World War II. He rose to the rank of sergeant, and was awarded the Bronze Star as well as a Purple Heart after being shot and severely wounded in the European theater.

After the war, Moore attended college and became a lawyer in 1951. He entered politics the following year, winning a seat in the House of Delegates.

Moore then set his sights on Congress. After losing a 1954 bid, the Marshall County Republican narrowly won the state's 1st District seat. He remained in the House of Representatives for six terms, surviving redistricting and winning re-election by ever-increasing margins despite the Democrats' voter dominance.

"In my party, nothing is a cake walk," Moore was quoted as saying in John Morgan's 1980 biographical study of West Virginia governors. "The problem is always one of numbers. I always swim upstream. It's the only position I've known in my political life."

But he also possessed personal charisma, strong oratory gifts and an uncanny ability to recall names. In 1968, Moore defeated once and future Gov. Cecil Underwood for the GOP gubernatorial nomination after a bitter primary battle. Following a similarly combative race, he bested Democratic nominee Jim Sprouse by fewer than 13,000 votes.

Moore's first term as governor coincided with two developments that greatly changed the office's role in West Virginia: the Modern Budget Amendment, which authorized the governor to estimate revenues and propose spending; and another constitutional change allowing an incumbent to seek a consecutive term.

The latter helped Moore become the state's first governor since the late 1800s to succeed himself, winning re-election over now-retired U.S. Sen. Jay Rockefeller. Capito, who served seven terms in the U.S. House, was elected to Rockefeller's seat in November.

Though barred by a Supreme Court ruling from seeking another consecutive term in 1976, he landed a third term in 1984 after an unsuccessful run against then-Governor Rockefeller in 1980. He also had a losing run for the U.S. Senate in 1978.

But his tenure was also marked by the 1972 Buffalo Creek disaster. The collapse of a coal waste dam triggered a flood that killed 125 people, injured 1,100 and wiped out entire communities in Logan County. Days before leaving office in his second term, Moore settled the state's $100 million lawsuit against dam owner Pittston Coal Co. for $1 million.

Corruption allegations had dogged Moore since his first term. In 1975, he became the state's first sitting governor to be charged with a crime when a federal grand jury indicted him and his 1972 campaign manager on extortion charges. They were found not guilty after a trial the following year.

Moore was indicted again on federal corruption-related charges in 1990, two years after losing his bid for a fourth term as governor. He pleaded guilty the following month to five felonies: extortion, obstruction of justice, mail fraud, and two counts of filing false income-tax returns. Moore spent 33 months in federal confinement.

After his conviction, Moore petitioned to take back his guilty pleas. He alleged they were part of a gambit, which he blamed on his defense lawyer, to gain more information about the prosecution's case. The state, meanwhile, sued Moore over his misconduct in office. He settled in 1996 for $750,000 without admitting fault.

Moore's wife, Shelley Riley Moore, died in September at the age of 88. In addition to Capito, Arch Moore is survived by daughter Lucy Moore Durbin and son Arch A. Moore III.