“Girls'" tortured coming-of-age: Why it's so hard for these characters to grow up

In some ways, the new seasons of HBO's "Girls" and "Looking" are more about the parents than the 20-somethings 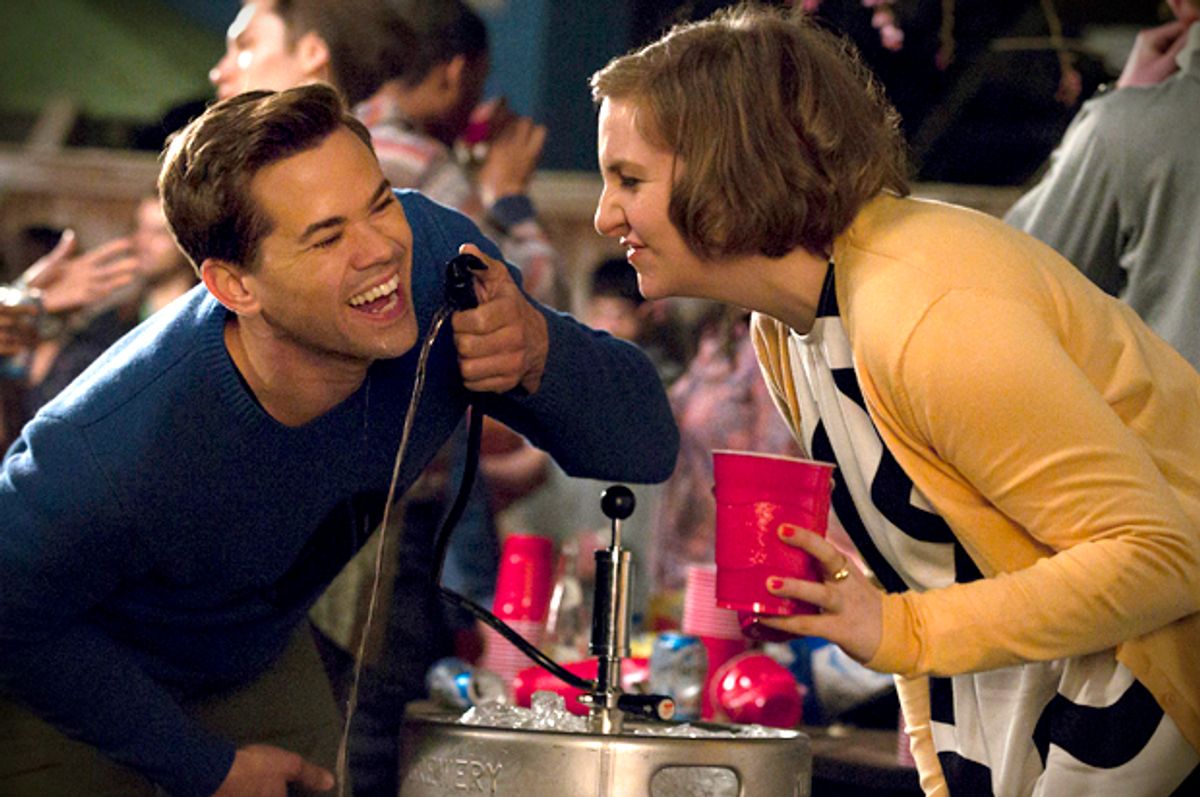 A theory: HBO’s programming is aimed at worried parents. Well, probably not “Game of Thrones”—at least, I hope not. But Sunday nights through March, HBO is offering up half-hour shows about young people making attempts to grow up, in cities where a hip youth culture has found a toehold and thrived. One is brand-new—“Togetherness,” which I’ll be reviewing this weekend. The other two are the returning original series “Girls” and “Looking,” both of which are bent on exposing the framework of their respective subcultures, to shed light on the inner workings of newly minted adults.

“Girls" returns Sunday night for its fourth-season premiere. In the third-season finale, Hannah decided to go to the prestigious creative writing program at the University of Iowa; in Sunday’s premiere, she moves out of her New York City apartment, taking her emotional baggage with her. It’s an episode without much action at all—though Marnie sings at her “first jazz brunch,” so there’s that—and the emotional stakes of the story rest in Hannah’s dynamic with her boyfriend Adam, which is one of the least interesting relationships in the show. Hannah’s journey throughout “Girls,” and Lena Dunham’s, as the creative force behind “Girls,” has been defined by storytelling around Hannah and Adam—which often flattens the narrative from an incisive and distinctive dramedy to a sentimental romantic comedy. (The Season 2 finale is the worst offender in this department.)

But to be fair, the reason “Girls” has focused on Hannah’s relationship with Adam is because apart from their dynamic, there’s not much of a story holding the show together. Dunham's core interest is in investigating how Hannah and her friends grow up—revealing itself mostly in small moments that can be unforgettable, like Hannah bringing a cupcake into the bath with her, or Shoshanna’s “crackcident” at a Bushwick loft party. The story arc leading Hannah and Adam toward each other and then away from each other has always felt strained, despite the actors’ relative talents, because it has always been beside the point.

It’s led to a fourth season that, while competent, also feels somewhat beside the point. Those strong moments can only take you so far. Hannah, Marnie, Shosh and Jessa are all still continuing to figure out their lives, but the last three years of storytelling has indicated these are four women in a bubble of their own making, self-absorbed and often mean-spirited, too. The fourth season continues to offer evidence in that direction, but who even cares anymore? This season the characters are making a concerted effort to change, but the show itself: not so much. (This show has been subject to endless discussion about diversity and demographics. Based on the five episodes I’ve seen, it’s learned pretty much nothing. Without giving too much away: “Girls” courageously explores the problem of brutal policing in New York by arresting two white people; it films a shot at the intersection of Clinton and Washington Avenues in Bedford-Stuyvesant populated entirely by white extras.)

Indeed, much of this season of “Girls” (as the HBO promos indicate) is about Hannah coming into contact with her critics for the first time. Dunham’s Hannah writes a story about a girl named Anna who is, surprise, a great deal like herself. And in Dunham’s show, her classmates mouth the critiques that have been lobbed at Dunham herself. It’s breathtakingly provocative, perhaps because Hannah’s conclusion, time and time again, is something along the lines of, It’s not that I’m doing something wrong, it’s just that you don’t get it.

Which definitely sounds childish, doesn’t it? Good; it’s intentional. The parents in “Girls” are constantly foregrounded into the story in a way other shows about 20-somethings don’t bother with; “Friends” and “Sex and the City” would have been very different if Monica’s or Carrie’s parents were both present in the pilot. The fourth season premiere introduces Shoshanna’s parents (played pitch-perfect, by Anthony Edwards and Ana Gasteyer), meaning that now, every girl in “Girls” has had her parents show up for at least a scene. “Iowa” has two-and-a-half sets of parents: Hannah’s, Shosh’s, and Rita Wilson, playing Marnie’s proud mom. And that’s on top of the real-life parents of “Girls,” who -- for the media, at least -- loom large in the foreground: most notably, Allison Williams’ father, Brian Williams, the “NBC Nightly News” anchor, and Zosia Mamet’s father, David Mamet, the Pulitzer Prize-winning playwright. This is a show about youth that still has an umbilical cord, with an attitude of acting-out that both rebels against and angles for attention.

It's interesting, in light of this, to compare “Girls” to its sister show, “Looking.” The San Francisco-based show is less provocative and more measured, but it’s structurally almost identical to “Girls.” The emphasis is still on growing up, on exploring a subculture, on privileging moments over story. The main difference is that “Looking” feels a lot more lived-in. The direction — shepherded by showrunner Andrew Haigh — finds its way into each character’s reality, even if they are deluded, ignorant or shitfaced. The result is a show that is lushly intimate, the second season building on the foundation of the previous. And whereas the relationship that defines “Girls” becomes less and less interesting, the relationship that defines “Looking” — between Jonathan Groff’s Patrick and Raul Castillo’s Richie — seizes the viewer as if by force.

The only parent who has entered the domain of “Looking” so far is Patrick’s mother, who showed up in a Season 1 episode to articulate all the self-doubt and class condescension that Patrick has unwittingly absorbed. She then retreated, once again, into his (and the audience’s) subconscious, to fester and turn up in arguments as a bargaining chip. As he explains to Richie and his friends, his relationship with his parents has been distant ever since he’s come out: They don’t ask, he doesn’t tell.

His friends are all in the same boat. Some of it could be chalked up to personality: Agustin and Dom make no mention of their families. It could also be because historically, gay people often don’t have much of a family to speak of, once they’ve come out. In the middle of the upcoming second season, though, Richie finds himself circling the issue of confronting his father, whom he’s been estranged from for years, despite living in the same city. Ironically (and without giving too much away), he ends up discussing it with Patrick; Patrick, who broke it off with him at the end of Season 1 because he felt, on some level, that he could not introduce a man like Richie to his mother.

As with much of “Looking,” it’s an emotionally charged conversation, both sweet and tragic and almost poetic. Here are these two guys who are not what their parents expected them to be, and they are trying to make some sense of their lives. They’re drinking Mexican Coke in the middle of the day, in a far-flung neighborhood in the Bay Area without a fashionable name. And both their parents are present in the conversation — without ever showing up. It is a little less star-studded than the helicopter-parenting that shows up in “Girls,” but it feels infinitely more grown-up.