From Lupita's glasses to the Cosby zingers: The best moments of the Golden Globes

For those who missed the shvitzy three-hour telecast, we've got you covered 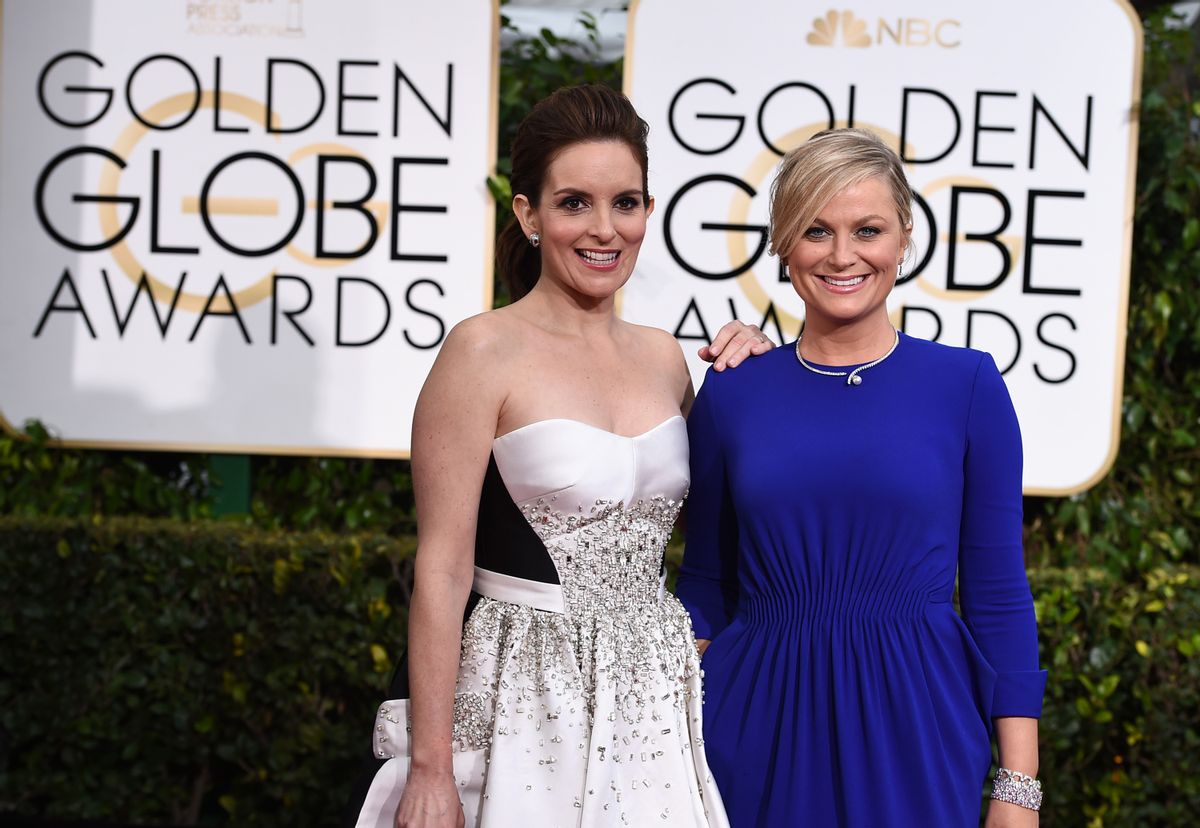 Tina and Amy were back to host the Golden Globes again this year, and as usual, the ceremony was a mixed bag. Along with some enjoyable gags, heartfelt speeches and well-deserved underdog victories, there was also a terrible North Korea bit, a tasteless one-man rendition of ‘We Saw Your Boobs’ courtesy of Jeremy Renner, and way too many bad spray tans. Why dwell on the negatives, though? For those who missed the shvitzy three-hour telecast — and we totally understand if you had better things to do! — here are the highlights from the HFPA’s big shindig:

Tina and Amy’s game of 'Would You Rather'
The heart of Tina and Amy’s charm is their real-life BFF camaraderie, and this sort of goofy sleepover-party-banter is the exact sort of gag that allows them to shine (our personal favorite: Alejandro Iñárritu, "one take, two hours, no stopping," vs. Richard Linklater, "five minutes, once a year.") Plus, it’s a nice change to see men getting harmlessly objectified at an awards ceremony for once (and at least they didn't decide to, like, spin Channing Tatum round on a pedestal or anything).

Ragging on Julia Louis-Dreyfus
Tina and Amy didn’t devote as much airtime to ripping on JLD as usual, but Tina’s one-line callback— ”Julia Louis Dreyfus is here, because she’s OBSESSED with me” -- was a note-perfect zinger. It's always fun to see Tina channeling Regina George.

Cosby jokes
Tina and Amy promised Cosby jokes would not be off limits, and their treatment of the sensitive subject hit found the sweet spot: risqué, without being tasteless.

"Transparent""’s cleanup
It was wonderful to see Amazon’s groundbreaking original series, about a trans woman played by Jeffrey Tambor, get some well-deserved mainstream recognition, and Tambor’s emotional speech dedicating his award to the trans community struck the perfect note. Maura Pfefferman FTW!

Gina Rodriguez’s heartwarming speech
Another glorious underdog victory, Gina Rodriguez’s tearful acceptance speech for her performance in CW’s "Jane the Virgin"was possibly the most emotional high-point of the night. While some of the old-hats can be  pretty blasé about the Globes, it’s profoundly moving when get to see how much the award means to someone. "This award is so much more than myself. It represents a culture that wants to see themselves as heroes," Rodriguez said. "My father used to tell me to say every morning today's going to be a great day, I can and I will. Well dad, today's a great day. I can, and I did.”

Prince's mere presence
Prince simply showing up would have been a high point, but it also prompted the creation of this beauty, which is well worth the price of admission:

Michael Keaton’s well-warned comeback
Comeback kid Michael Keaton accepted his well-deserved win for Best Actor with a retrospective on his tough upbringing and a tearful tribute to his son, before he went backstage, sprouted wings and flew away (we assume). The speech may have gotten a bit awkward at times, but to be fair, the guy hasn't been on an awards stage for way too long.

Kristen Wiig and Bill Hader's host-worthy chemistry
If the HFPA is looking for hosts to fill Amy and Tina’s shoes next year, they should probably call up these two. Their presentation of best screenplay had an enjoyable riff on memorable lines from films (“Excuse me, which way is the Beverly Center?” is our favorite “Terminatior” line too) and they have the perfect mix of friends-in-real-life camaraderie, improvisational chops and onstage ease to make them perfect candidates for Globes 2016.

Maggie Gyllenhaal's bold feminist statement
Class act Maggie Gyllenhaal accepted her award for The Honorable Woman by lauding roles not for powerful women, but roles for actual women, and went on to thank some of the wonderfully complicated women in her life. Maywe all be as graceful as Maggie Gyllenhaal.

Ricky Gervais ragging on Hollywood
Gervais may be too much of a loose-cannon to host the whole telecast, but there’s a time and a place for Gervais’ particular brand of refreshingly crude, take-no-prisoners humor, and two minutes smack-dab in the middle of the telecast might just be it.

Teigen’s cry-face meme
It’s the way it goes these days: One minute you make a weird face crying on TV, and five minutes later, you’re a meme. Bonus points to Teigen for being an excellent sport about the whole thing.

George Clooney being George Clooney
George Clooney, undisputed master of Giving The People What they Want, proved that he still knows the way to an audience’s heart, giving a heartfelt and self-deprecating acceptance speech upon receipt of the Cecil B. Demille award. Clooney hit all the beats: #jesuischarlie, tributes to Robin Williams and Lauren Bacall, and an adorable riff about meeting the love of his life. Try (and fail) to steel yourself against this man’s charms.

Accessories!
While Amal Clooney’s white opera gloves may have been a point of contention — albeit a subtly brilliant F-you to the mani cam — Lupita Nyongo’s glasses were, like everything Lupita does, an instant hit.