In praise of interrupting: Why telling co-workers to monologue at each other isn’t a solution to the "speaking while female" problem 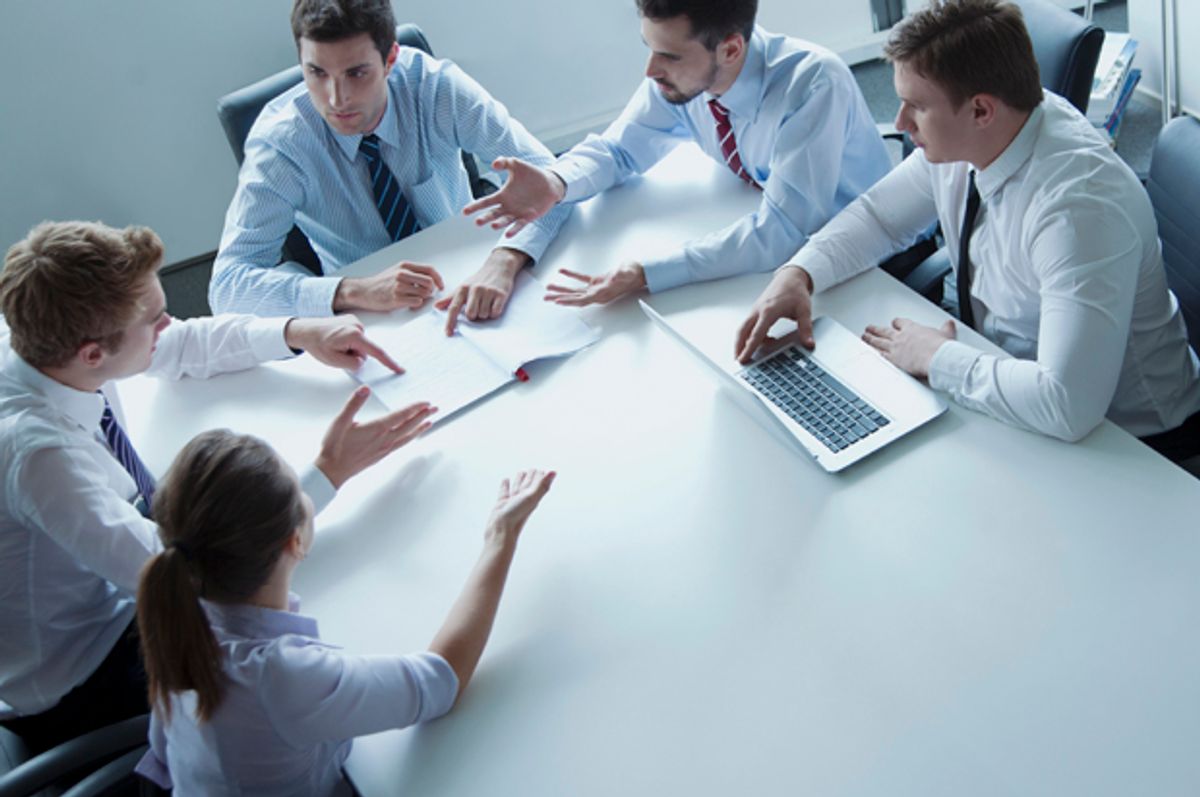 Few articles have flooded my feed this week like “Speaking While Female,” part of the New York Times' four-part series on women in the workplace written by Facebook COO Sheryl Sandberg and Wharton School professor Adam Grant. The article, which opens with an anecdote about female writers feeling silenced by over-talking male colleagues in the writers’ room of “The Shield,” explores gendered communication dynamics in the workplace.

If my social network is any indication, the thesis of the article is spot-on for women across a spectrum of professions: “When a woman speaks in a professional setting, she walks a tightrope. Either she’s barely heard or she’s judged as too aggressive.” A chorus of “STORY OF MY LIFE” tumbled forth with the article shares, anger and frustration palpable.

The anecdote about “The Shield” story meetings features producer Glen Mazzara watching as two of his writers, young women, were “interrupted or shot down before finishing their pitch” almost every time they began to speak. “When one had a good idea, a male writer would jump in and run with it before she could complete her thought,” wrote Sandberg and Grant.

Instead of confronting the issue head-on, Mazzara “found a clever way to change the dynamics that were holding those two female employees back.” He instated a no-interruption rule during pitching. “It worked, and he later observed that it made the entire team more effective,” they wrote.

I’m going to interrupt now and say that certainly Mazzara meant well, and he should get a thumbs-up for not blowing off their concerns. But the “Lord of the Flies”-style rule of the conch is a lousy workaround for dealing with unconscious biases in the workplace. For starters, it doesn’t sound like interrupting was the problem in that room—the problem was a bunch of guys who believed, on some level, whether they were aware of it or not, that their female colleagues’ contributions were less important, and a boss who apparently didn’t notice until it was pointed out to him. Once they left Mazzara's no-interrupting zone to lead their own teams, would their behaviors resurface?

Sandberg and Grant offer Mazzara’s solution as an example of taking “steps to encourage women to speak and be heard.” Does it? It looks like an elaborate dance around sexist behaviors. It also seems like a cosmetic fix in lieu of proactively rewarding women with raises, promotions or more interesting work for speaking up with the same intensity as their male peers, a discrepancy the article also describes.

The authors also wonder what would happen if, like the famous all-female-reporter press conference, "we all held Obama-style meetings, offering women the floor whenever possible. Doing this for even a day or two might be a powerful bias interrupter, demonstrating to our teams and colleagues that speaking while female is still quite difficult."

If Sheryl Sandberg herself read this to me I would have to interrupt her right there. That's a flashy move, sure, and one that can help a leader disrupt his or her own patterns of behavior. But I'd argue that once you know you have a tendency to ignore women in meetings in favor of men, and if you agree that that's a problem, you don't need a high school-level social experiment stunt to call attention to your enlightenment. Do it for a day or two and then what? Go back to business as usual, proud that you made a statement?

Anyway, who says interrupting is always a bad thing? Don't Kanye each other onstage, of course, but a little back-and-forth in a meeting is not to be discouraged. I confess I am often that mouthy person in meetings who interrupts with a question or a concern. I’m also a verbal processor who loves a dialogue to tease out ideas, and I’ve been known to monologue until someone else jumps in and saves me from myself. So please, interrupt me if you have something interesting to say.

I’ve been lucky to work for men and women who aren’t sexist jerks, who didn’t penalize me for being assertive. I’ve also seen the flip side—it’s real and it’s demoralizing. If an organization has a sexism issue, procedural changes like “no interruptions”—or cosmetic moves like sharing Sandberg and Grant's article without reflection—might make management feel like they’re doing something about it, but surface solutions don’t get to the root of deep problems. In a truly respectful environment, we’re able to tell each other on an individual basis whether or not we mind being interrupted (I promise I'll stop!), and we wouldn't fear a bad performance review in return. A lot of complicated, messy prejudices need to be dealt with to get us there, and that's hard work. Leaders especially have to recognize the problems and speak up about them as they happen, over and over again until real cultural change occurs. They can't just put a bunch of clever rules in place and hope for the best.