The March for Life is a march against birth control. Will the GOP get behind it?

The antiabortion movement has set its sights on birth control. Will the GOP continue to embrace its fringe agenda? 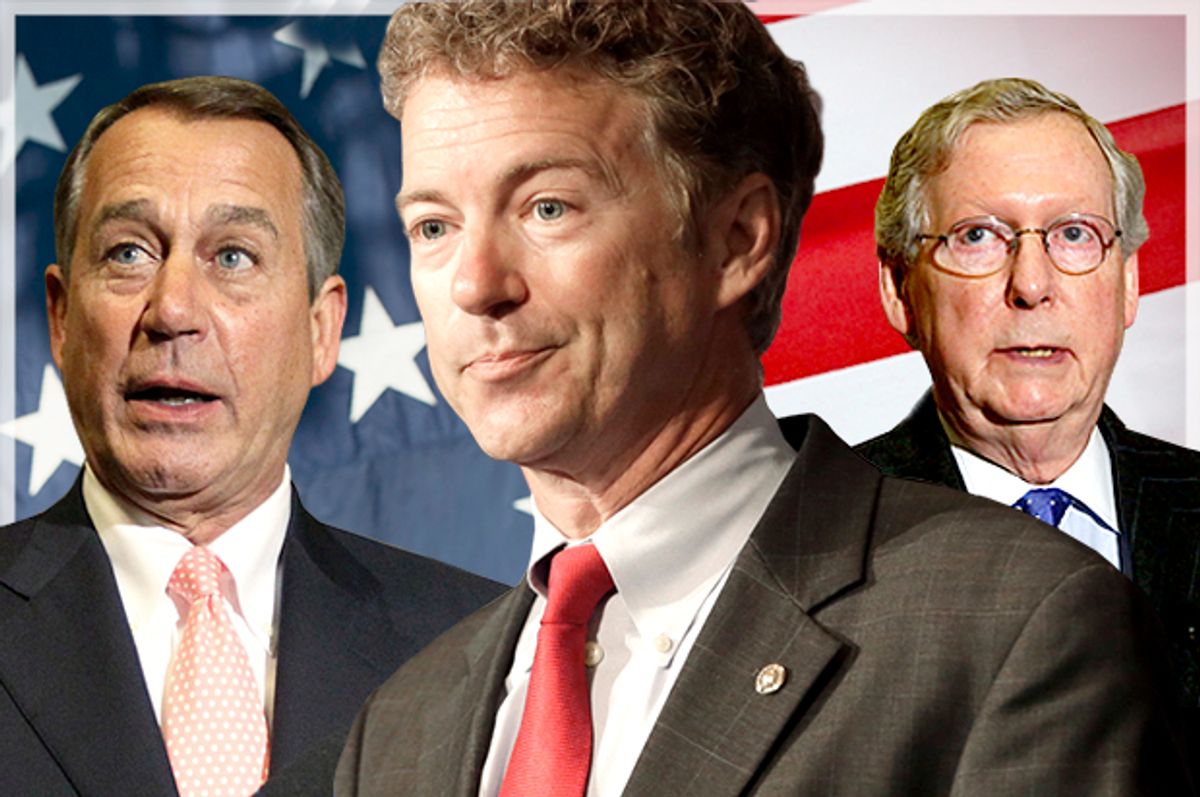 Every January, pegged to the anniversary of the Supreme Court’s landmark decision in Roe v. Wade, thousands of antiabortion protesters travel to Washington, D.C., for the annual March for Life. It’s also quite an event for many in the GOP. Last year, Republican National Committee chairman Reince Priebus delayed his party’s annual winter meeting to attend the march. He also chartered a bus to the march, inviting other members along. John Boehner has delivered remarks there, as have Rand Paul and Rick Santorum. This is all pretty standard, of course. Republicans don't try much to hide their antagonism to abortion rights when asked about the issue, or when introducing and passing laws.

In fact, the party's position against abortion is explicit in its platform:

Faithful to the "self-evident" truths enshrined in the Declaration of Independence, we assert the sanctity of human life and affirm that the unborn child has a fundamental individual right to life which cannot be infringed. We support a human life amendment to the Constitution and endorse legislation to make clear that the Fourteenth Amendment's protections apply to unborn children.

But last year, the group behind the march, the March for Life Education Defense Fund, quietly filed a lawsuit challenging the Affordable Care Act. In the complaint, the group defined all hormonal birth control as abortion-inducing drugs:

Defendants seek, under the Patient Protection and Affordable Care Act (“ACA”), to require the March for Life to provide hormonal birth control items or intrauterine devices, which may prevent or dislodge the implantation of a human embryo after fertilization (hereinafter “abortifacients”). [...]

In the category of “FDA-approved contraceptives” included in the Mandate are all hormonal contraceptives, IUDs, and emergency contraception, which March for Life and its employees believe function to prevent the implantation of a human embryo after fertilization in some cases.

The complaint echoes the language of other antiabortion groups like the Susan B. Anthony List that conflate birth control and abortion, revealing a dual strategy to restrict both that is selectively deployed in public debates about the issues. “Rather than applying the claim that some contraceptive methods in effect cause abortion consistently to all aspects of their advocacy, antiabortion groups ignore and often contradict their positions when it might hurt them politically,” wrote Joerg Dreweke in a study he authored for the Guttmacher Institute.

“If you want to ban abortion and you define abortion to include various birth control methods, then your agenda is to ban these birth control methods. It’s cynical and deceptive to stand by this position only when it’s politically expedient,” Dreweke told Salon, adding that recent attempts to restrict abortion should be considered part of the same agenda. “Antiabortion organizations and the conservative movement are conflating abortion and contraception to undermine access to both," he said. "Attempts to restrict abortion after 20 weeks should be viewed in this larger context of broadly rolling back women’s ability to obtain a range of reproductive health services including birth control and abortion.”

The March for Life complaint also echoes the medically unsubstantiated claims made by Hobby Lobby before the Supreme Court. But contraception and abortion are not the same thing. Hormonal birth control like the pill and emergency contraception like Plan B and ella work by delaying ovulation. Hormonal IUDs thicken cervical mucus to prevent sperm from reaching the egg. When used as a form of emergency contraception, the copper IUD can interrupt implantation, but this still does not mean a pregnancy has occurred. (For more on how contraception actually works, you can read my interview with a board certified OB-GYN about the mechanics of different methods.)

But as medically unsubstantiated as its claims were, Hobby Lobby at least tried to adopt a moderate posture by targeting emergency contraception and IUDs and leaving the pill alone. The March for Life Education Defense Fund’s suit makes no such distinction. And this is radically out of step with most Americans, and claims made by some Republicans in Congress and state legislatures across the country.

Americans are pretty clear about birth control: They like it. They use it. A Kaiser Health Tracking Poll released last year found the public supports the birth control requirement in the new healthcare law by a 2-to-1 margin. And according to another report from Guttmacher, more than 99 percent of women between the ages of 15 and 44 who have ever had sex have used at least one contraceptive method, and that number holds for sexually experienced Catholic and Protestant women, too.

And the GOP kind of gets this, that an overwhelming number of people in this country like being able to have sex without having babies. Which is why you saw Colorado Sen. Cory Gardner and others do all manner of gymnastics to blunt their anti-choice records with campaign talk about over-the-counter birth control. (That particular priority, by the way, is nowhere on the Republican agenda for the new Congress.)

But as the GOP’s supporters in the antiabortion movement make it increasingly clear that their aims are to target abortion and birth control, the GOP’s recently embraced moderate posture is going to be an increasingly difficult line to walk. Eventually, Republicans will have to pick a side in the birth control wars. Or become more honest about the side they’ve already picked.