On the third go-round, Mitt Romney wants America to see his true, natural self. This should be good ... 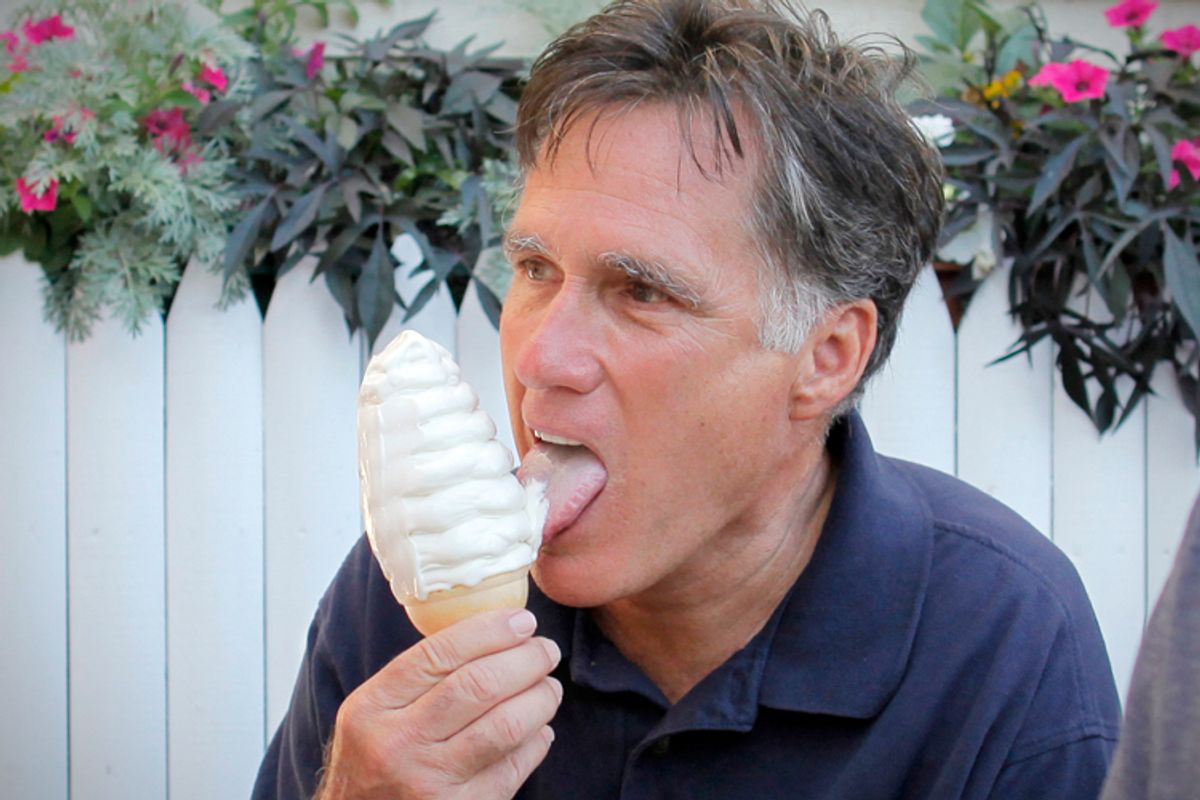 Lines are forming in the streets of small-town America to catch a first glimpse of the brand-new, third-generation Mitt Romneybot 2016S model. What new features will it have? We'll find out soon enough -- in a  matter of "weeks, not months," according to trade publications. Early rumors suggest that the Romneybot 2016S will be programmed with advanced algorithms calibrated to the output of humanoid "emotion" regardless of input. Technical tweaks remain, but the pre-rollout marketing teaser is already here. Romneybot 2016S: Come see the softer side of Mitt.

"The former Massachusetts governor also says he’ll have a different communications staff," Politico reports, "and hopes to show voters a version of himself they didn’t get to see last time. (There’s even a Netflix documentary he can point to.)" That's the Mitt Romney that Mitt Romney wants to share with the public this time in order to trick them into making him president. The Mitt of "Mitt," the Netflix documentary that depicted him demonstrating such human-like traits as Pleasure and Anger and Down-to-Earthness. Or the Mitt Romney featured in the video that played prior to his convention speech, in which friends and family testified to his character.

Is this the "real" Mitt? Normal guy, just sayin' normal stuff and doin' normal things when the cameras are off? Sure! It's almost like, outside the context of politics, Mitt Romney is different than the mechanical one he displays to the public. This makes him a lot like every other prominent politician.

There are two "real" Mitts, though. There's the aforementioned one who's considerably less tiresome, even delightful on occasion, in his private sphere. Then there's Professional Mitt, whether the profession is management consulting/private equity or politics: the one that pores through reams of data to determine the high-percentage play on every public utterance or move he makes, getting some right, some wrong. The creation of Real, Authentic Mitt will be an elaborate, data-driven affair.

Mitt Romneybot 2016S will want to talk about poverty. "Romney, who made a fortune in the financial sector and was cast by Democrats in 2012 as a heartless businessman," Politico reports, "wants to make tackling poverty — a key issue for his 2012 vice presidential running mate, Rep. Paul Ryan — one of the three pillars of his campaign." They're going to make it sound as though Mitt Romney woke up in a cold sweat in the middle of the night and realized, By golly, we've got a poverty problem in this country! I've got to fix this! As usual, though, the mechanics of his mind are obvious for anyone to see: "tackling poverty," as a nominal campaign theme, is a tactic through which Mitt can protect himself against all the attacks on his wealth that took him down in 2012.

Everything is mechanical and obvious, always, with this guy. In this same Washington Post article in which we hear about Mitt's Strategy To Display Human Traits, and allegedly not get trapped into saying stupid things in the GOP primary that would hurt his chances in the general, we're also treated to this contradictory bit of information:

In the conversations, Romney said he is intent on running to the right of Bush, who also is working vigorously to court donors and other party establishment figures for a 2016 bid. Romney has tried to assure conservatives that he shares their views on immigration and tax policy — and that should he enter the race, he will not forsake party orthodoxy.

How about that? The real, authentic, human Mitt Romney is carefully studying the traffic routes and finding the appropriate lane in which to position himself. Positioning yourself to the right of your main rival, Jeb Bush, on a couple of issues in which he's vulnerable -- this sounds like a carefully plotted, opportunistic strategy, not quite the seat-of-the-pants operation on which we'll be "sold." And you've got to appreciate how he'll only "share" these views "should he enter the race."

If Mitt Romney runs, and he sure seems like he will, have no doubt that he and his consultants will be trying to sell you something, same as always. Which, hey, go for it. Politicians are calculating! Mitt is just especially calculating, and indiscreetly so. That is his true political self. It's going to be amazing and perhaps a little hilarious watching him attempt to execute this latest iteration of himself. Maybe he'll announce his campaign through a YouTube video where he's in a dark bedroom, sobbing, listening to the Cure, wailing about poverty.