The best part of last night's "Parks & Recreation": Why the season premiere's time jump was perfect 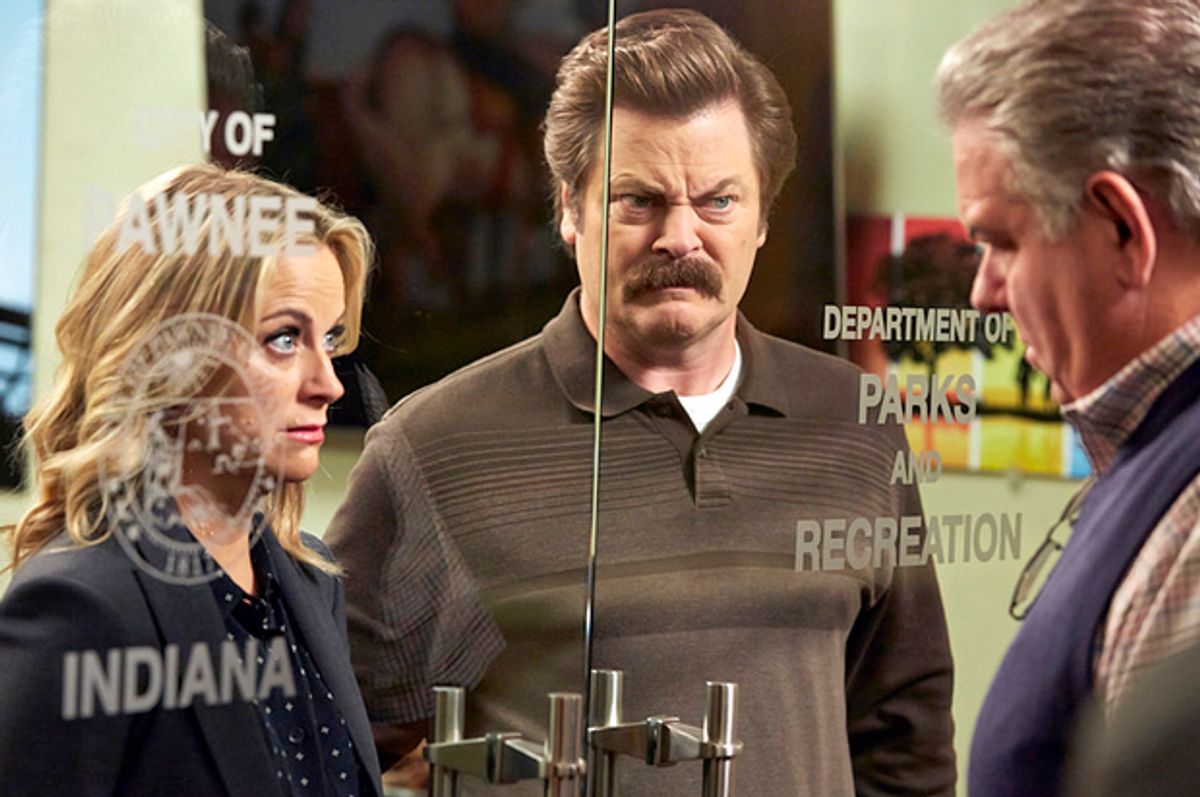 “Parks & Recreation” returned for its final run of episodes last night, and after last year’s sluggish season, I was delighted to see the show displaying a renewed energy and quickened comedic pace, not to mention some of the laugh-out-loud funniest lines in ages (“Is that a new bolo tie?” “Yes, my son sells them on Etsy. He is a huge disappointment.”) The success of the first two episodes was in large part a result of the three-year time jump introduced last season, which was exactly what the show needed to breathe new life into an increasingly tired formula. Heck, I think all shows struggling with plotline ennui should employ this sort of rejuvenating time jump. Hannah and Marnie as 30-year-old ladies who lunch? Mindy navigating text-message etiquette circa 2018? Bring on the fast-forwards! Here’s why the tactic worked so well here:

"Parks"’ strength has always been the relationships between its characters, but in recent seasons it was having difficult finding fresh storylines and coming up with new ways to have the characters interact. Skipping forward is a way to shuffle the deck on the show’s social dynamics — namely, by upending Ron and Leslie's stale mentor-mentee relationship and turning them into enemies — and to introduce fresh conflict while still letting us feel like we're back hanging out with old friends. It also allowed for subtle and interesting shifts in character, like a slightly more brittle Lesie, a more mature Andy, a Ron who has finally thrown off the yoke of federal government in favor of the unimpeded pursuit of capitalism, et al.

When I found out Leslie was pregnant, I was not pleased. Sitcom pregnancy storylines are notoriously boring — there’s only so much humor you can wring out off bumping into stuff and weird food cravings — and we just went through that slog with Ann, anyway. Kicking things off in medias res was a great call here.

Setting the season in 2017 gives "Parks & Rec" the opportunity to subtly introduce us to its uniquely bizarre vision of the future: everyone has holographic tablets, Kevin James is the new Jason Bourne and a tech monolith called Gryzzl rules the world (at times this feels a lot like a "Parks & Rec"/"Silicon Valley" crossover episode, down to the Erlich Bachmann doppelgänger). A la Spike Jonze's “Her,” it’s super fun to see the subtle aesthetic choices manifested in different visions of the future, and pushing the evolution of present trends to the point of absurdity is an ever-fertile ground for comedy.

It's also instantly funny to bring back old characters with a radically new take, like the fact that Joan Callamezzo has become a train-wreck, Tammy and Jamm are beaus, and of course, the big reveal that the “stupid garbage-head doody face" whose name cannot be uttered in Leslie's presence is none other than Ron himself. Plus, alluding to the mysterious "Morning Star” incident that turned Ron and Leslie from kindred spirits to mortal nemeses sets up a great little mystery to unravel over the season.

5. Setting up the perfect finale

Last season’s big Unity Concert felt a little too much a series ending, so they needed a way to up the ante even more for the grand finale, which the time-jump has done well. As we are reminded, the show has come a long way since the days when Andy was dating Ann and Leslie had a simple dream of filling the pit at Lot 48. By turning Pawnee into a flourishing center of government, making Tom a successful entrepreneur, etc., the show is setting up a nice dramatic arc that shows how far we've come, while simultaneously (presumably) bringing things full circle. Getting some stuff out of the way also sets up some of the big goals we want the characters to achieve by the end. Now that Tom has finally achieved business success, he can focus on finding love. Leslie, now a Parks department hotshot, can finally build the epic oasis of greenery that the Sweetums-addled citizens of Pawnee need (And finish the Pawnee Commons? Is that still a thing?). And April and Andy, poor, boring April and Andy, can... have a baby? As long as they time-jump through the pregnancy, we support that wholeheartedly.