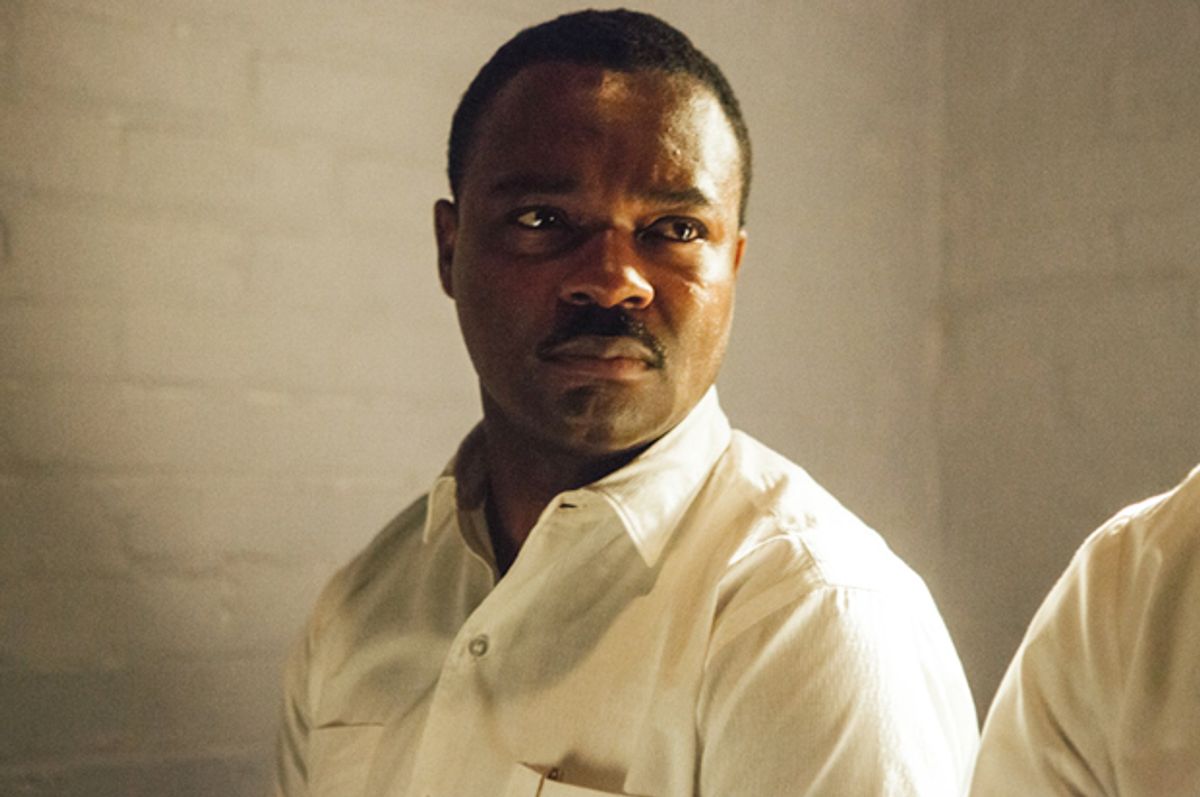 This morning, the Academy of Motion Picture Arts and Sciences announced their nominees for the 87th annual Academy Awards. The Oscars are the most prestigious film awards in America, and they remain the strongest motivator for film studios to produce work that is more than just feel-good summer blockbusters. The Oscar is a trusted brand that encourages audiences to stray outside of their comfort zone; film is a profit-driven business, but the Oscars are a way to influence what consumers are willing to pay for.

So it does matter that this year the critical hit “Selma” only got two nominations—one in the stacked category of best picture, and the other for best original song. Best picture is a fantastic nomination. But if a film can’t get the votes required for any of its cast to be nominated—or its director, Ava DuVernay, who would have been the first black woman nominated in the category—it’s highly unlikely it’ll pool together the votes for best picture. There just isn’t a lot of excitement for “Selma” in the academy, which is 94 percent white, 77 percent male and has an average age of 63.

Any voting body has its politics, and not every film about race relations is a good one. But this is about more than the academy—it’s about Hollywood having a systemic blind spot toward the stories of black people, except in very specific situations. “Selma” is a rare mainstream film that tells the story of the struggle for black civil rights without inserting some kind of white, heroic savior. Contrast this to “Django Unchained,” where Jamie Foxx’s Django is freed by Christoph Waltz’s well-meaning German; or “The Help,” where Emma Stone’s Skeeter finds a way to catalyze the civil rights movement for the maids played by Viola Davis and Octavia Spencer. Even in best picture winner “12 Years a Slave,” Brad Pitt swoops in to save the day for Chiwetel Ejiofor’s Solomon Northrup. That was true to Northrup’s memoirs, but a useful truth for some of the movie’s marketers, who used Pitt’s image on posters instead of Ejiofor’s. There’s no question that white people have been and continue to be an instrumental part of advancing positive race relations in America. But it’s also hard to deny just how much fear there is for a story that doesn’t offer a convenient “out” for white audiences.

But as it’s been passed over for serious awards this year, allow me to bring your attention to another project, which has an Oscar-winning writer and an Emmy-winning producer attached to it: Amazon Studios’ “Point of Honor,” part of their latest batch of original pilots that could go to series. (Amazon is trying very hard to be both an Internet company and a television network at the same time; that means that inevitably, the process is confusing to anyone used to the regular process. But the way their pilots work, viewers can watch and then vote for the ones they like, and the votes have some bearing on whether the pilots are ordered to series.)

The timing is impeccable—it’s the week before Martin Luther King Jr. Day, a week in which both the Golden Globes and Oscar nominations have us talking about “Selma.” It’s the same week that Amazon Studios announced, in a breathtaking display of amorality, that they’re going to toss a bunch of money at Woody Allen for an original series. But if that seemed vaguely terrible, “Point of Honor” is specifically terrible. The pilot demonstrates ridiculous historical inaccuracy and mind-boggling racial insensitivity, but that doesn’t even really cover it. It’s more that the show is offering up a narrative of whiteness in the South that is worryingly, terrifyingly convenient in a world still very much plagued by racial inequity.

“Point of Honor” is a show about the Rhodes family, a white, slave-owning, wealthy family in Virginia that chooses to both free their slaves and fight for the Confederacy, occupying two different kinds of martyrdom in one fell swoop. It’s a premise that has little to no historical basis—and the implications are breathtaking. “Point of Honor” takes a war that was about the relative personhood of black people and makes it the backdrop for a story about how a white family’s fortunes are affected by the tragedy. It would be bad enough if were just a modern-day rehash of “Gone With the Wind”—but “Point of Honor” lacks that film’s quality or the excuse of being made in 1939.

Historical accuracy, or lack thereof, is an easy critique to lob against any period piece—it doesn’t matter how hard it tries, something’s going to be off. With “Point of Honor,” though, when one character says to another, “This is lunacy,” they are not far off. When the premise of the show was first announced, the Atlantic’s Ta-Nehisi Coates wrote, “Making a series about a family fighting for the Confederacy and freeing their slaves is like making one about butchers disgusted by meat,” pointing to the Confederate Constitution as proof. In the pilot, a character tries to argue almost that exact point to one of the protagonists—John Rhodes, the brother who decides to free his slaves. “Read the Confederate Constitution. This war is all about slavery.” John’s stirring response: “They write in ink. We write in blood.” Lunacy, indeed—a lunacy baked into the premise to avoid making the white characters unsympathetic, which would be, apparently, a far worse sin.

Meanwhile, although slavery is the constant point of discussion for our heroes, the actual slaves’ stories are marginalized, at best. A black character does not speak until seven minutes and 48 seconds into the pilot, and at that point she is completely ignored by the white protagonists. It’s not until 17 minutes in that “Point of Honor” offers a glimpse of the hell that these slaves would be enduring—a vicious overseer, families being broken apart, and filthy living quarters. And even then, it’s just a glimpse—because the slaves are really only there to support the characterization of the white people. When the Rhodes siblings descend to the slave quarters to announce that they are free, “Point of Honor” literally launches into a black woman singing “Amazing Grace” while the slaves, old and young, celebrate their freedom and thank their magnanimous former owners. Overlooked is the extremely difficult question of where, exactly, a freed slave would run to in Virginia in 1861, hours after the bombardment of Fort Sumter. Kate, the eldest sister, offers to let them stay, saying, “We’ll pay you wages.” Slavery: solved. You can all go home now.

To the show’s credit, it does make an attempt to introduce some doubt into the heroes’ minds—the aforementioned Kate pushes hard against her brother’s decision to free the slaves, perhaps because no one would free their own slaves. But that’s when the show stumbles into storytelling issues of a less racist, more conventional nature: The characters are barely more than fleshed-out stereotypes. It’s hard to keep all the young dashing men and pretty women straight, because they’re mostly a muddle of “strong female character” and “Southern gentleman” traits. This is to say nothing of the baffling costuming, that isn’t even in the realm of being close to historically accurate, or the fact that Lorelai Rhodes, the middle daughter, sits down to a piano and starts playing “Clair De Lune,” a song that will not be composed until 1902.

Writer and director Randall Wallace, who wrote “Braveheart” and “Pearl Harbor,” is unsurprisingly invested in the battle scenes—which have enough gore and chivalry in them to satisfy. But there are reasons that people go to war—and it’s not just romance and looking cool, as “Point of Honor” seems to suggest. The Rhodes would have, in the real world, gone to war over their right to keep their property, because that was what you did in those times. To suggest otherwise is not just wrong but irresponsible. But as “Selma’s" bizarre snub suggests, in Hollywood, irresponsible is fine, as long as it comforts academy voters’ ever-so-fragile egos.