"I was never a white supremacist": The chilling return of David Duke 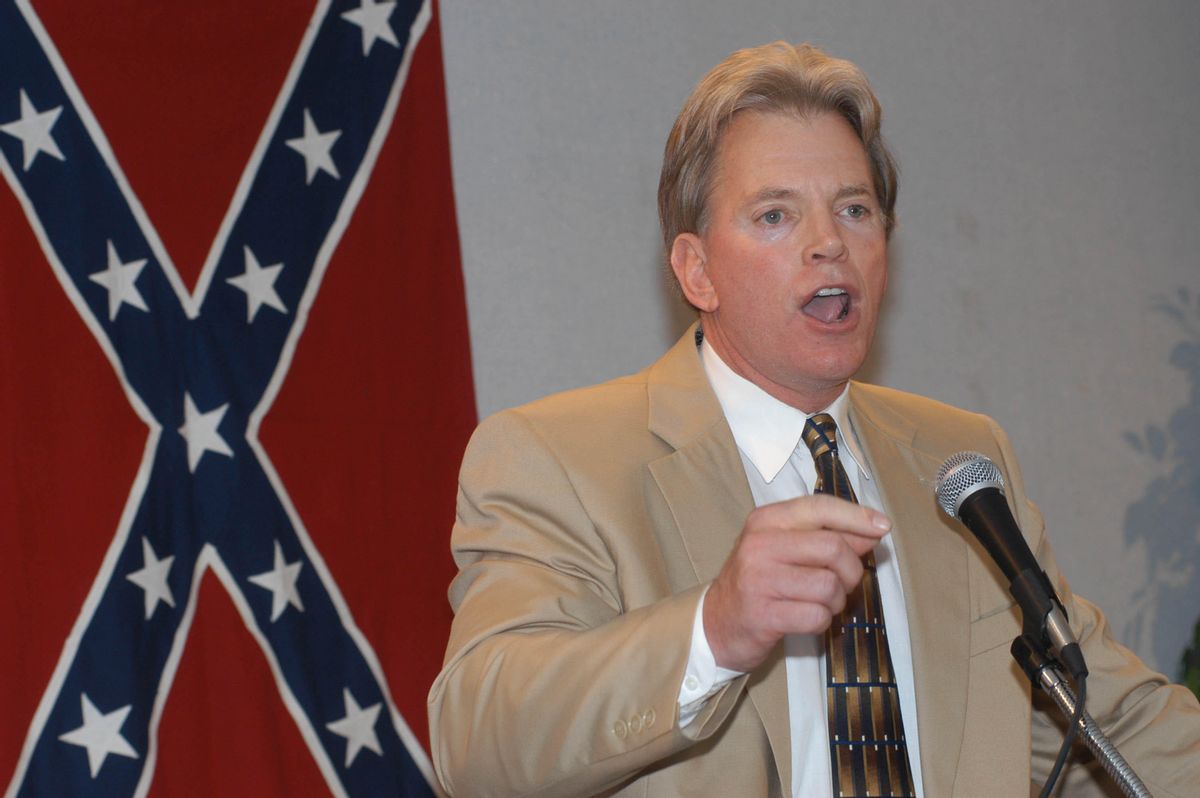 The recent scandal that erupted over Rep. Steve Scalise’s speaking appearance before David Duke’s white-supremacist organization, the European-American Union and Rights Organization (EURO), inevitably meant that mainstream media would be turning to Duke himself for answers to their questions. And indeed, Duke was interviewed on several media outlets early this month, on CNN and on Fox News.

And as usually occurs when Duke gets airtime, he parlayed the interview into an opportunity to propagandize and sell both his twisted worldview and his books. Most of all, Duke performed his specialty, which is to sell outright falsehoods and self-serving distortions.

Duke appeared first on CNN with Michael Smerconish for his weekly news-interview program on Jan. 3, then on Jan. 5 for an appearance on Fox News’ “The O’Reilly Factor” with Bill O’Reilly. On both programs, Duke attempted to make the familiar claim that he isn’t a white supremacist or a racist.

“I was never a white supremacist,” he told O’Reilly. “I’m not a white supremacist at all. In fact the European American Unity and Rights Group was in fact a chartered civil rights organization and I in fact in Louisiana legislature sponsored a bill that forbid racial discrimination and these programs called Affirmative Action which are racial discriminations.”Duke has attempted to make similar claims over the years, assuring interviewers and audiences that the ideology he promotes is not about “hate” of minorities and Jews, but “love” of Caucasian people. But of course, both his leadership of various Ku Klux Klan factions during the 1970s and ‘80s was littered with clear pronouncements of hatred of blacks and other minorities, and his work today remains viciously anti-Semitic as well.

Here is just a sampling of the hatemongering in which Duke has indulged during his many years as an activist:

“[A] black…gets a job with a white-owned company. He is the only black at the firm. He works hard, but he’s fighting a losing battle against his genes.”–Duke editorial, “The Black Plague,” NAAWP News, Issue 32, 1985.

“White people don’t need a law against rape, but if you fill this room up with your normal black bucks, you would, because niggers are basically primitive animals. It’s really the Jew Marxists who see the nigger as their instrument, as their bullets, by which to destroy our society.”– The Sun (Wichita, KS), April 23, 1975.

“Increasingly independent black economic, cultural and political power gave Blacks more freedom to do what came natural to them. Divorced from White influence and culture, they reverted quickly to their genotype — increasingly typical of black societies around the world. Males exhibited exaggerated sexual aggression and promiscuity that led to the dissolution of the Black nuclear family in America. Females reverted to the age-old African model of maternal provisioning of children.”– Duke, 1998

“Our clear goal must be the advancement of the white race and separation of the white and black races. This goal must include freeing of the American media and government from subservient Jewish interests. The Jews are trying to destroy all other cultures…as a survival mechanism…the only Nazi country in the world is Israel.”– Duke 1998

“We are fighting for the preservation of our heritage, freedom and way of life in the United States and much of the Western World. Ultimately, we are working to secure the most important civil right of all, the right to preserve our kind of life. Massive immigration and low European American birthrates coupled with integration and racial intermarriage threatens the continued existence of our very genotype. We assert that we, as do all expressions of life on this planet, have the right to live and to have our children and our children’s children reflect both genetically and culturally our heritage.”– Duke, 2000.

Duke also emphasized to both Smerconish and O’Reilly that he now possessed a Ph.D., and had written a doctoral dissertation-cum-book exposing Communism (copies of which he made sure viewers of both programs saw). In reality, Duke’s degree came from a Ukrainian “diploma mill,” and was not in fact a doctoral degree. Moreover, his thesis is a blatant rip-off of the dubious academic work of Kevin McDonald, a well-known anti-Semitic psychology professor.

Duke was also somewhat misleading about why he was hiding out in Russia in 2001. In truth, he wasevading American authorities at the time, because there was a warrant out for his arrest on wire-fraud charges for which he was eventually convicted in 2003.

He also grossly distorted the nature of his EURO organization in claiming that it was “dedicated to true civil rights and stopping the discrimination against people.” In reality, the organization has always served as font of propaganda for the “struggle against people of other colors and Jews,” and its media organs regularly produced articles about the looming “white genocide” and the depravity of other races and ethnicities, particularly Jews.

He defended Scalise along similar lines: “Of course, if he would have gone to an African-American advocacy group, who is concerned about African-Americans like the NAACP, Republicans, Democrats go to that, no problem. If he had gone to a Jewish advocacy group, even advocacy for a foreign country, which is Israel, and the interests of the Jewish people, no problem. But he came to a European organization, big problem. And don’t forget, he was an elected official. So what is America all about? Don’t we — aren’t we supposed to believe that if you’re an elected official, when you serve in Congress, you are representing all the people of your district. Not the people just who voted for, not the people you agree with. Aren’t you supposed to listen to people?”

In reality, ethnic advocacy groups such as the NAACP and the National Council of La Raza (which Duke also mentioned in attempting a similar line of argument with O’Reilly) are genuinely about advancing the interests of the ethnic groups they represent, and are not even remotely hate groups because they do not engage in demonizing and promoting false smears about people of other ethnicities. Nor do they engage in political agendas aimed at attacking the interests of other racial groups.

However, that is not the case with any kind of hate group, who typically represent only a tiny bandwidth of any constituency and whose beliefs represent a vicious kind of extremism that the vast majority of Americans repudiate. Any politician who engages with them is not only displaying questionable judgment by coddling frequently violent extremists, but is in the process helping to legitimize them by lending them the credibility of their public office.

In David Duke’s eyes, this is a profound injustice. But as always, he knew who to blame: Jews. While pretending to agree with O’Reilly “we’re all in this together,” Duke told him: “You know what, the people that run the media they’re inflaming the African-Americans against European-Americans and they’re inflaming a sector of European-Americans and African-Americans but the truth is the real people who are repressing and hurting all of us are the big bankers which are robbing us blind like the Goldman-Sachs of the world.”

At that point, O’Reilly shut him down. But in case there was any doubt who he meant, Duke finished: “They are putting us in these wars for Israel. That is hurting all of America.”