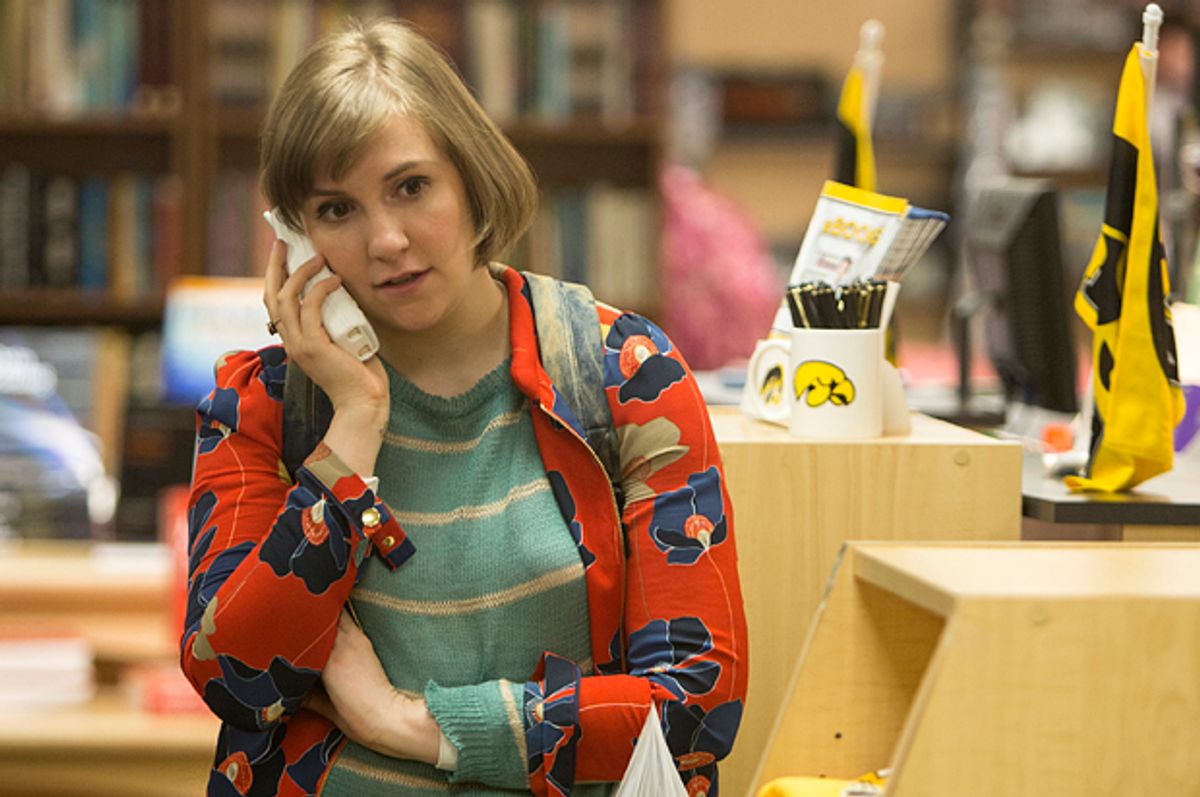 The fourth season of “Girls” began with aspiring voice-of-a-generation Hannah Horvath packing her bags for the Iowa Writers’ Workshop. Iowa is the grandfather of creative writing studies in the U.S. and is still considered, generally speaking, the prestigious standard-bearer of the discipline, so of course her family and friends are happy for her. She’s excited about finally taking her writing seriously. That may be because she’s never watched a movie set in a college creative writing program.

Try naming one fictional depiction of a university creative writing department that isn’t depressingly dystopian. “Dead Poets Society” is for little kids; it doesn’t count. Writing students are almost universally depicted as awful, and joining an English department can seem like a job suitable for only the most hapless and deranged—think Dennis Quaid’s churlish Carnegie Mellon professor Lawrence in the 2008 film “Smart People,” a real charmer of a washed-up, corduroy-sporting mess who doesn’t bother to learn his students’ names. While university life in general gets a fairly even-handed treatment on TV and film—for every murder field like the Law & Order franchise’s Hudson University, there’s a goofy party town like Harrison U. in “Old School”—creative writing programs specifically tend to look like training grounds for sadists. Given the college writing workshop’s general portrayal on film as a hilariously inept den of backbiting and pretention, it’s a wonder anyone ever applies at all.

Take Noah Baumbach’s coming-of-age film “The Squid and the Whale,” where Jeff Daniels plays the archetypal pop culture writing professor: a painfully pompous novelist who’s sleeping with one of his students—one of those awful writer-clichés that sometimes turn out to be painfully true—and lectures her over dinner about which of his own novels Norman Mailer preferred.

One of the best films about creative writing programs is “Wonder Boys,” the adaptation of Michael Chabon’s novel about a middle-aged novelist who can’t finish his new book out of personal and professional paralysis. Grady (played with dissolute charm by Michael Douglas in the film) is a weed-smoking, bathrobe-wearing, chancellor-screwing admissions office nightmare of a professor, but at least he’s kind to his undergraduates. In an early scene, workshop weirdo James (Tobey Maguire) sees his story savaged by dismissive classmates, despite Grady’s pleas for them to offer “constructive” criticism. “I think James should try to be more constructive. This is my second semester with him. His stories are brutal, man. They make me want to kill myself.” At least the luminous Hannah, played by Katie Holmes, is his champion and friend, so there’s one serious writer on Grady’s campus that doesn’t feed on the souls of innocents.

No such luck for the students in the “Fiction” chapter of Todd Solondz’s “Storytelling,” which takes place in a college writing program. There’s a workshop know-it-all who isn’t afraid to call everyone else’s stories trite, backed up by the cruel professor: “The story's a piece of shit. You express nothing but banalities and, formally speaking, are unable to construct a single compelling sentence. You ride on a wave of clichés so worn, in fact, it actually approaches a level of grotesquerie.” And there’s the insecure writer played by Selma Blair who goes home with the professor one night, has a racially-charged, uncomfortable sexual encounter with him and writes it about it for workshop, only to have her story torn apart by the other students and even the professor himself as inauthentic, clichéd and unbelievable. “Once you start writing,” the professor admonishes her with great pomp, “it all becomes fiction.”

Don’t look to “Girls” to burnish the MFA’s image. Hannah, of course, comes pre-loaded with her own self-importance, and her classmates seem to delight in taking her down several pegs in workshop—in a so-meta move that echoes criticism levied at Lena Dunham’s writing of the Hannah character, they are sure to mention that they can absolutely tell that her short story is just a very thinly-veiled account of her own life.

It’s (mostly) exaggerated for (uncomfortable, self-deprecating) humor. Nobody really thinks “How To Get Away With Murder” or “Legally Blonde” accurately reflect the law school experience. For writers who have attended or taught even one, the writing workshop is a jackpot of neurotic material, and academy-trained writers exorcising their demons from a safe distance are more likely to remember the bad behavior than the good.

Of course, the bad behavior that comes from cramming a few dozen approval-seeking writers—the know-it-alls and the insecure jerks, the golden children and the active addicts, the contrived slackers and the eager strivers—in a small, pressurized environment with their biggest competitors and their professional idols can be so, so bad. Everyone with an MFA has a story or twelve about cruel condescension, bad behavior among writers (and faculty), and the absurd sense of self-importance that can pervade even the most down-to-earth program. As Hannah Horvath continues to show us, what better way is there to work through your humiliations and your faults than to write them down and show the world?