On the eve of march's 50th anniversary, we’re learning to honor the ordinary people who made him King. Here's how 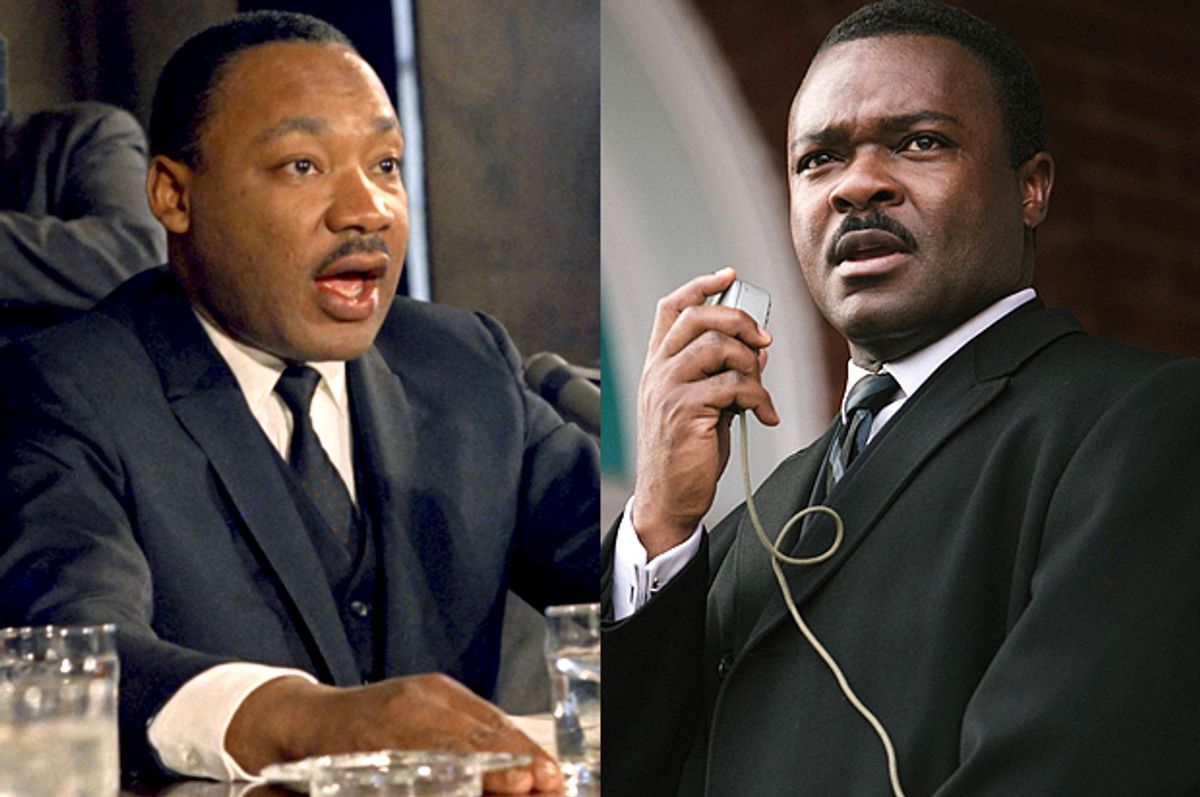 There may never be another observation of Rev. Martin Luther King Jr.’s birthday with the historical resonance of his 80th, which in 2009 was observed just one day before Barack Obama became our first African-American president. But this year’s King holiday, celebrating his 86th birthday, falls a little more than six weeks before the 50th anniversary of the Selma march, and in the middle of the unfortunate controversy over the movie “Selma.” We’ve got some new historical reverberations worth examining.

I loved Ava DuVernay’s “Selma.” Its pacing is unrivaled. Moving between portraits of quiet intimacy and epic clashes – arguments, marches, beatings, murder – it wakes us up and pulls us in and keeps us rattled and searching until we leave the theater. The violence is jarring but true to the story and never overdone. Spoiler: In a quiet, beautifully lit scene in a church stairwell, you begin to realize you’re listening in on the four little girls murdered in Birmingham in September 1963, but when it comes, the bombing still takes your breath away. It’s as clear a portrait of innocence and evil as I’ve seen.

I loved DuVernay’s King, too: a fuller, richer MLK, the man in his context, supported by family and friends; tired, doubtful, not always leading; sometimes prodded from behind. “Selma” explores the intricate dynamics of the multifaceted civil rights movement – the cautious ministers and the young firebrands. King and Malcolm X. Diane Nash and James Bevel. The wife of a local leader proudly makes lunch for King and the visiting activists, like so many leaders’ wives who went unheralded. In actual news footage from the final Selma march, near the end of the film, actor/activist Harry Belafonte waves to the camera, so young and so crucial. King matters in the film, but Du Vernay is focused on the plain people who became powerful.

But from the day it opened, “Selma” was dogged by complaints about its historical accuracy, particularly its portrait of President Johnson as opposed to King’s Selma campaign and his voting-rights agitation generally. Johnson’s top domestic affairs aide, Joseph Califano, has been relentless and unforgiving, insisting the Selma movement was LBJ’s idea and declaiming, “The movie should be ruled out this Christmas and during the ensuing awards season.” Califano’s screed reflected the pain of Johnson loyalists who saw their boss’s overall legacy destroyed by his Vietnam escalation. They are determined he get his due when it comes to civil rights. But it’s the embodiment of white entitlement not merely to criticize DuVernay’s film, or to correct the record, but to demand that Selma be “ruled out” for viewership and awards.

Of course neither LBJ nor MLK chose Selma first – it was the SNCC kids, the great John Lewis and James Forman, who worked with the city’s fed-up black residents – they made up a majority of the city's residents, but only 2 percent of those eligible had been able to register to vote -- who decided enough was enough. They brought along King, and King brought along Johnson; although both men saw the rightness of the cause, they weren’t initially as sure of the time or place.

The controversy is also an echo, 50 years later, of tension between Johnson and John F. Kennedy loyalists. The “Selma” version of Lyndon Johnson is actually a composite of JFK and LBJ. The caution preached to King in the movie would have been more accurate if it came from Kennedy. Johnson’s venerated predecessor was constantly telling King and his allies that they were moving too fast. It wasn’t Johnson, but Kennedy’s brother Robert, who sicc’ed the FBI on King, although Johnson knew about the Bureau’s surveillance. Even historical filmmakers use composite figures sometimes; we’re just not used to them being two illustrious presidents.

You can wish DuVernay stayed more true to the record on Johnson, as I do, and still admire the film. A great movie would have been greater with an accurate portrait of Johnson's complexity and passion. But I loved the generosity shown by Julian Zelizer, author of the excellent, just-published history, “The Fierce Urgency of Now: Lyndon Johnson, Congress and the Battle for the Great Society.” He was able to call the film “stunning,” while noting that it wasn’t entirely "true" to Johnson's record.

Which brings us to Selma the movement, not the movie, which we’ll celebrate on its 50th anniversary in March. Selma has much to teach us about the real MLK, too. It marked the apex of the peaceful, multiracial civil rights movement, and perhaps the apex of King’s influence, too. Stokely Carmichael and “Black Power” would replace the leadership of John Lewis, who was committed to a biracial organization, at SNCC. Five days after the passage of the Voting Rights Act, the Watts neighborhood in Los Angeles would explode in nationally televised Technicolor violence (after a police over-reaction), and a rattled white America would back away from the promise of equality Johnson had begun to keep.

King himself was eclipsed by increasing black radicalism, on the one hand, and by his own passionate opposition to the Vietnam War on the other, which split him from lieutenants like Bayard Rustin who thought the focus should remain on civil rights. As we celebrate King’s next few holidays in the context of more big civil rights 50th anniversaries, we’ll be celebrating a man, if we’re honest, whose influence was on the wane, until after he died.

But “Selma” the movie reminds us that Selma represented the power of ordinary black people to change history, 50 years ago. “Selma” is controversial partly because it dispenses with the fictional convention of the white savior, so crucial to successful race movies. But it quietly deposes King as “black savior,” too. Neither LBJ nor MLK liberated the brave black citizens of Selma; they liberated themselves, though there is much more liberation to be achieved.

Their ability to tell their own stories, for instance, lagged far behind their attainment of voting rights. Today a new generation of black artists and writers and filmmakers and critics are telling their own stories. That’s the good news: for some white people, that might be the bad news. But the battle over “Selma” represents a belated new front in the ongoing civil rights struggle, and King would be proud to watch it unfold.