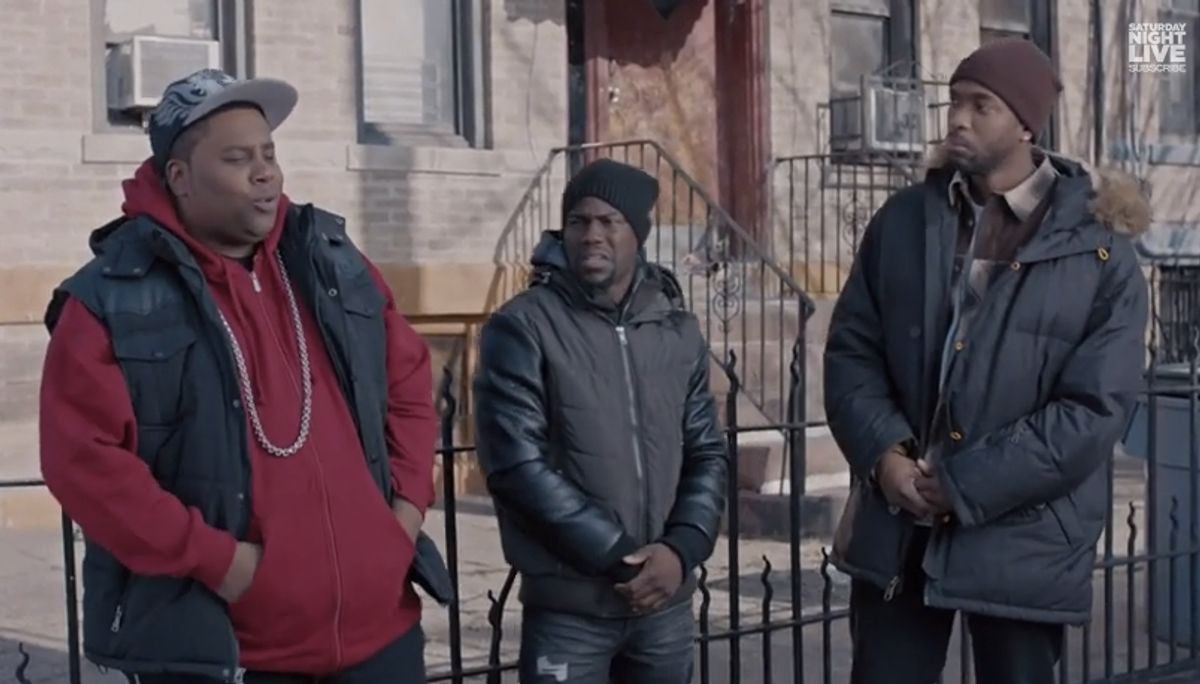 "Saturday Night Live" may be a national comedic institution, but as we are reminded every week during the cold open, it's also Live From New York. And while the show’s humor often skews broad, every so often SNL takes the time to pay homage to its iconic hometown by airing a sketch that hones in on some specific eccentricity of New York City life.

Often these sketches are among the episode’s most successful, partly because New York is full of absurd things to riff on, and also because it allows for particularly nuanced and focused satire, such as in this week's "Corner Boys" sketch that envisions what "The Wire" would have been like if it were set in Bushwick, replete with fixie bikes and artisanal mayonnaise.

Here's a look back at other ways "SNL" has lampooned city life in recent years:

In another gentrification-themed sketch from last year's Woody Harrelson ep, a bunch of dudes at a bar mourn how classic New York institutions have disappeared and been replaced by ritzy dog spas and fro-yo joints. Also surprisingly tough to find in the city these days? Good crack.

Harrelson's rather druggie-centric episode also gave us this gem lampooning the consequences of de Blasio’s new marijuana policy (namely, a bunch Brooklynites exiting their Brownstones in a fog of ganja smoke and yelling “free at last!”)

One of the most quintessential aspects of life in New York — and some might say its least pleasant — is the endless throngs of tourists who converge on the city every day. In this sketch, host Charlize Theron dons a fat-suit and heads undercover along with some other cast-members to make fun of clueless city visitors.

There was also this surprisingly poignant Bruno Mars digital short about a man who takes a job dressing up as a patriotic mouse who greets tourists in Times Square.

And of course, who could forget "Lazy Sunday," the crown jewel of the Lonely Island digital shorts (along with "Dick in a Box," natch). The short wasn't specifically about New York, but the city was as much a character in the sketch as Parn and Samberg, and perhaps gave us the most iconic media representation of Magnolia Bakery since "Sex and the City."

But Brooklyn and Manhattan aren't the only boroughs that get "SNL"'s love. A few years back, we were regularly treated to "Bronx Beat," the delightful recurring classic in which Amy Poehler and Maya Rudolph play Bronx housewives fawning over their male guests.

Even the city's so-called forgotten borough gets some love; namely, when Blake Lively swung by to reimagine the world of Serena van der Woodsen and Chuck Bass as the world of calzones and girls named Chandelier, in "Gossip Girl: Staten Island."

New York political figures often get the "SNL" treatment, and a number of them, like Giuliani and Bloomberg, have made cameos on the show. However, our favorite riff on municipal politics might have been Cecily Strong as Mike Bloomberg's emphatic sign language interpreter Lydia Callis, who became a topic of conversation during Bloomberg's Hurricane Sandy briefings.

Bill Hader's "city correspondent" Stefon might be the gold standard for NYC-centric bits. While it derives its humor from a specific NYC eccentricity -- namely, its insane, constantly evolving nightlife scene -- it's still self-evidently funny to those who have never attempted to get into a Meatpacking club boasting a name like "Spiccccyyy," "Squawk," "Unhhh," or "...Kevin?"