“Fifty Shades” of cray: Why the books' fans should stop freaking out about the movie adaptation

A new Vanity Fair feature shows how far author E.L. James went to protect the "50 Shades" world for her fans 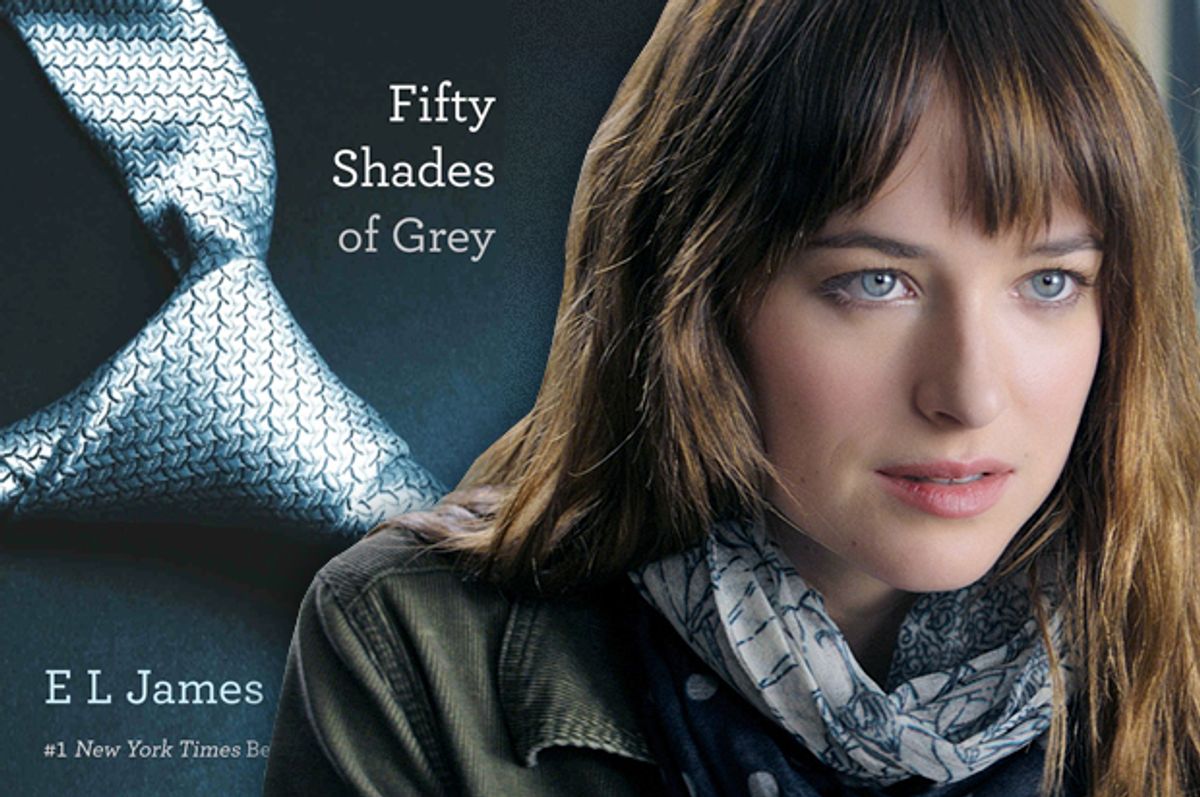 It’s difficult to tell if fans are disappointed or relieved that the film adaptation of E.L. James’ “Fifty Shades of Grey” won’t feature its infamous “tampon scene”—quite possibly, a little of both—but news of the omission has been noted and added to the growing list of details emerging about the hotly-anticipated film. James’ “Fifty Shades” series of erotic novels chronicling the romance between spunky virgin Anastasia Steele and hot, rich, kinky, emotionally-unavailable Christian Grey are international bestsellers with a loyal fan base that James first cultivated by hand in online “Twilight” fan-fiction circles. Those rabid fans now get to process the inevitable pile of liberties, like it or not, the film will take with James’ book.

They’ll be relieved to hear this isn’t one of those adaptations where the author pockets the money and doesn’t see a thing until the premiere. A new profile of the filmmaking team in Vanity Fair details the unusual amount of influence James maintained over the film to protect her vision. James came on set every day and advised heavily on everything from costume design (sending photos of the jeans Christian wears in his “playroom” with notes explaining “the color of the denim and the way they fit”) to dialogue and casting, all with the goal of protecting her fans’ expectations for the material they love. In the feature, a friend of hers said, “she truly believes that she has to control it because of the fans, because she’s the only one they trust.”

The level of involvement seems to have worked out for the “Fifty Shades” team, which includes director Sam Taylor-Johnson, producers Michael De Luca and Dana Brunetti, and screenwriter Kelly Marcel, who worked through their team’s “tense moments” together with James, whom Vanity Fair describes as “an amateur among sophisticates.” No doubt obsessive fans will appreciate her vigilance over the style of pants Christian Grey dons in ritualistic fashion before sex, but how much does it really matter in the end? A solid story told well should be able to transcend picky details like that.

Certainly, there are adaptations that sell one person’s vision of a book which doesn’t resemble anything the majority of its readers have imagined—tough break for fans of “The Great Gatsby” that F. Scott Fitzgerald wasn’t alive to hang around Baz Luhrmann’s set making a pain of himself, though even if he were, he’d likely be too drunk to be much of a help anyway—but it can feel like an impossible feat to please every reader with every detail, from casting down to the inevitable plot points that must be glossed over to translate a halfway-decent novel of average length into a single film.

Sometimes changes that could loom large to an overly-invested fan base turn out to be more than fine in practice—nobody rioted over Morgan Freeman being cast as Irish-American convict Red in “Shawshank Redemption,” a now-iconic role.  Even when the author adapts her own work, some things must be lost. In Gillian Flynn’s book, “Gone Girl” villain Amy didn’t only leave a trail of broken men in her past, she manipulated a girl at her school into thinking they were best friends and then turned her into “my stalker,” a detail that shows not only how far back the roots of Amy’s depravity go but also that she’s an equal-opportunity sociopath, not just a man-hater. Somewhere along the line, that detail had to be sacrificed for the sake of a streamlined film.

Even in the expectations-wild Young Adult fiction world of “The Hunger Games” trilogy, certain aspects of author Suzanne Collins’ narration are put into a different balance in the films, like the amount of time dedicated to the possible romance between heroine Katniss and her back-home hunting partner Gale (listen to the audiobook for an indication of how often Katniss internally sighs over Gaaaaaaale in Collins’ prose), and the on-screen story is stronger for it.

The truth is that sometimes the story improves on adaptation. Sorry, “Fifty Shades” fans, but James’ writing is far from bullet-proof. While it’s impossible to know how much could have been improved upon without her penetrating influence and dogged fidelity to her own choices—all under the auspices of protecting the property for her fans, of course—dialogue, for starters, is probably one area she should leave to the screenwriter. While adapting "The Great Gatsby" is largely an enterprise of translating heartbreaking prose to a visual medium, moving "Fifty Shades of Grey" from page to screen is an exercise in delicately translating tone and mood, and not all of the book's efforts on that front survive the journey from a reader's silent imagination to being spoken aloud. It remains to be seen how much can be added to the experience through the filmmakers' efforts, but if it doesn't work onscreen, the style of Christian's jeans will be the least of the story's problems.