“This guy’s clearly a complete idiot”: How Fox News became a laughingstock in Paris

Fox News’ journalistic sins may be serious – but here in Paris, the network has become the butt of a huge joke 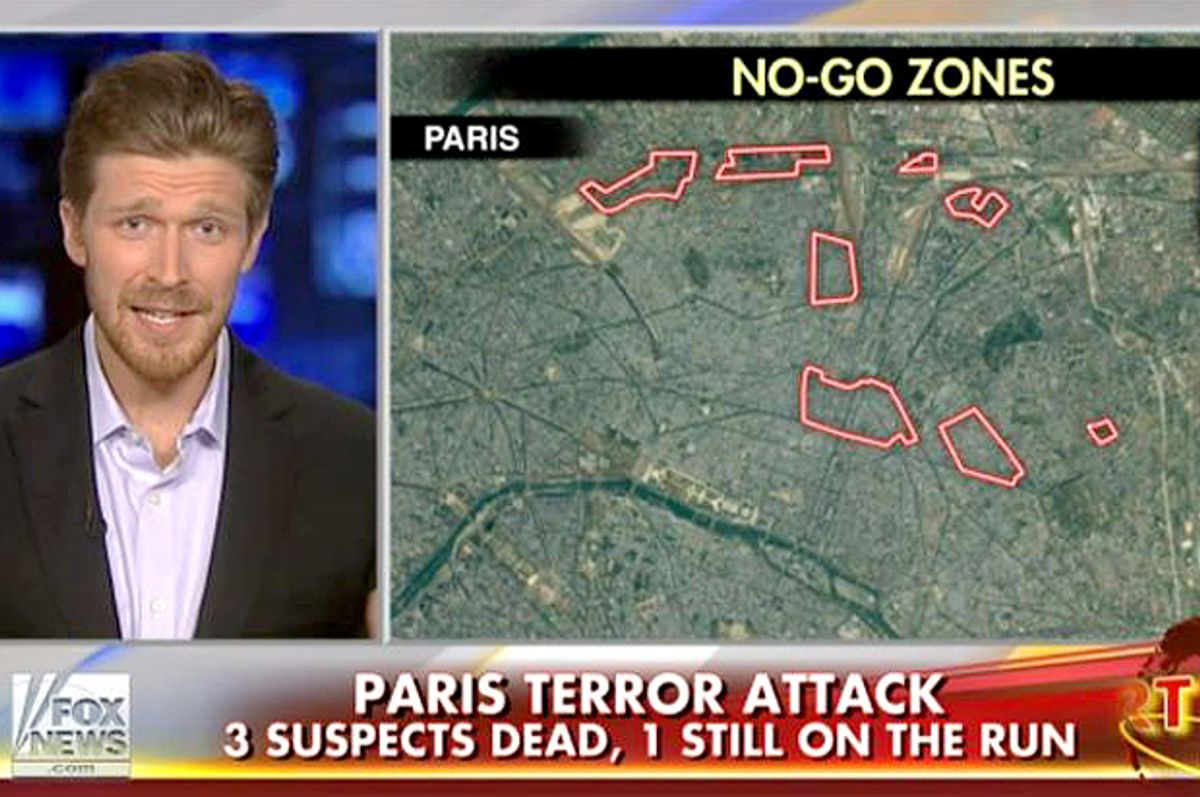 While much attention has been paid stateside to Paris Mayor Anne Hidalgo’s public threat to sue Fox News this week, less focus has been given to the network’s ridiculous behavior that prompted the call to begin with.

But here in Paris, Fox’s claims of the existence of Islamist-run “no-go zones,” here and in other areas in Europe, have been lampooned with relish.

Reeling in the wake of the terrorist attacks on Paris-based newspaper Charlie Hebdo and a kosher market, the French equivalent of the David Letterman show, “Le Petit Journal,” managed to convey some much-needed comic relief to a national prime-time TV audience in France where much of the country grieved.

The Petit Journal’s broadcast of the Parisian neighborhoods could not have more patently depicted the absurdity of Fox’s portrayal of Paris, where, in reality, people of different ages, religions and ethnic origins freely go about their business, running errands, pushing strollers, etc.

Le Petit Journal correspondents were shown visiting the “no-go zones," prompting guffaws from both the live studio audience and the incredulous passersby who were asked if their safe streets were comparable to those in Iraq or Afghanistan, if they ever saw someone wear bin Laden T-shirts, or other absurd questions. The U.S. equivalent would be asking people on the streets in Manhattan if Shariah law was the law of the streets there.

In another broadcast, Le Petit Journal cast members dressed up like U.S. journalists ventured into the “Most Dangerous City in the Universe.” They confronted such dangerous situations as a man with a “terrorist beard” driving a taxi or the site of a couscous restaurant. The sounds of a jackhammer are taken for gunfire as the fake TV reporter rolls on the ground in terror.

But while the Petit Journal’s portray of Fox’s broadcast brought smiles to the faces of millions of French TV audiences, Paris’ mayor did not mince words when she told CNN that Fox faced legal action for harming Paris’ reputation.

“Its message is shocking and stupid—this is not how you solve these kinds of problems,” Hidalgo said, during an interview with CNN. “The broadcasts have tarnished the image and the reputation of my city.”

In the wake of international ridicule levied against the ill-reputed network, Fox issued a rare public apology last week for its inaccurate depictions of purported Islamist-controlled communities in Europe.

In one broadcast, self-declared radical Islam expert Nolan Peterson compared areas in Paris to war zones in Iraq and Afghanistan. He claimed that many parts of Paris are under Shariah law where French police will not enter.

“It was pretty scary. I’ve been to Afghanistan, Iraq, Kashmir, India, and at times it felt like those places in the no-go zones,” Peterson said. “You see young men wearing Osama bin Laden T-shirts. In a hookah shop, I saw a speech by Abu Musab al-Zarqawi, who was leading an insurgency against American troops in Iraq at the time. It just, it seemed very mainstream and very accepted.”

The U.K., as well as France, was singled out as a source of Fox’ fabricated claims. Among other erroneous reports about Europe’s Muslim communities in Europe, Fox interviewed self-described “terrorism analyst” Steve Emerson who elaborated on “no-go zones” where only Muslims could go.

“In Britain, it’s not just no-go zones,” Emerson said. “There are actual cities like Birmingham that are totally Muslim, where non-Muslims just simply don’t go in.”

British Prime Minister David Cameron responded: “When I heard this, frankly, I choked on my porridge and I thought it must be April Fools’ Day,” David Cameron said on ITV television. “This guy’s clearly a complete idiot.”

Fox also last week published on its website and communicated in its news broadcasts a refuted study from Russian news agency Rossiya Segodnya that claimed 15 percent of French citizens “had a positive opinion” of ISIS.

While it was not enough for Paris’ mayor to repair the harm she said Fox has done, Fox’s Julie Banderas issued a correction: “Over the course of this last week, we have made some regrettable errors on air regarding the Muslim population in Europe, particularly with regard to England and France.

“Now this applies especially to discussions of so-called no-go zones, areas where non-Muslims allegedly are not allowed in and police supposedly won’t go,” Banderas continued. “To be clear, there is no formal designation of these zones in either country and no credible information to support the assertion that there are specific areas in these countries that exclude individuals based solely on their religion.”

Fox may have grudgingly retracted the misinformation that served to incite even more hatred against Muslims, after painting such a blatantly false picture of segments of Europe, and in particular, French and British society. And France’s Le Petit Journal was able to somehow put Fox’s and Emerson's absurd claims in a humorous light, but ultimately, they are anything but funny.

Bruce Gain is a writer who lives in France and the United States. He is the France correspondent for Automotive News Europe.