GOP's abortion freak-out: How horrible optics caused a “revolt” within the party

No, the women of the GOP aren't suddenly moderates -- they're cynics who recognized an extremist ban looked awful 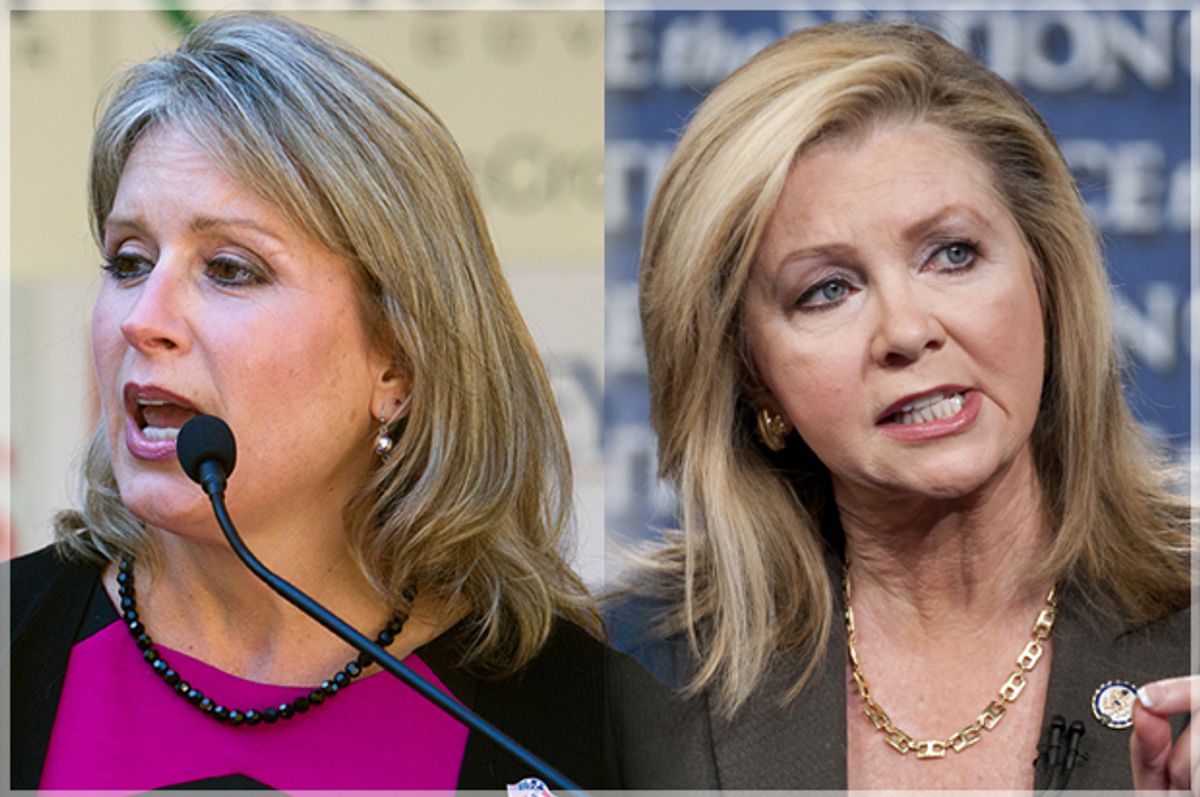 House Republicans kicked off the 114th Congress with the introduction of a measure to ban abortion at 20 weeks, and, because they have a flair for the dramatic, planned the vote to coincide with the 42nd anniversary of Roe v. Wade. That is, until this week, when a group of Republican women reportedly led a “revolt” against the measure, forcing their party to table it.

Why? They were apparently concerned about the language of the bill, which included narrowly defined exceptions for rape and incest survivors.

Republican leadership late Wednesday evening had to completely drop its plans to pass a bill that bans abortions after 20 weeks, and is reverting to old legislation that prohibits taxpayer funding of abortions.

The evening switch comes after a revolt from a large swath of female members of Congress, who were concerned about language that said rape victims would not be able to get abortions unless they reported the incident to authorities. [...] Republicans said they would’ve been able to pass the bill even if they had not changed [the language], but scores of women would’ve likely voted against it. And, furthermore, Republicans ran the risk of appearing like they were ignoring the will of women in the conference.

North Carolina Rep. Renee Ellmers is being credited as leading the charge. She pulled her name as a co-sponsor last week, around the same time that she told the National Journal that she had “urged leadership to reconsider bringing it up.”

Thing is, Ellmers didn’t seem much concerned with the bill’s narrow exception for survivors of sexual violence when she voted for an identical measure in 2013. Neither did Tennessee Rep. Marsha Blackburn, who was reported to be among the women who raised concerns. Or, you know, South Dakota Rep. Kristi Noem, Tennessee Rep. Diane Black or Washington Rep. Jaime Herrera Beutler, who all attended the meeting with Republican leadership and all voted for the exact same bill two years ago.

To call this a moment of clarity for the women of the GOP would be naive to the point of absurdity. This was a calculation about optics and nothing else. Ellmers is not championing women’s rights or women’s health, she is not asking that her party have a come to Jesus moment about its priorities. She is betting, perhaps correctly, that it would look pretty bad to take this specific issue up among the new Congress’ first votes, at a moment when the GOP is fighting, and losing, a battle to shake its image of being anti-woman.

“We got into trouble last year, and I think we need to be careful again; we need to be smart about how we're moving forward," Ellmers said in an interview with National Journal. "The first vote we take, or the second vote, or the fifth vote, shouldn't be on an issue where we know that millennials -- social issues just aren't as important [to them]."

Further dispelling any illusions about a newly moderate GOP when it comes to abortion was the swift replacement of the vote with another vote on a measure to ban private insurance from covering the procedure. The Hyde Amendment already punishes low-income women with a ban on public funding for abortion except in cases of rape, incest and life endangerment. The new Congress would like to double down and spread the pain even further as more women are accessing private insurance through the Affordable Care Act.

Despite the transparently cynical motivation behind the change in tone on the measure, the antiabortion right is, predictably, losing its mind over a perceived betrayal. Erick Erickson accused Ellmers of “stabbing pro-lifers in the back,” while antiabortion activist Jill Stanek punctuated a disgruntled tweet with “#FU.” Rick Wilson, the guy who is pretty sure that women only know how to relate to political leaders as hypothetical dudes they are dating, remarked on Twitter that Republicans “wet the bed over [an] imagined ad from Lena Dunham.”

I’m pretty sure this group will perk up soon enough. While I'm glad to see the bill tabled and the GOP's internal dysfunction on full public view, I know this isn’t the last word on banning abortion pre-viability. And the No Taxpayer Funding For Abortion Act is a bill with the same objective -- striking a blow to people’s access to basic reproductive healthcare. With the GOP still gunning to put the new healthcare law on the chopping block, and with its shameful legacy of targeting access to abortion, their renewed fight against reproductive freedom is just getting started.