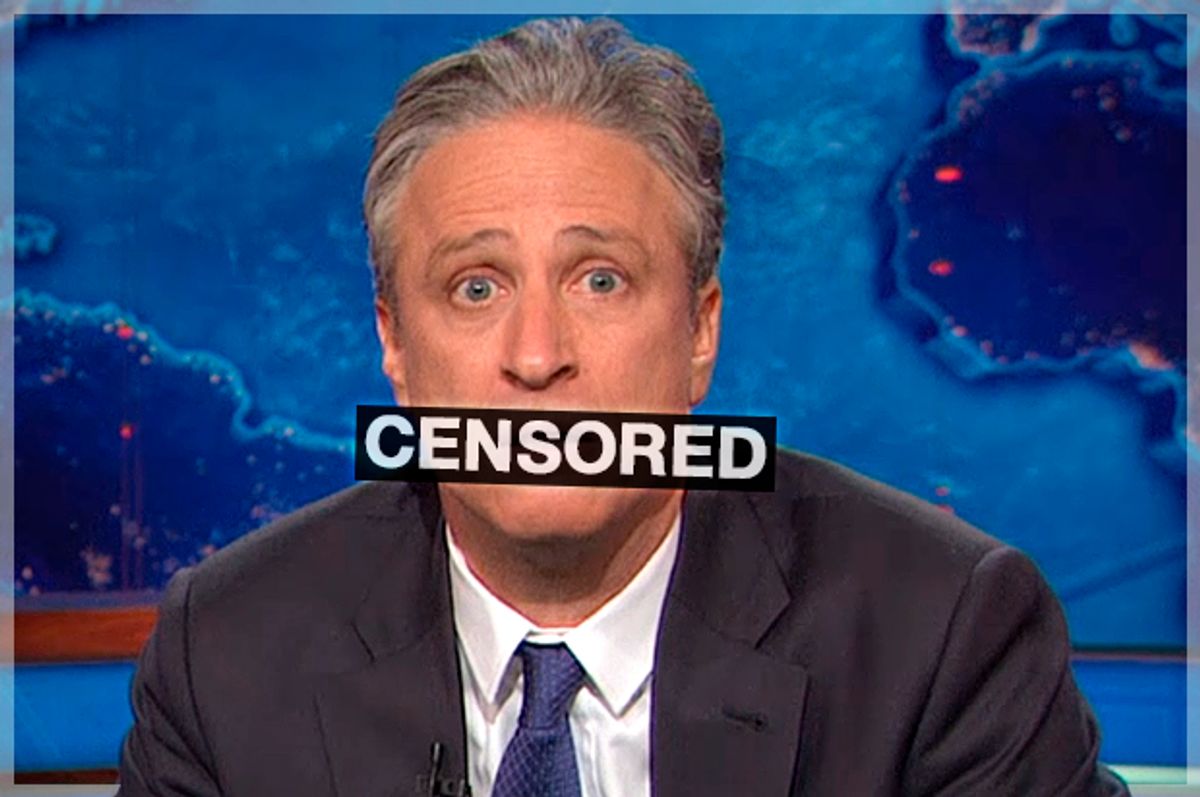 “One of the most salient features of our culture,” writes philosopher Harry Frankfurt, “is that there is so much bullshit.” This is an inconvenient fact of life for those who don’t like being bullshitted, because bullshit is actually really hard to combat. As Frankfurt understands it, bullshit is worse than lying, because at least the liar has to abide some understanding of the truth in order to deceive by telling its opposite. A bullshitter, by contrast, may say some true things and some false things, but really doesn’t care which. Thus, bullshitters don’t just deceive us by telling lies sometimes; they deceive us by breaking an indispensable rule of civil discourse: We take it on good faith that the people with whom we’re talking care to some extent about the truth of what they say.

Because it’s so difficult, then, to engage with someone who just talks bullshit without any concern for the truth of their words, I sometimes wonder whether Jon Stewart’s exasperated “fuck you” retorts on "The Daily Show" are actually more appropriate than they at first seem. When a smirking Fox News host makes fun of the president for saluting with a cup of coffee in his hand, or a professional provocateur calls rape victims “girls trying to get attention,” is it better to explain cleverly or methodically the flaws in that thinking? Or is it better to brusquely disengage from bullshitters with a pointed “fuck you”? After all, as Stewart noted — perfectly characterizing the bullshitter — on one of the several occasions he’s told pundits to fuck themselves: "You have no principle about this. You're just trying to score points in a game no one else is playing…”

You might have noticed that, over the past few years, Stewart has been increasingly exasperated and hostile on "The Daily Show," doing his routine with little variation, and in some cases simply dropping his trademark cleverness to launch into a rant. As a consequence, Stewart has drawn criticism from people who think his shtick is stale or that he’s phoning it in, who think he’s a distraction from direct action and real political change, and who think he’s too circumscribed by the for-profit media machine to be truly subversive. But I think what Stewart’s satire has become in recent years is actually an apt response to a media landscape abounding with bullshit and bullshitters.

Thanks largely to Stewart (and partner-in-crime Stephen Colbert), U.S. audiences have come to understand satire in a very specific and I think limited way: Satire is a clever form of comedy based in irony. That is, the hallmark of modern U.S. television satire is, essentially, saying a thing you don’t mean in an affected way that lets your audience know you’re being ironic. Colbert obviously uses a persona from which he never deviates to do this kind of satire, while Stewart mockingly adopts the logic of his objects of criticism before breaking from his ironic tone and exploding in critical rage.

Thus, comic irony — expressing the opposite of what you mean to achieve a humorous effect in your critique — is our prevailing satirical mode. But satire has always been much more than comic irony or cleverly insincere portrayals of the people or ideas we aim to critique. And societies have always demanded more from satire than comic irony alone.

The origins of satire are complicated, and involve satirical modes ranging from gentle and instructive irony to stinging invective. The Roman poet Juvenal’s most famous satire, his sixth satire, is a misogynistic rant against women and marriage that oscillates between scornful irony and just plain scorn:

In his first satire, too, Juvenal ponders how difficult it would be for him to avoid writing satire when his “heart burns hot with rage” when he looks around and sees avarice, ignorance, moral laxity and deterioration. This is not ha-ha satire, but fuck-you satire, the kind that channels rage as a response to what Juvenal perceives as a society that has given up on itself. Commenting on Juvenal’s satires, 17th-century poet laureate John Dryden wrote that “his Spleen is rais’d, and he raises mine,” meaning that Juvenal writes with anger in a way that also gets Dryden riled up (and he likes it).

Every time I watch Jon Stewart, I see a little more Juvenal in him (minus the misogyny that characterized so much of classical Roman literature); and when I think about Stewart’s regular interlocutors — television personalities who make a living by manufacturing bullshit; glib politicians insulated by media who aren’t interested in truth — Stewart’s Juvenalian rants begin to feel more productive than the clever posturing and comic irony that we’ve come to expect from satire.

To be sure, the profanity-laced rant is itself a limited form, and “fuck you” is a violent expression that should be used, perhaps counterintuitively, with care. Though we have a tendency to look back at historical profanity — the Shakespearean insult, "The Canterbury Tales" — with a kind of wry amusement at how people back then whom we’ve canonized as highbrow and historical could also be as crass as Lisa Lampanelli, profanity, too, has a rightful place in satire. The notorious rake John Wilmot, second Earl of Rochester, is said to have accidentally delivered his “Satire on Charles II” into the hands of the king himself. Wilmot’s satire begins:

In th’ Isle of Britain, long since famous grown
For breeding the best cunts in Christendom
There reigns, and oh! long may he reign and thrive,
The easiest King and best bred man alive.
Him no ambition moves to get renown
Like the French fool, that wanders up and down
Starving his people, hazarding his crown.
Peace is his aim, his gentleness is such,
And love he loves, for he loves fucking much.

We can see in Wilmot’s lines, penned in the late 17th century, that brusque profanity serves to debauch the king, a powerful man whose sexual exploits were no secret to his court, but were also never supposed to be acknowledged so bluntly. Wilmot also takes an ironic stance in opening his damning satire against the king in the language of an homage (“oh! long may he reign and thrive”).

The satirical invectives of Juvenal and Wilmot — not exactly what most of us think of when we think of satire today — can teach us a few important things about the range and potency of satire. One, the hallmark of effective satire doesn’t have to be subtly or cleverly veiling one’s sincere criticism behind layers of irony. Instead, being inappropriately blunt or profane in a scenario in which the satirist understands that such bluntness and profanity are inappropriate can be a productive way of cutting through the bullshit. The rise of John Oliver, whose monologues, however methodical at times, are unmistakably ranty, is a testament to the fact that we sometimes crave invective over irony, to get straight to the point of critique. Two, satire doesn’t have to be funny. The long tradition of satire is full of invective whose primary aim isn’t to make people laugh, but to throw someone on the defensive who’s otherwise insulated by power, wealth, or other kinds of privilege, including privileges derived from decorum (Oh, LeBron, you didn’t know? You can’t touch a Royal).

Finally, by taking a more historical view of satire, we learn that different circumstances call for different satirical modes. Juvenal’s invectives often grew out of a sense that an older and better way of doing things had fallen so far out of fashion that his society had become, in so many ways, unbearable. Jon Stewart tilts his chin to the ceiling and screams obscenity in the middle of what appears a tactless rant because his objects of critique aren’t interested in reasoned dialogue, clever jabs or unveiled truths. Sometimes, in other words, the satire we need is blunt and unsavory. In those situations — frequent, though fortunately not perpetual — when bullshit is the only thing on the menu, it doesn’t always make sense to bring your fine wine to the table.