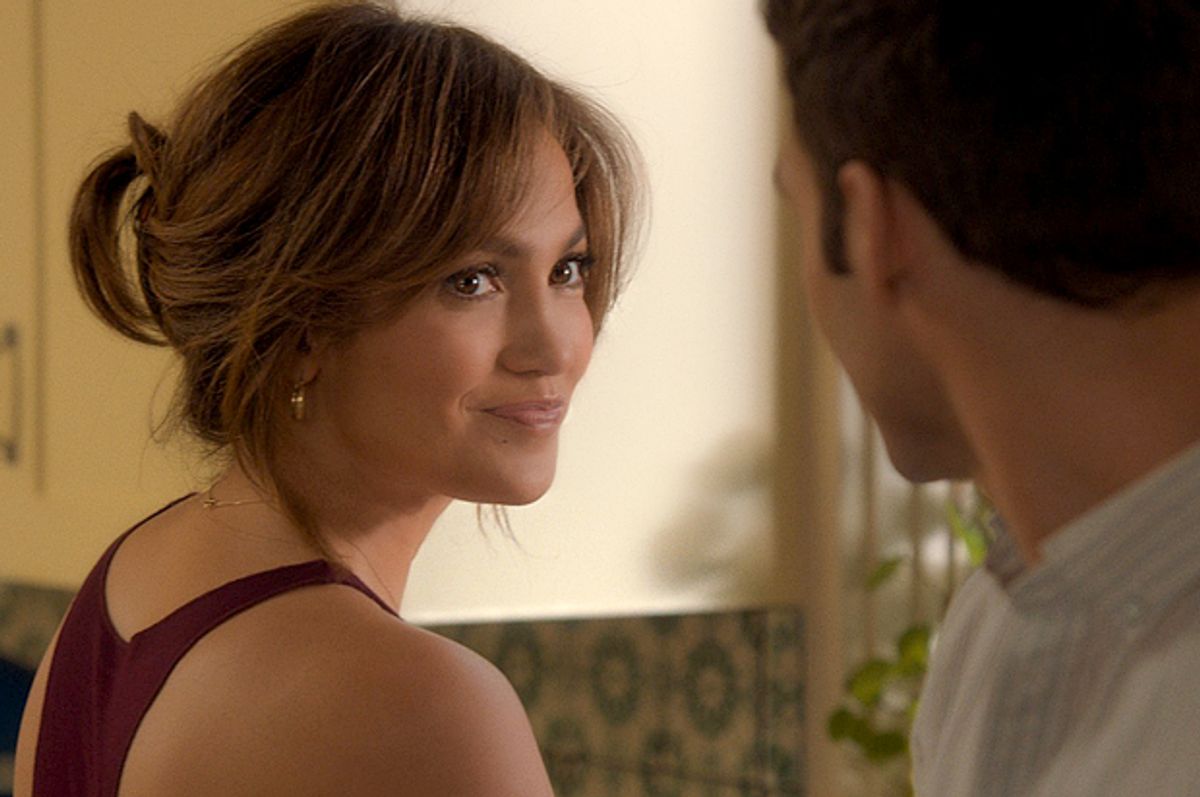 Jennifer Lopez in "The Boy Next Door" (Universal Pictures)
--

It’s no surprise that “The Boy Next Door,” a would-be erotic thriller produced by Jennifer Lopez in an effort to nourish or sustain her movie-star career, turns out to be terrible. But there are many grades of terrible in Hollywood, and this is pretty nearly the worst. I watched this with a packed New York preview audience that snickered all the way through the movie, and I’m glad they were able to find some amusement in the wretched, rootless overacting, the script written by aliens with no understanding of human psychology or sexuality or entertainment conventions, and a ludicrous setup that features Lopez as a high-school teacher who favors “the classics,” but seems to have no clear idea what that term signifies. (At one point she is given an embossed hardcover copy of “The Iliad,” which she pronounces, without opening, to be a “first edition.” It looks good for a 3,000-year-old book! Is it signed by the author?)

But for my money “The Boy Next Door” goes well beyond unintentional humor into grotesque catastrophe, and finally into something more like sadness. This seems to be one of those cases where a celebrity performer has no trusted adviser forceful enough to tell her that a self-generated project was not working out quite as well as we had hoped, and that everyone involved needed to be bribed into silence and all cameras and files destroyed and shipped to landfills in Uzbekistan. Lopez has always been a limited screen performer in the best of circumstances; she needs a savvy director, a strong male co-star and a well-defined script to appear to her best advantage. If her role opposite George Clooney in Steven Soderbergh’s “Out of Sight” is the obvious example, more generic exercises like the rom-com “Maid in Manhattan” (with Ralph Fiennes) or the thriller “Parker” (with Jason Statham) look a lot rosier in retrospect than they did at the time. Compared to this atrocity, those forgettable but somewhat competent films are pretty much the collected works of Billy Wilder.

What we have here is the unpleasant spectacle of a bad swimmer, for whom most of us feel a vague cultural affection, floundering in a bottomless pool full of sharks. Lopez’s character, a quasi-single suburban mom named Claire Peterson, bears little relationship to a real person, which isn’t necessarily a fatal flaw in a thriller. But director Rob Cohen and writer Barbara Curry utterly fail to create any sort of compelling artificial universe in which Claire and her problem – that being the hot 19-year-old lunkhead next door, played by a 27-year-old model and martial-arts fighter named Ryan Guzman – might make sense. Cohen is exactly the wrong sort of dude to help Lopez rescue her star career; he’s one of those Hollywood lifers who has lots of production credits, knows how to navigate the system and conspicuously doesn’t give a crap. The high point of his directing career is no doubt the first “Fast and the Furious” movie, back in 2001 – and while I won’t claim to have done a comparative study, that’s probably the third or fourth best film of that illustrious series.

Claire has a wispy, almost featureless son named Kevin (Ian Nelson) and is not quite divorced from bluff, cheatin’ husband Garrett (John Corbett). Her supposed best friend is the vice-principal of her school, Vicki, played by Kristin Chenoweth (of “Glee”) as a remarkably unappealing assemblage of middle-aged female stereotypes, simultaneously fragile, mean and slutty. So when Claire starts blatantly checking out the ass of muscular Noah (Guzman), who has moved in with his geezer great-uncle next door under the kind of mysterious circumstances that come with an almost visible asterisk floating in the air (the footnote says, “to be explained later as a totally surprising plot twist”), we don’t entirely blame her. It’s hard to say what seems least plausible about Noah: That he’s still in high school, that he’s also interested in “the classics” or that he wears a wussy little inch-wide woolen tie in several scenes. Were they giving that away with the bodybuilding supplements at GNC or something?

Vicki drives Claire toward the solace of Noah’s Homeric-epithet forearms by dragging her on heinous double dates with douchey guys who mock her for being an English teacher (or rather a teacher of “classics”). But as this agonizing exercise dragged on I felt more and more sympathy for the douchey double-date guys, who at least own their small-mindedness. The movie’s depiction of Claire as a “smart girl” depends entirely on one or two shots of Lopez in fashionably oversized spectacles. Those shots pale, by the way, compared to the immense effort expended to reflect the light of the sun, the moon and many distant nebulae off Lopez’s lips, which glisten with an unholy, prismatic sheen.

I realize this is pedantic, but Cohen and Curry and Lopez and everybody else who worked on “The Boy Next Door” clearly have no idea that for the past century no one accredited to teach “The Iliad,” not even a hot high-school teacher in Southern California, would present Homer as an individual author who wrote these big-ass poems. (“Homer is a genius,” announces Noah, prancing through Claire’s kitchen in that weird little tie, with what is presumably meant to be a lubricious expression. Again, to belabor the point: Not something someone who had actually read Homer would say!) It all fits, I guess, with the random objects in Claire’s classroom: A bust of Shakespeare, a Russian icon, a photograph of the Aztec calendar stone. Classics.

Of course none of that matters, and this would still be a terrible movie if Lopez had learned to read Greek for the role. Have you noticed I haven’t supplied a plot synopsis? Well, here it is: Claire sleeps with Noah, naturally enough (and I became momentarily engrossed in trying to figure out which shots were Lopez and which a body double). Then he goes all “Fatal Attraction” on her, and this totally slipshod and unconvincing movie takes a radical left turn into gruesome violence, including an apparent reference to the story of Oedipus, which screenwriter Curry has perhaps read, or heard about, even if she never got to “The Iliad.”

I guess the Homeric screw-up sticks in my craw because three minutes on Wikipedia could have cleared it up. That amply testifies that no one even pretended to give a crap, that all these supposed movie professionals signed up to work for Jennifer Lopez and cashed her checks and treated the whole thing as flushable and forgettable. Maybe she deserves to wear this folly and failure – I wouldn’t know and don’t much care. But the shame involved in inflicting this unwatchable disaster on the public, and in exposing Hollywood at its most venal, stupid and corrupt, goes much wider than one deluded star.