"Your dream is to go to Barnes and Noble?": Why HBO's "Togetherness" is TV’s most honest version of adulthood

Even as "Togetherness" retreads familiar territory, it's a groundbreaking portrayal of what it means to grow up 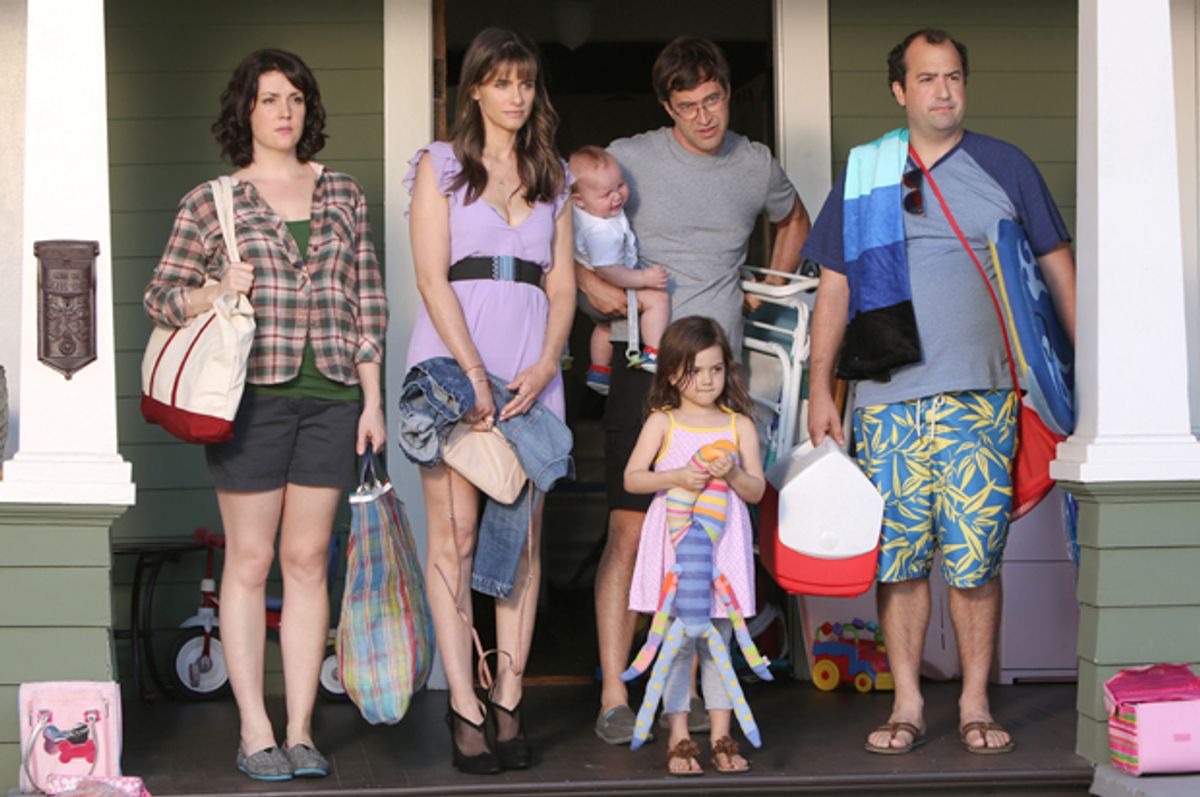 There’s something on HBO’s new show "Togetherness" that we see far too seldom on television: adulthood.

It’s not finding-yourself-life-is-a-mess 20-something adulthood, or single-and-dating 30-something adulthood, or career-full-throttle-life-in-your-40s adulthood, or even the soap opera version of adulthood filled with sex and intrigue and the occasional murder. This is plain, normal adulthood: the kind of late-30s malaise that settles in with the realization that life is not at all what you imagined it would be (no laugh track here) and that no one has any idea what they’re doing.

The show is mumblecore to its bones and it’s within that framework – sparse, naturalistic – that "Togetherness" finds both its uniqueness and its bigger truth (that truth being grown-up life). The setup, the premise, the issues are nothing new; we’ve all seen TV marriages go awry. But those elements -- mixed with wry acting and subtle humor, presented as a monochrome look at the subtleties and routineness of daily lives -- make  it feel like the most honest depiction of adulthood we’ve seen in ages.

The series revolves around four main characters living in L.A. The anchor is a married couple: Brett (Mark Duplass, one of the show’s creators) and Michelle (a truly amazing Melanie Lynskey) with two young kids. Brett and Michelle have opened their home to Brett’s best friend Alex (played by Steve Zissis, another of the show’s creators) and Michelle’s sister Tina (Amanda Peet) — and the four are now living together under one roof. All four are in some way stuck. All four are grown humans whose lives just haven’t unfolded as predicted, and they’re now at a crossroads, waiting to decide if they'll accept the types they’re on their way to becoming or if they'll shake it all up, burn it to the ground and start again. Tina starts the series newly dumped and dealing with a failing bounce-house business. Alex is an actor whose career just sputtered until it stalled. As for Michelle and Brett, they are bored. Their sex life is nonexistent, their marriage rote. If you'll forgive the inevitable comparison, it's a bit like if the ladies of "Girls" woke up 10 years older with none of those pie-in-the-sky dreams having come true, only to realize each day looks shockingly like the last. As Michelle says in one of the early episodes, “Every part of my day it’s like, I know what it’s going to look like.”

One of the struggles of talking about "Togetherness" is how very little happens. It’s a small show about small lives, but that intimacy is one of its best qualities. Even the characters' dreams have scaled down to echo the scope of their lives. In one episode toward the middle of the season, Michelle asks Brett what he would do with a free afternoon if he could do anything. “Barnes and Noble,” he says. “Third floor. Green leather chair. I’d get a peppermint tea and an original copy of 'Dune,' and nobody would know where to find me. I’d be all by myself.” Michelle pauses and then replies. “Your dream is to go to Barnes and Noble by yourself?” It’s a moment that reveals their differences, and perhaps his sadness, but it’s also a moment that shows the moment of time they’re smack in the middle of. The dream isn’t something out of the realm of possibility – the dream is the ordinary, it’s quietude, it’s the self.

Skeptics are saying that "Togetherness" is merely re-covering topics we’ve seen a million times over. They’re saying that we all know what it looks like when middle-class white people begin to fall apart. And undoubtedly there are similarities to shows like "Married" or Jennifer Westfeldt’s film "Friends With Kids." But there is something very different too. One: The show is genuinely good. Two: There is zero polish to it and zero imposed opinion. There’s no spin. Your sympathies are shared between characters, and you feel and understand each of their wants. It’s not life done well, or craftily, or even right. It’s just life, and it’s that simplicity — those daily shifts that make life happen — that breaks ground.

As the season progresses, the show matures and the characters begin to change. They all make decisions about the directions they want their lives to take, and those choices feel honest. For all eight episodes of season 1, "Togetherness" perfectly straddles the dramedy lines, but such is life — some moments make you cry-laugh and others just make you full-on cry. The characters on "Togetherness" are just people — parents, friends, siblings — figuring out how to navigate situations that nobody prepares you for, like how are you actually supposed to take care of children and keep your relationship afloat and have meaningful friendships and a fulfilling career? It’s a show about learning that adulthood means there's nobody to help you figure out what to do, even when you’re together.