This woman had to abandon her storefront to work at home. It's hard not to feel for her -- except for this (Update) 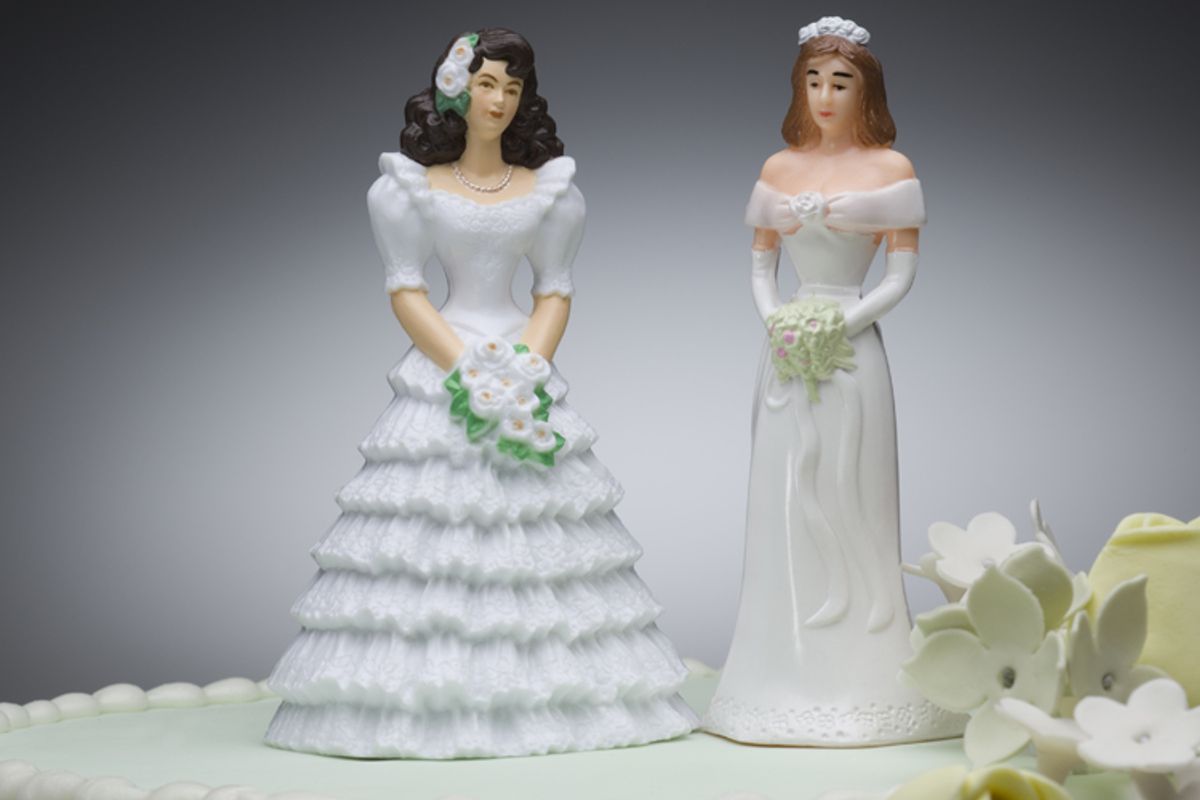 Melissa Klein loves making cakes. A soft-spoken young woman, Klein used to operate Sweet Cakes by Melissa out of Gresham, Oregon. But in September, she and her husband abandoned their storefront and started working out of their home. They left a sign hinting at the reason why: “Your Religious Freedom is becoming not Free anymore.” (Apparently, Melissa is better at baking than grammar.)

You see, Melissa can’t make cakes for gay people because she’s a Christian, and is facing a $150,000 fine for refusing service to a pair of lesbian brides-to-be. She described her passion for straight-baking at the most recent Values Voters summit.

"For me personally, when I would sit down with [straight clients], I just would want to know everything about her wedding," she told the audience, her voice trembling. "I'd want to know about the flowers, her dress, the centerpieces, her colors, the way her hair is going to be. I would even want to talk about 'where are you going on your honeymoon?'" she said, breaking down in tears.

It’s hard for anyone with any sort of empathy not to feel for Melissa. That is, until you’re reminded that she could have avoided this whole mess simply by baking a goddamned (literally, I suppose) cake. It’s not as if the couple asked for a graphic, confectionary sex scene, and I’m pretty sure Saint Peter wouldn’t hold her up at the gates of heaven. “Sorry, I see you baked a cake for a gay wedding in 2014. Down you go!”

Or until you realize that she and her husband are so fearful of us homo-nazis that they’ve chosen to close shop rather than risk having a pair of scary dykes or sodomites come through the doors.

Or until you stop to think about how humiliating and degrading it would be to be refused service because of your sexual orientation as you plan your wedding day.

Those claiming religious persecution might perceive gays’ demand to be treated equally in the marketplace—including when they are planning their wedding—as a new attack on religious rights, but it is actually a long-standing conflict embedded in democratic systems. The religious freedom granted by the Constitution is not absolute, but coexists alongside a secular civic code that seeks to ensure all members of society—Christians, Muslims, atheists; gays and straights—are treated with respect and dignity as they move through society. For all the protections and benefits our system of government offers, one of the trade-offs is that religion must be subservient to our civic code. This, of course, limits the types of religious practices that are allowed in America. A religion that requires you to murder non-believers, for instance, is not allowed. But that’s our constitutional arrangement.

At heart, what the religious right is asking for with its “religious liberty” campaign is to rewrite our secular code to allow the practice of refusing service to members of society for no substantive reason other than to express moral disapproval. They are unlikely to succeed. That’s because this is a debate we’ve already had and settled. Religious groups that saw black subservience as biblically ordained fought  abolition, and then integration, tooth and nail. Pastors quoted passages about the separation of the races and claimed treating whites and blacks equally was an affront against God and their freedom.

As a society, we decided, after more than a century of wrangling, that our civic code required citizens to treat each other equally in the arenas of commerce, housing and public accommodations—even if your religion says you don’t have to, or that you shouldn’t. This posed religious racists with a choice: water down your beliefs or live in a state of constant aggrievement. Then as now, people claimed this was an imposition on religious practice, which is, strictly speaking, true. But because most of us would prefer to live in a society where you don’t have to worry about being discriminated against on account of your race rather than one that protected religious racists, they lost the debate.

Newly emboldened by gains in the midterm elections, conservative Republicans in states like Virginia and Georgia have once again sought to advance “religious liberty” bills that would allow business owners to refuse service to members of society if doing so would violate their beliefs. The problem with these bills is that it’s impossible to write them in a way that doesn’t also uphold the right to discriminate against people on the basis of race; you either have to use broad language to write the bill so it can’t be construed as singling out gay people, or specify that all other forms of discrimination are bad except discrimination against gays.

These attempts to write prejudice into our civic code will fail. We long ago decided the mantle of religion does not override our basic duty to be decent to one another.

Update, 1/26/15: This post initially indicated that certain religious groups fought slavery; in fact it was abolition they fought. We have updated the post accordingly.