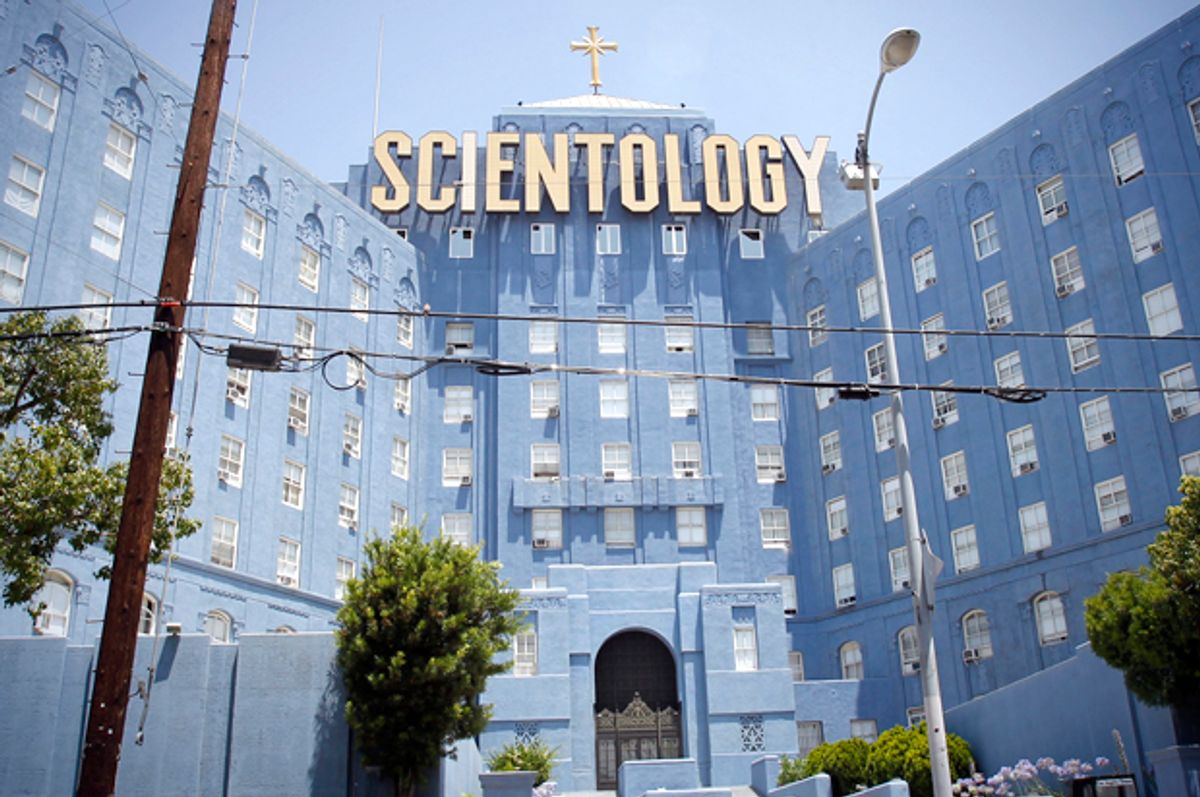 There were reports of crazy lines to get into the Sundance premiere of “Going Clear" last night, Alex Gibney's new HBO documentary about the Church of Scientology. While we haven't seen the movie, we're confident that the buzz is well deserved. The film is based on New Yorker writer Lawrence Wright’s 2013 book "Going Clear: Scientology, Hollywood & The Prison of Belief," a masterpiece of in-depth reporting packed to the brim with insane details and shocking revelations about the shadowy organization that L. Ron Hubbard founded. The film doesn't premiere on HBO until March, but in the meantime, here are some of the most juicy tidbits from the book you can look forward to hopefully seeing onscreen:

1. L. Ron Hubbard’s personal affirmations
One of the most interesting aspects of the book is its exploration of L. Ron Hubbard's fascinating and disturbing inner life. As Wright explains, "The tug-of-war between Scientologists and anti-Scientologists over Hubbard’s biography has created two swollen archetypes: the most important person who ever lived and the world’s greatest con man.” Particularly revealing are the excerpts culled from an autobiographical document by L. Ron Hubbard called "The Affirmations" or "The Admissions," a book whose legitimacy the church disputes. These range from fairly normal self-help stuff to unhinged reassurances about reptiles in his bed. Examples: "You will live to be 200 years old," "You have no fear of what any woman may think of your bed conduct. You know you are a master,” “You can read music,” “Snakes are not dangerous to you. There are no snakes at the bottom of your bed."

2. "Scientology Jail"
Wright's book depicts Scientology as a brutal and totalitarian organization, complete with a Rehabilitation Project Force (RPF)—essentially, a Scientology jail where wayward Scientologists are made to do heavy labor while they undergo “rehabilitation." Prisoners in RPF wear rags and eat scraps, are separated from their children and loved ones, and are subjected to something known as a “blow drill” if they try to escape. It is unbelievable and horrifying.

3. Operation Snow White
The extent of the church's covert operations are likewise often too shocking to believe. Wright details a church operation known as Snow White, beginning in the 1970s, wherein the Guardians Office, the church's intelligence agency, infiltrated 136 government organizations across the globe. In the U.S. alone, they penetrated the IRS, the Treasury, the Labor Department and the Federal Trade Commission, as well as newspapers including the Washington Post. “Nothing in American history can compare with the scale of the domestic espionage of Operation Snow White," Wright writes.

4. Hollywood intrigue
The fascinating “TC and COB” chapter focuses on the church’s wooing of Tom Cruise, their distrust of Nicole Kidman and their hunt for a new mate for Scientology's golden child. Even though it's not new, the extent of Cruise's commitment is astonishing. In one passage, he sits in a Home Depot parking lot doing "tone drills," where he tries to intuit the emotional state of random people exiting the store. As Wright puts it, "No other member of the church derives as much material benefit from his religion as Cruise does, and…none bears greater moral responsibilities for the indignities inflicted on members of the Sea Org, sometimes directly because of his membership." Other important Hollywood figures like John Travolta, Kirstie Alley and Paul Haggis are also major characters in Wright's story.

5. How insanely science-fictiony it all is
At this point the origin details of Scientology are well-known: 75 million years ago, Xenu, tyrannical leader of the Galactic Confederacy, brought aliens and stacked them around volcanoes before blowing them up, releasing "thetans" that later attached to human bodies. Still, the fact that this is a deeply held religious belief and not just a "South Park" parody never ceases to astonish.