GOP amnesty paranoia erupts: How a border security bill is roiling the right

House GOP leaders want to pass a tough border security bill. But conservatives see it all as part of an evil plot 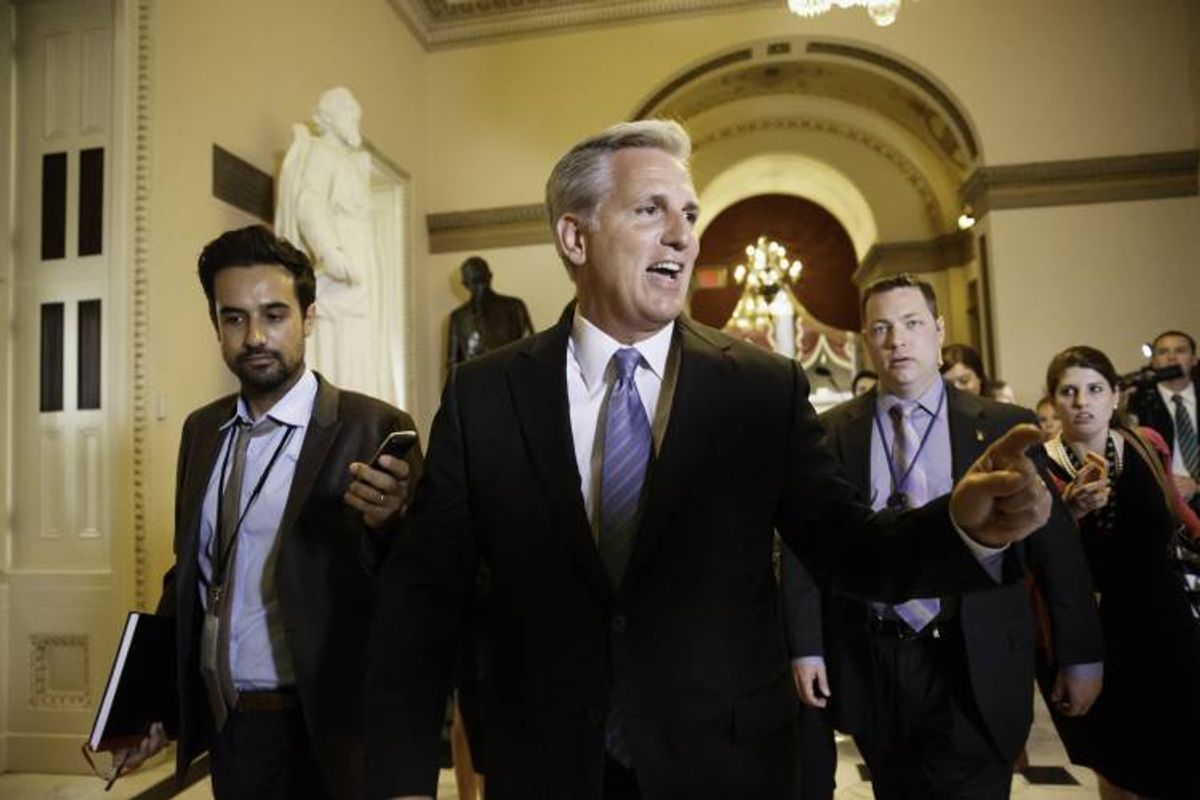 The winter storm that was supposed to pummel the Northeast thoroughly #disrupted the House's exhausting 2.5-day workweek plan. The House was originally going to vote Monday night through Wednesday before Democrats go on their retreat later in the week. That means votes that had been scheduled for Monday will move to either today or Wednesday, and certain votes scheduled for Wednesday will be pushed back indefinitely.

Cynics might say that since Washington was only expected to get about an inch of snow, they could probably have managed to squeeze everything in before the end of Wednesday, and maybe the only reason they didn't is because one of those votes originally scheduled for Wednesday was in Trouble.

House majority leader Kevin McCarthy has pulled that high-profile measure in question, the Secure Our Border First Act, from the Wednesday schedule. No word yet on when the vote for this border security bill will be rescheduled -- most likely McCarthy was hoping that the blizzard would destroy human civilization once and for all so he wouldn't need to worry about it anymore. We prayed for the end times too, brother.

The Secure Our Border First Act is a funny bill. It does funny things in the service of funny goals which, if not met, will bring funny consequences. It throws a whole bunch of money at the border for "completin' the danged fence" and so forth. Fine. But then it offers rather stringent metrics by which to measure success. It "would require the secretary of Homeland Security to gain operational control of the border's high-traffic areas within two years and of the whole Southwest border within five years." (Not the Homeland Security secretary personally; no human has that kind of wingspan.) The key is in how it defines "operational control": not at, say, a ~90% apprehension rate, the sort of still difficult-to-meet number that the Gang of Eight bill set as a target. This House border security bill would define "operational control" as "preventing all unlawful entries." As in, 100 percent of all border crossings. No more border crossings ever within two to five years!

And if that insane standard isn't met, then... then... well, then the DHS secretary and his cronies will have to hitchhike everywhere, like suckers.

The border bill would require DHS to have the southwest border under "operational control" in five years. If the department fails at that objective, the legislation dictates that political appointees at the agency cannot travel in government vehicles, be reimbursed for nonessential travel, or receive pay increases or bonuses.

Rep. Mike McCaul, the Homeland Security Committee Chairman, calls it the "the toughest border security bill ever before Congress." Grrrr! Conservatives love tough! But they don't think this bill is tough enough. That's right: the bill that requires an end to all illegal borders crossings, ever, is considered too namby-pamby for the right flank. They'd have a case if their concerns were that the listed consequences -- make DHS appointees' lives inconvenient! -- were silly. But that's not the problem.

Some, like Sen. Jeff Sessions, the top anti-immigration guy in the Senate, are worried that this "border security" bill leaves President Obama too much wiggle room to release apprehended undocumented immigrants. (McCaul responded that Sessions' concerns are an issue for the House Judiciary Committee to set about resolving. "Such objections," National Journal reports, "have Republicans and Democrats alike privately musing that this is the exact reason leaders had sought to rework the immigration system in a comprehensive manner.")

Other conservatives see the border security bill as a trap: that it's the measure Boehner and the leadership will try to sell conservatives in exchange for their votes funding the Department of Homeland Security. As in, it's what they'll go to once legislation to undo the president's executive actions has been either filibustered or vetoed. That sounds... exactly correct, yeah, to be honest. That is exactly what John Boehner is trying to do.

But the most interesting concern is more about the long term: that GOP congressional leaders only want to pass a border security bill so that they can then get moving on their real goal, which is Total Amnesty.

Conservative critics don't trust GOP leaders and fear the border security bill would be used as an excuse to move other legislation allowing more immigrants into the country to work and providing legal status for those already here.

"Consider the title: Secure Our Border First. First before what?" said Jessica Vaughan, director of policy studies at the Center for Immigration Studies. "Before we move on to the amnesty and expansion of guest worker programs that appears to be the real priority for top congressional Republican leaders?"

Conservatives don't have any reason to worry about GOP leaders bringing up an "amnesty" vote anytime in the forseeable future. That's just not happening. Look around.

But the consensus GOP leadership line on immigration, for the past year or two, has been: First we need to secure the border. Then we'll consider what to do with the 11 million who are already here.

This border security bill could be interpreted as the leaders trying to implement that first step. The second step, of course, is to just do nothing about the 11 million here. (That's another reason why Democrats insisted on resolving all of this comprehensively. If you give Republicans everything they want in exchange for nothing, that's legislative malpractice.) And border security bill gives the GOP the excuse it would for never moving onto step two: it sets the impossible goal of a 100% apprehension rate that can never be met.