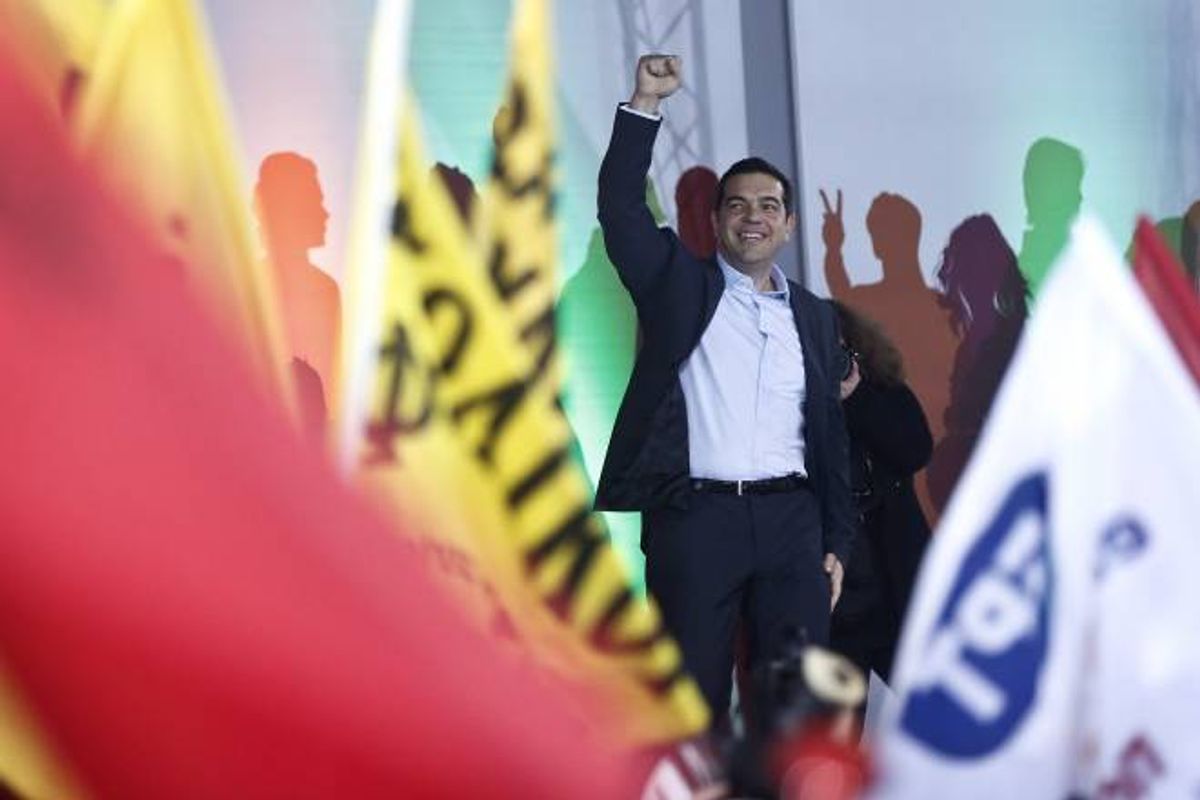 Alexis Tsipras, leader of Greece's Syriza left-wing main opposition party waves to his supporters as he arrives for a pre-election speech at Omonia Square in Athens (AP Photo/Petros Giannakouris)
--

If you live in the northeastern United States, you already know that a nor’easter was supposed to come — one whose ferocity, we were warned/promised, would rival that of any other in recent history. According to Mayor Bill de Blasio, New Yorkers had to “prepare for something worse than we have seen before,” and must not “underestimate” Mother Nature’s impending wrath. The amount of snow in many areas fell well short of expectations, but it was all very dramatic, especially if weather-related apocalypses are your thing.

If any of the billions of humans who live outside the eastern coast of the United States were sad to miss the Great Blizzard hype of 2015, though, they shouldn’t get too gloomy: They’ll soon get to pretend they’re living during humanity’s final hours, too. Because before there was allegedly a wall of white heading toward the northeast corridor, there was an election in the faraway land of Greece that left Syriza, the country’s premiere leftist party, standing as the undisputed winner. And according to some of the more hysterical commentary from the American right, and some of the least insightful reporting from the financial press, Syriza’s rise is yet another sign that the world is coming to an end.

Yet both doomsday scenarios are unlikely to live up to the media’s hype and the public’s expectations. The Syriza-induced apocalypse will likely fail to materialize because those who’ve predicted it are relying on myth, bad faith and ideology. And not only is that combination more unreliable than meteorological science (which already proved fallible), but it’s one that’s far less equipped to acknowledge and adjust when it’s been proven wrong.

But before we get into why the freakout over Syriza is so overdetermined and over the top, let’s quickly recap how we got to this point, as well as what the party’s success likely does (and doesn’t) mean for Greece and the eurozone more generally.

To grossly truncate and simplify a long and complicated story, ever since 2010, Greece has been trying to revive its economy and save its fiscal future by swapping loans from the I.M.F., the European Central Bank and the European Commission (a.k.a., the “troika”) in exchange for major economic reforms and severe austerity. Yet despite the promises from the troika and other stewards of the neoliberal global order, Greece’s time spent cutting public payrolls, raising taxes and gutting public services has not led to an increasingly confident private sector kickstarting growth. Instead, the country’s seen its economy shrink, its unemployment rate skyrocket, its government’s revenues decline and its citizens’ quality of life plummet. And its debt problem is arguably worse than it was before.

For years, the powers that be in Brussels and Berlin have watched in befuddlement as Greece, which is part of the eurozone, has unraveled. But as Paul Krugman argues in his latest column for the New York Times — and, indeed, has been arguing now for years — the failure of Greek austerity was absolutely something that policymakers could and should have seen coming. “If the troika had been truly realistic,” he writes, “it would have acknowledged that it was demanding the impossible.” Not only was there no historical example of austerity working for Greece, Krugman says, but a 2012 I.M.F. study found that there’s no historical example of a country paying down its debt via austerity, ever. “The program [EU leaders] imposed on Greece never made sense,” Krugman declares. “It had no chance of working.”

Unsurprisingly, the years of dysfunction and chaos in Greece’s economy have also led to the destabilization and radicalization of its politics, with the most obvious example being the meteoric rise of Golden Dawn, an honest-to-goodness neo-Nazi party. And because the desire to maintain the view from nowhere extends beyond America’s borders, there’s been a tendency among many less-sophisticated members of the media to fold Syriza into that same narrative, offering it as the left-counterpart to Golden Dawn. In the sense that the unceasing disaster of austerity has discredited both of Greece’s traditional centrist parties, and thus opened up a space for fringe parties to remake the mainstream, this is a defensible framing. But despite Syriza’s name, which translates roughly into “Coalition of the Radical Left,” the truth is that none of Syriza’s proposals are nearly as ambitious (or odious) as Golden Dawn’s vision of an immigrant-and-Jew-free future.

Of course, if Syriza were granted limitless power, I’m sure there’d be plenty of things its members would like to do that could be fairly described as revolutionary. But in the real world, Syriza has been able to achieve once-unthinkable levels of success largely because its program is so eminently reasonable. Not only is the party uninterested in bringing forth the dictatorship of the proletariat, but Syriza’s not even yet advocating for Greece to dump the euro, a move supported by an increasing number of economists but still resisted by the Greece’s voting public. Look beyond the headlines calling Syriza “far-left,” “radical left” and so forth, and you’ll see a party whose primary goals are to get some much-needed debt relief and to renegotiate its loans with the troika so the government can engage in some counter-cyclical spending. In both instances, Syriza isn’t trying to end capitalism and liberal democracy, but rather make both work for everyday Greeks.

Nevertheless, some of the more influential members of the financial media have put Syriza’s victory in terms that suggest its rising popularity is a Stalinist coup in the making, while U.S. conservatives have predictably responded by imply Syriza is a leftist Golden Dawn (and talking about Che Guevara). The worthlessness of the latter group’s analysis is hardly a surprise, obviously. But while the anxious response on the part of ostensibly sober-minded fans of neoliberalism is also to be expected, one hopes that the leaders of the troika and the EU can realize that, so long as Greece and other eurozone member-states are governed democratically, austerity’s “beatings … until morale improves” approach is untenable. Millions upon millions of people throughout the continent are well past the point of no return when it comes to giving up on the status quo.

Because if constructive, fundamentally reformist approaches like Syriza’s are nixed by elites, voters are going to see parties like Golden Dawn, and figures like France’s Marine Le Pen, as the only options left. And when the European far right gains power, the results can sometimes be truly apocalyptic.