This is how a police state protects "secrets": Jeffrey Sterling, the CIA and up to 80 years on circumstantial evidence 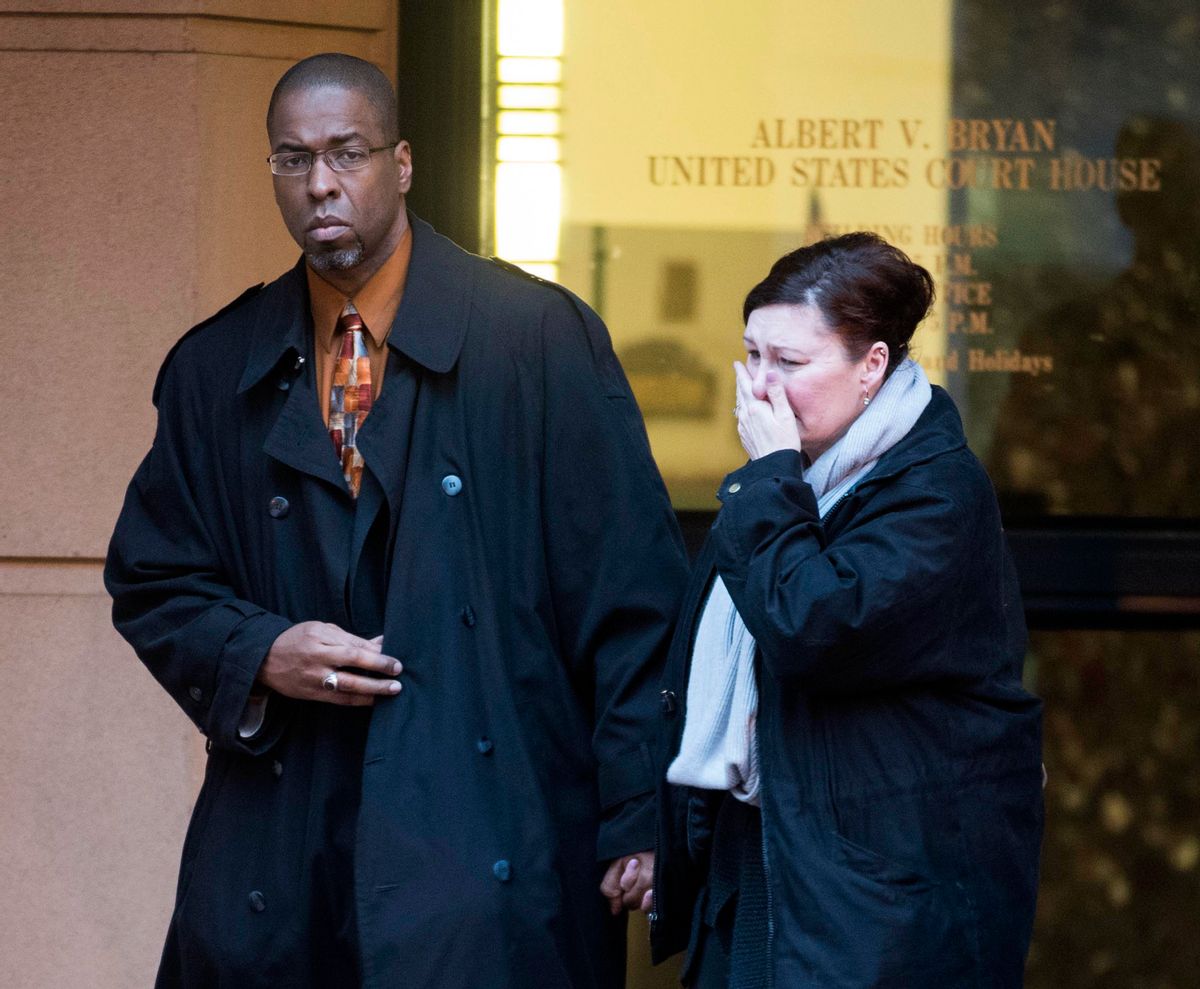 Former CIA officer Jeffrey Sterling leaves the Alexandria Federal Courthouse with his wife, Holly, after being convicted on all nine counts he faced of leaking classified details of an operation to thwart Iran's nuclear ambitions. (AP)
--

The participants in the economy of shared tips and intelligence in Washington D.C., breathed a collective sigh of relief when, on January 12, the government announced it would not force James Risen to testify in the trial of former CIA officer Jeffrey Sterling. "Press freedom was safe! Our trade in leaks is safe!" observers seemed to conclude, and they returned to their squalid celebration of an oppressive Saudi monarch.

That celebration about information sharing is likely premature. Because, along the way to the conviction of Sterling this week on all nine counts -- including seven counts under the Espionage Act -- something far more banal yet every bit as dear to D.C.'s economy of secrets may have been criminalized: unclassified tips.

To understand why that's true, you need to know a bit about how the Department of Justice larded on charges against Sterling to get to what represents a potential 80-year maximum sentence (though he's unlikely to get that). Sterling was accused -- and ultimately convicted -- of leaking two related things: First, information about the Merlin operation to deal flawed nuclear blueprints to Iran, as well as the involvement of a Russian engineer referred to as Merlin in the trial. In addition to that, the government charged Sterling separately for leaking a document (one which the FBI never found, in anyone's possession): a letter Merlin included along with the nuclear blueprints he wrapped in a newspaper and left in the mailbox of Iran's representative to the International Atomic Energy Agency. So the government convicted Sterling of leaking two things: information about the operation, and a letter that was used in the operation.

Then they charged Sterling for improperly retaining the letter (again, FBI never found it, not in CIA's possession, not in Sterling's possession, and Merlin purportedly destroyed his version before anyone could find it in his possession). Then DOJ charged Sterling for leaking the letter to Risen, then charged him for causing Risen to attempt to write a 2003 New York Times article including it, then charged him for causing Risen to publish a book chapter including verbatim excerpts from it (apparently Risen is a better investigator than FBI, because he found a copy): one letter, four more counts under the Espionage Act.

Altogether, seven counts of spying, for one leak.

Here's the really scary part though: the jury convicted Sterling based entirely on circumstantial evidence: there was not one shred of evidence showing Sterling handing Risen classified information on the operation, the Russian asset, or the letter that Risen found but FBI could not.

The evidence consisted of 57 phone calls between Sterling and Risen (some on their own phones, some on a phone Sterling had access to) between March 2003 and November 2005, the content of which we know nothing. It included a handful of emails, some of which indicate (in 2004, before Risen submitted his book proposal) Risen wanted to continue to talk to Sterling and wanted to send him something. One March 10, 2003 email, which Sterling deleted sometime in 2006, possibly after FBI subpoenaed him in this investigation, showed that Sterling had sent Risen the link to a CNN article claiming Iran had a very advanced nuclear weapons program. "All the more reason to wonder..." Sterling said in the email. The evidence showed that in March 2003, as the Bush Administration started a disastrous war based on claims of a dangerous nuclear program, Sterling used proper legal channels to raise concerns about the operation (citing "current events" to explain the timing of his concern) at the Senate Intelligence Committee.

Perhaps the most damning evidence, which was not submitted as a fact but as to the scope of the investigation, was CIA special agent Ashley Hunt's revelation that in the initial leak referral CIA relayed a warning -- from lawyers she would later learn were the lawyers handling Sterling's Equal Opportunity complaint -- that one of their clients had "voiced his concerns about an operation that was nuclear in nature, and he threatened to go to the media." In spite of this tip from the CIA, however, Hunt did not consider Sterling a likely candidate to be the leaker in the early stage of the investigation; she -- and CIA press seretary Bill Harlow -- thought Senate Intelligence Committee staffers were behind it.

The prosecution made much of the fact that Risen quoted from Sterling's performance review. Sterling had an unclassified version of it which he could legally share with Risen, but the prosecution claimed, dubiously, that an investigative reporter like James Risen would not be able to figure out the difficult asset the review referred to based on his own investigation.

Finally, the prosecutors made a great show of handing the jury three documents found at Sterling's house in Missouri, wrapped in red-striped folders marked SECRET. CIA's Chief of Litigation Support, Martha Lutz, testified the documents had been improperly classified originally, but she had reviewed them and now (retroactively, apparently) deemed them to be classified SECRET. On redirect, Sterling's defense attorney Edward MacMahon made it clear the documents instructed CIA officers how to dial into the CIA using rotary phones and that the documents dated to 1987. The government pointed to these documents about how to dial rotary phones as proof that Sterling would improperly bring documents about CIA's sensitive secrets home.

Apparently CIA considers what it did with rotary phones almost three decades ago a sensitive secret.

Meanwhile, Judge Leonie Brinkema did not permit the defense to reveal to jurors that several of the witnesses against Sterling had also brought classified documents home and -- considering that CIA found out about these without a search of their entire dwelling and retroactive classification -- probably legitimately sensitive ones.

In other words, while there is definitely circumstantial evidence against Sterling, no piece of evidence showed Sterling sharing classified information about the Merlin operation with Risen.

D.C. information brokers should be worried that Sterling faces 80 years in prison based off this circumstantial evidence. All the more so, given the evidence supporting the charge that Sterling leaked to Risen in time for and caused him to write the article Risen told CIA he had in completed draft on April 24, 2003. After all, the only pieces of evidence that the government submitted from before the time when Risen told CIA he had a completed article were the CNN email, phone calls reflecting Risen and Sterling spoke for four minutes and 11 seconds across seven phone calls, and Sterling's entirely legal discussion with staffers from the Senate Intelligence Committee.

No matter what you think all the later phone calls between Sterling and Risen indicate, short of evidence of a face-to-face meeting in this earlier period, the evidence seems to suggest Sterling was doing something that people in DC do all the time: point an investigative reporter to where she might find classified scoops, without providing those scoops themselves. That's especially true given the way the CIA's own notations about Risen's story seem to track the reporter fleshing out information, from initial outlines of the operation (that happen to map what Sterling told Senate staffers) to, weeks later, inclusion of that elusive document FBI never managed to find. That is, it appears Risen got a tip, possibly from Jeffrey Sterling, but that he spent weeks using his sources to flesh out that tip.

In both the indictment and discussions about jury instructions, the government interpreted the Espionage Act to cover what might be an unclassified tip through two means. First, they pointed to language in the Espionage Act that criminalizes someone "caus[ing secrets] to be communicated, delivered, or transmitted," and from that argued Sterling was responsible not just for the leak to Risen but also for the journalist's attempt to publish a newspaper article and his completion and his publisher's delivery to Virginia of a book chapter. Then, for most counts, they argued that Sterling did not have to have handed Risen secret information directly, he could do so indirectly.

If the jury found Sterling indirectly got secrets into Risen's hands and, from that, caused him to write an article and a book chapter on it (irrespective of the additional work Risen did, the work of his editors at the Times and the publishers at Simon and Schuster and the commercial freight company that carried those secrets in a bound book to Virginia), that was enough to send him to prison for most of the rest of his life.

The conviction of Jeffrey Sterling on all counts represents many things. But perhaps the most alarming is the principle that you can go to prison for having given an investigative reporter a tip that led him to chase down classified information about that tip and then publish it in an article or book.

That is, DOJ may have just succeeded in convicting someone for what is the lifeblood of all reporting on government secrecy: unclassified tips.