If they can imprison Barrett Brown, they can do it to anyone 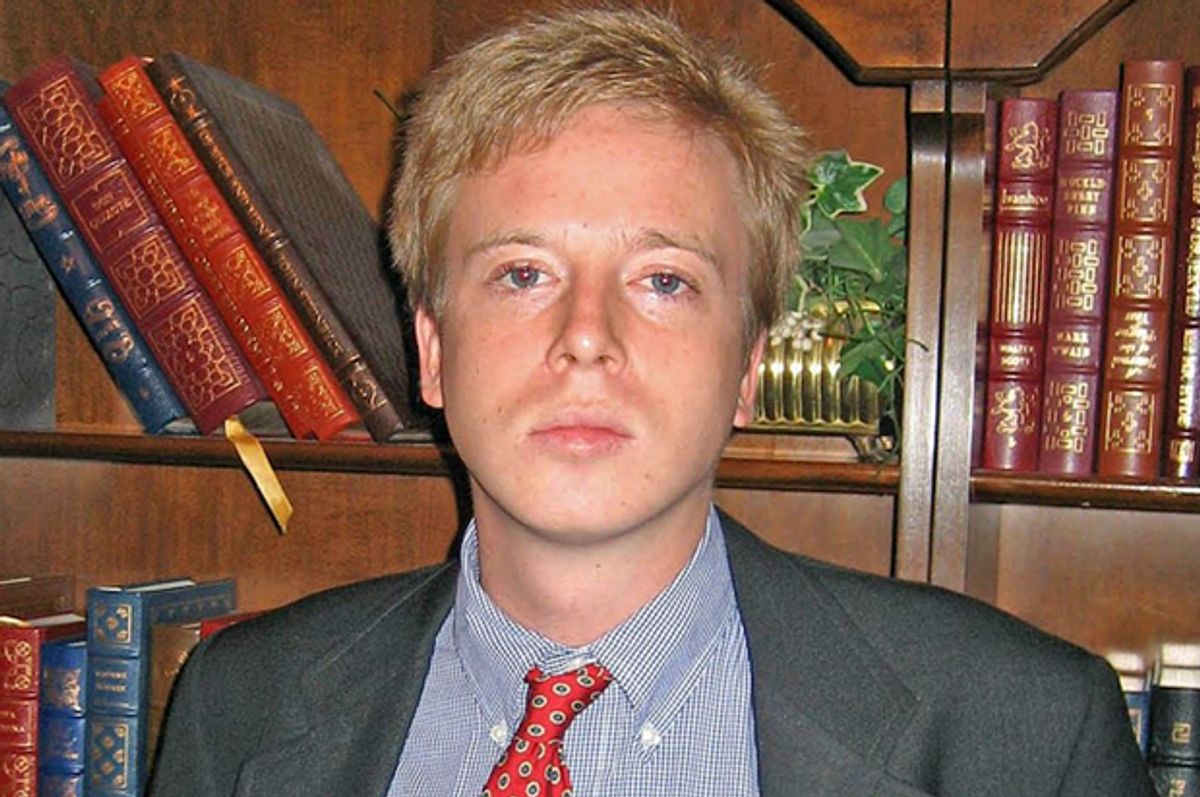 Maybe you don't care about the imprisonment of Barrett Brown. Maybe you'll never piss off a federal prosecutor, or get deeply involved with a decentralized hacker collective. Maybe you'll never share a link to a document dump that contains stolen credit card information, so the five year imprisonment of a journalist last Thursday isn't relevant to your day-to-day life. But there's something deeper at stake in Brown's wrongful arrest and conviction, and it should worry any American who cares about the freedom of press, the freedom of expression, and the freedom from unlawful prosecution or harassment at the hands of an increasingly paranoid and secretive state.

In 2011, Barrett Brown made a lot of enemies. In November of that year, he briefly fled his Dallas apartment after pissing off the infamously brutal Mexican drug cartel the Zetas. In May, his hacker collective-cum-open-source investigative team "Project PM," released an exclusive report on a public/private surveillance arrangement known as "Romas/COIN," which implicated private security firms HBGary Federal, Palantir, and Berico in a plot to hire out their surveillance technology —  established for use by sovereign nations — to corporations looking to infiltrate activist networks, spy on WikiLeaks members, and even harass journalist Glenn Greenwald, who was himself still eleven long months away from meeting Edward Snowden in a Hong Kong hotel room. On surveillance, particularly the role of private companies, Brown broke the story first. In December, members of Anonymous hacked into a private security firm called "Stratfor," an action that would set in motion the events that would eventually lead to Brown's arrest and imprisonment.

Anonymous wouldn't start leaking the incriminating Stratfor emails until the following February, but this time, the FBI had a man on the inside. One of the leaders of the Anonymous offshoot "Lulzsec" had been turned a confidential informant. That hacker, known as "Sabu", provided information against Brown and one of the more prominent hackers involved in the Stratfor leak, Jeremy Hammond. Just eight days after the first documents were dumped, the FBI executed search warrants on both Brown's apartment, and his mother's home. Laptops and cellphones were confiscated.

At the time, Brown was confident that the search was unfounded, telling Buzzfeed reporter Michael Hastings, "I suspect that the FBI is working off of incorrect information." But six months later, he was arrested anyway -- now on the questionable charges of posting a confrontational video on YouTube, in which he allegedly threatened a member of the FBI.

The prosecutorial zeal directed toward Barrett Brown was always a result what he was saying — and who he was upsetting — and never about the severity of his purported crimes. The chief complaint brought against Brown — later dropped as a condition of his plea deal -- involved sharing a link to a zipped file. The link pointed to a bunch of emails along with some credit card numbers. Brown was charged with trafficking in "stolen authentication features," which carried a potential sentence of over a hundred years

It's important to remember that Brown was hardly the only person linking to this cache of documents, and the credit card information was released by individuals over whom Brown could not feasibly exert control. But Brown, with his growing public profile and enthusiastic willingness to embarrass our national security apparatus and its defenders, became the obvious target.

On their own, the forces that conspired to put Brown behind bars for half a decade are not exceptionally dangerous. But taken together, a different picture emerges.

Start with a labyrinthine legal code, so large and unwieldy that academics, journalists, and politicians can't even effectively measure it. (And not from lack of trying.) In 1982, lawyers at the Justice Department spent over two years trying to arrive at a comprehensive figure — to no avail. Almost twenty years later, the American Bar Association gave it another shot, but they couldn't figure it out, either. Estimates range from as low as three thousand laws to as high as three hundred thousand laws. Some of that enormous disparity can be explained by semantics. The Drug Abuse and Prevention Act, for instance, centers largely on two offenses: possession and distribution. But running over 130 pages in length, it documents a wide range of felonies that could alternately be described as encompassing just two crimes or hundreds. Each act of Congress must be enforced by the relevant agency, and tens of thousands of laws — or perhaps hundreds of thousands? — are borne as the consequence. Why is any of this important to the case of Barrett Brown? In a nation where our government itself can't say how many federal statutes are on the books, how can any citizen be certain he or she hasn't run afoul of the law?

Indeed, we have criminalized so much of our day-to-day life that, according to one estimate, Americans commit something in the realm of nine hundred million crimes a day, so that state prosecutors have little choice but to pick the person and then find the crime — and not the other way around. This is arguably what happened to poor Barrett. After making the wrong enemies in our national security apparatus, FBI agents flipped Sabu into an informant and used his testimony to secure a search warrant of Brown's apartment. But it's important to remember that their search warrant bore no fruit; when they eventually arrested Brown six months later, it was on charges of allegedly threatening an FBI agent in an angry YouTube video. This is the definition of prosecutorial discretion, of leveraging the legal code to harass, intimidate, and silence critics of the state.

When combined with the billions that have been spent in recent years on the Best Surveillance State Money Can Buy, these are ominous trends. When each one of us owns multiple devices that detail, track, log, and store our actions, finding the crime to hang around someone's neck can be as simple as finding enough new places to look. Who doesn't have secrets? Who is perfect all the time? These devices are always with us, and due to the draconic nature of Digital Rights Management (DRM) laws, we often have little choice but to allow them to surveil us as they please, even after it's become readily clear that the microphone-slash-camera-slash-GPS tracking device-slash-bank account in our pocket has been infiltrated by the state's spies and spooks.

Law enforcement agencies across the land have been shown to eagerly use all these (utterly illegal, baldly unconstitutional) new surveillance tools to sniff out law-breakers — and then meticulously build separate "parallel constructions" toward a probable cause that might squeak past a backlogged judge. In 2013, Reuters broke the story of a special unit in the Drug Enforcement Administration tasked with bringing the details of state surveillance to local law enforcement — and instructing them to hide the information's real origin. As the Reuter's story notes, "Two dozen partner agencies comprise the unit, including the FBI, CIA, NSA, Internal Revenue Service and the Department of Homeland Security." The agents are "trained to 'recreate' the investigative trail to effectively cover up where the information originated".

In his alocution statement prior to sentencing last Thursday, Brown admits that he bears some measure of guilt for making himself such an easy target, acknowledging that he should never have made the YouTube videos that led to his original arrest. He notes that he was off Paxil and Suboxone at the time, but "that’s still me in those YouTube clips talking nonsense about how the FBI would never take me alive." But it's hard to shake the feeling that the FBI would have found an excuse to lock him up eventually. A system that gives prosecutors the power to target any individual is dangerous in the best of times, and, to put it mildly, these are not the best of times. We live in an era of unprecedented surveillance. The NSA is a fast-growing bureaucracy that has proven time and again unwilling to abdicate the power it has attained since September 11, 2001. Beyond being a secretive agency nearly immune from oversight, we've also created an organization that regularly abuses its extraordinary powers. This agency is almost comically sensitive to any attention or oversight, so perhaps it's unsurprising that law enforcement officials were so relentless in targeting Brown, who is so fearlessly critical of the state.

But Brown is unbowed. Immediately after sentencing, he released an aggressive, sardonic statement that reveals the real futility of this whole witch hunt; it's a hell of a lot easier to keep someone behind bars than it is to keep them silent.

"Good news! — The U.S. government decided today that because I did such a good job investigating the cyber-industrial complex, they’re now going to send me to investigate the prison-industrial complex. For the next 35 months, I’ll be provided with free food, clothes, and housing as I seek to expose wrongdoing by Bureau of Prisons officials and staff and otherwise report on news and culture in the world’s greatest prison system. I want to thank the Department of Justice for having put so much time and energy into advocating on my behalf; rather than holding a grudge against me for the two years of work I put into in bringing attention to a DOJ-linked campaign to harass and discredit journalists like Glenn Greenwald, the agency instead labored tirelessly to ensure that I received this very prestigious assignment. — Wish me luck!"

Let's wish Barrett plenty of good luck. This country will be much improved when he's a free man again, making new enemies with the profiteers of the "cyber-industrial complex" and their defenders in the state.