Lynch schools the wingnuts: How the right tried -- and failed -- to wound Obama's AG nominee

Republicans came armed to throw Loretta Lynch off her game. Here's how the president's nominee left them frustrated 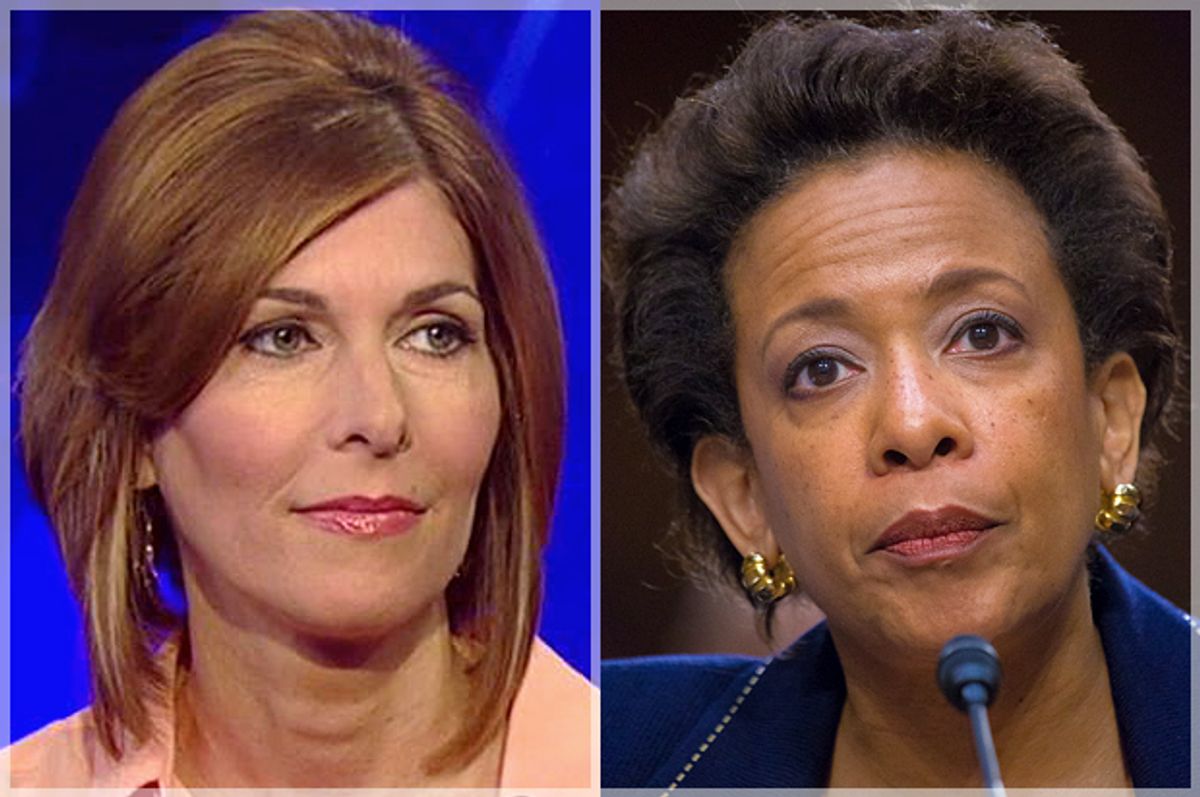 By all accounts Loretta Lynch, president Obama's choice to replace Eric Holder as attorney general, was very impressive in the first day of hearings. In fact, she was so impressive that even the right-wing bloggers at Powerline called her the Ernie Banks of nominees, which, judging from their eulogy for the real Ernie Banks, is very good indeed. But then they also said the committee was throwing softballs, so the metaphors got a little confusing.  It was a very good day for Loretta Lynch, much to their chagrin. She was appropriately confident, dignified and boring and thus made for a dull affair that was unlikely to derail her nomination.

The second day of hearings, in which both Republicans and Democrats on the committee invited both people to testify, was a little bit more lively. We knew it would be when the committee announced their guests. The Democrats offered a group of former colleagues and law professors. The Republicans offered a couple of conservative law professors to denounce President Obama's usurpation of democracy --- and some far-right-wing activists to complain about being victimized.

The first person to testify was someone who had never met or had any knowledge of Loretta Lynch. This was former reporter and current right-wing icon Sharyl Attkisson who told a harrowing story of harassment, including her questionable allegation that the government bugged her computer, obviously shocking the likes of Chuck Grassley and Orrin Hatch to the depth of their souls. It's one thing for the government to relentlessly pursue reporters like James Risen who report serious and important stories. They wholeheartedly support the Justice Department in such cases. Attkisson, however, resigned from CBS News because she felt the entire network was biased in favor of the Obama administration and refused to allow her to pursue the scandals she just knew were there. (These were scandals like Benghazi and Fast and Furious -- scandals that have been investigated approximately 756 times under every committee in the Congress and have turned up zilch.) Somehow they've managed to morph this professional dispute into a story of Attkisson being victimized by the authoritarian police state.

It would have been interesting to hear testimony about the government's pursuit of leaks and reporters over the past few years, which really is a scandal and which should form the basis of questioning for the new attorney general. But since both parties are generally in favor of this practice, that wasn't to be. Instead the Republicans called one of their celebrity martyrs to testify about how hard it is for a conservative to live in this world.

The next activist they called to testify about Loretta Lynch was a man who admittedly has absolutely no knowledge of her but had something to say about how Eric Holder was very mean to police officers around the country. He is an African-American sheriff from Wisconsin named David Clarke who up to this point is best known for his appearances on "Fox and Friends" in which he says things like, "the NAACP is nothing more than a propaganda entity for the left" and that the behavior of black people is the reason they are getting shot so often. He suggested that the federal government is waging a war on police and should butt out of local business.

The final activist of the day was a citizen who has been working her heart out trying to protect our electoral system from the scourge of nonexistent voter fraud. That would be a woman named Catherine Englebrecht, who runs a far-right-wing group called True the Vote, which sends out groups of "observers" to African-American and Hispanic polling places to make sure they're not stealing the votes of decent Americans. Upon Eric Holder's resignation, her group put out a press release stating that Holder had carried out a "radical, racialist assault on voting rights." She was there to complain about the Department of Justice failing to immediately interview her over the alleged IRS scandal and to excoriate them over the "nightmare of citizen targeting." She then testified that Loretta Lynch was wrong in saying that laws had been passed throughout the South to prevent some people from voting. Sen. Jeff Sessions pointed out that an Alabama Tea Party leader had been victimized by the IRS and nobody at the IRS cares. Sen. Orrin Hatch expressed his deepest sympathy for what she's been through and assured her that they were going to get to bottom of it. Her voice cracked with emotion as she said, "Thank you, sir."

This was the first committee hearing of the new Senate Judiciary Committee under GOP rule, a hearing to determine the fitness of a presidential nominee to the most powerful law enforcement office in the land, and they called a group of partisan crackpots and grass-roots loons to relitigate moldy pseudo-scandals and complain about nonexistent government persecution. And it's not as if they couldn't have found some real scandals to talk about. The Obama Justice Department is hardly perfect. But they are married to their Foxified version of reality and simply can't see the forest for the trees.

The whole spectacle was a nostalgic trip back in time to the days of Clinton madness when the judiciary committees were able to leverage any public hearing into a scandal fest. The press seems less inclined to go along these days, a fact that Sharyl Attkisson would surely attribute to its political bias. But the truth is that these "scandals" are just sad echoes of the scandal-mongering of the 1990s. The energy is gone, the issues seem pale and lifeless. Not that there was ever any "there" there, but they are now just going through the motions.

But I hope Democrats don't get too complacent. President Obama has never been able to get their scandal mojo rising. But there's every reason to suspect that this is just an off-season workout for what they see as a return to the big leagues. If Hillary Clinton wins the presidency you can be sure there will be a return to the fiery investigations whenever the Republicans hold either house of Congress. And if history serves, the press will likely be eager to join the team.

But this sad little show reveals just how much they are in need of some spring training. Loretta Lynch may be a genial public servant in the mold of Ernie Banks, but when it comes to scandal management, Clinton is Babe Ruth. They are going to need to up their game significantly.