I was an American sniper, and Chris Kyle’s war was not my war

Don’t make the mistake of thinking the hit movie captures the truth of the Iraq conflict. I should know. I lived it 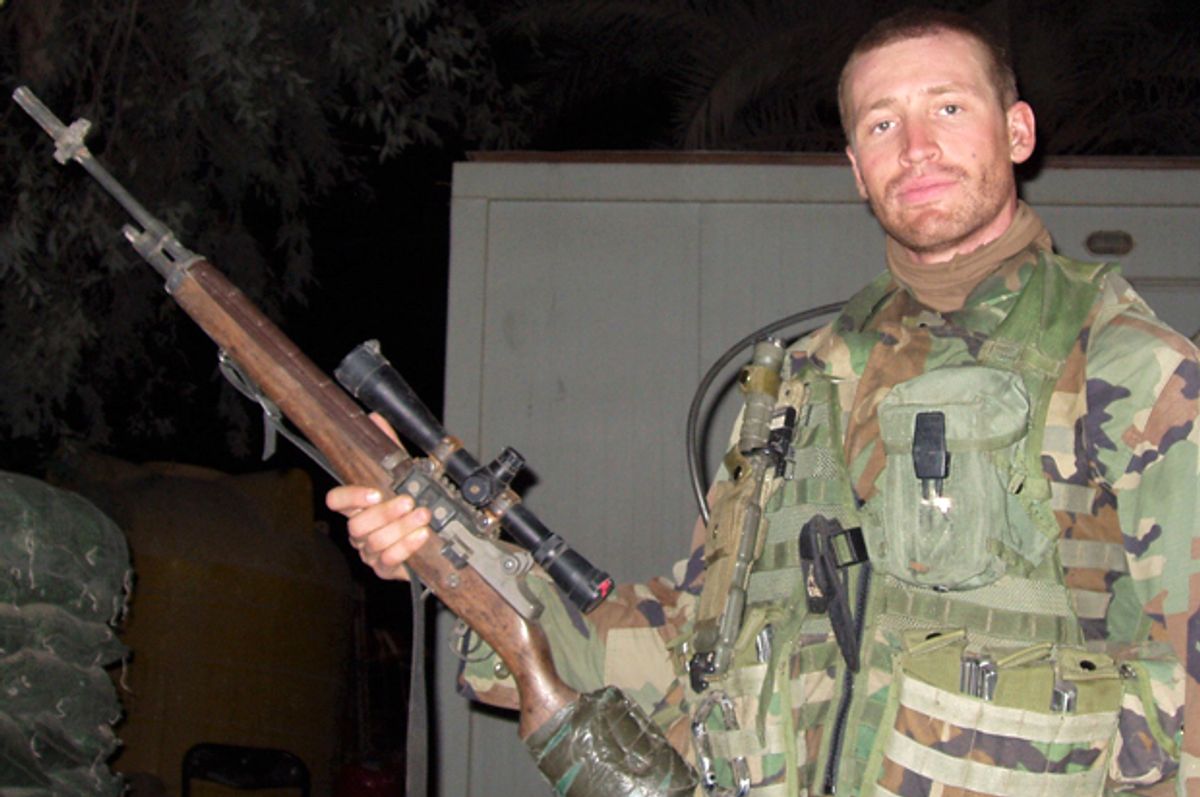 I spent nights in Iraq lying prone and looking through a 12-power sniper scope. You only see a limited view between the reticles. That’s why it’s necessary to keep both eyes open. This way you have some ability to track targets and establish 360 degrees of awareness. I rotated with my spotter and an additional security team member to maintain vigilance and see the whole battlefield. I scrutinized every target in my scope to determine if they were a threat.

In a way, it’s an analogy for keeping the whole Iraq mission in perspective and fully understanding the experiences of the U.S. war fighters during Operation Iraqi Freedom. No single service member has the monopoly on the war narrative. It will change depending on where you serve, when you were there, what your role was, and a few thousand other random elements.

For the past 10 days, “American Sniper” has rallied crowds and broken box office records, but if you want to understand the war, the film is like peering into a sniper scope — it offers a very limited view.

The movie tells the story of Navy SEAL sniper Chris Kyle, said to have 160 confirmed kills, which would make him the most lethal American military member in history. He first shared his story in a memoir, which became the basis for Clint Eastwood’s film adaptation. Kyle views the occupation of Iraq as necessary to stop terrorists from coming to the mainland and attacking the U.S.; he sees the Iraqis as “savages” and attacks any critical thought about the overall mission and the military’s ability to accomplish it.

This portrayal is not unrealistic. My unit had plenty of soldiers who thought like that. When you are sacrificing so much, it’s tempting to believe so strongly in the “noble cause,” a belief that gets hardened by the fatigue of multiple tours and whatever is going on at home. But viewing the war only through his eyes gives us too narrow a frame.

During my combat tour I never saw the Iraqis as "savages." They were a friendly culture who believed in hospitality, and were sometimes positive to a fault. The people are proud of their history, education system and national identity. I have listened to children share old-soul wisdom, and I have watched adults laugh and play with the naiveté of schoolboys. I met some incredible Iraqis during and after my deployment, and it is shameful to know that the movie has furthered ignorance that might put them in danger.

Unlike Chris Kyle, who claimed his PTSD came from the inability to save more service members, most of the damage to my mental health was what I call “moral injury,” which is becoming a popular term in many veteran circles.

As a sniper I was not usually the victim of a traumatic event, but the perpetrator of violence and death. My actions in combat would have been more acceptable to me if I could cloak myself in the belief that the whole mission was for a greater good. Instead, I watched as the purpose of the mission slowly unraveled.

I served in Iraq from 2004 to 2005. During that time, we started to realize there were no weapons of mass destruction, the 9/11 commission report determined that Iraq was not involved in the terrorist attacks on the World Trade Center, false sovereignty was given to Iraq by Paul Bremer, the atrocities at Abu Ghraib were exposed, and the Battle of Fallujah was waged.

The destruction I took part in suddenly intersected with news that our reasons for waging war were untrue. The despicable conduct of those at Abu Ghraib was made more unforgivable by the honorable interactions I had with Iraqi civilians, and, together, it fueled the post-traumatic stress I struggle with today.

My war was completely different than Chris Kyle’s war. That doesn’t mean his war is wrong, and mine was right. But it does mean that no one experience is definitive.

The movie depicts compounded action scenes with very little political and regional context. It was a conscious decision by Clint Eastwood, apparently, to leave out the cause of the U.S. invasion and subsequent occupation of Iraq. It was a conscious decision, apparently, for multiple characters to describe the Iraqis as “savages” and never show any alternative. When I heard of the bigoted reaction some Americans had after watching the film, I was disgusted, but not surprised. Audience members are mistaking Chris Kyle’s view of the war as “the” story about the war. No wonder someone tweeted that the movie made them “want to go kill some ragheads.” It’s sad that such a nearsighted portrayal of Iraqis has caused more people to fear Arabs and glorify violence against them.

It would be refreshing if a big Hollywood movie would take on the task of creating a less dramatized, more nuanced version of warfare. There are some incredible documentaries on the subject. “Occupation: Dreamland” and “Restrepo” capture the life of a service member in a modern deployment without sugarcoating the hard political environment that is a backdrop to the conflicts.

The responsibility to make a picture that takes into account all of the political and social dynamics might not rest on any individual filmmaker. After all, it is just a movie. But that means the public should treat it like that, and educate themselves before jumping to a conclusion that the whole war was just like that. Especially if they support the democratic ideals that Chis Kyle, me and every veteran who put on a uniform swore an oath to defend with our lives.

If you really want to be a patriotic American, keep both eyes open and maintain 360 degrees of awareness. Don’t simply watch “American Sniper.” Read other sources, watch other films about the conflict. Talk to as many veterans as you can, get a full perspective on the war experience and the consequences. Ensure the perceived enemy in your vision is what it seems.

Garett Reppenhagen served as a Cavalry Scout Sniper with the 1st Infantry Division in the US Army and deployed on a peacekeeping mission in Kosovo and a combat tour in the Diyala Province, Iraq in 2004. Garett works as a Regional Director for Vet Voice Foundation and is a veterans advocate and social justice organizer.